Reveries of libraries, the twentieth: BORROWER CARDS AND PASSPORTS 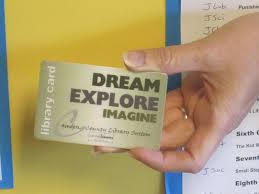 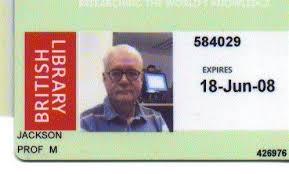 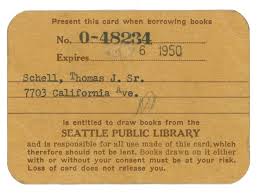 “The library card is a passport to wonders and miracles, glimpses into other lives, religions, experiences, the hopes and dreams and strivings of ALL human beings, and it is this passport that opens our eyes and hearts to the world beyond our front doors, that is one of our best hopes against tyranny, xenophobia, hopelessness, despair, anarchy and ignorance.”

The library card took us to the hardest part of the Grimm’s forest, a place where the house tasted sweet and the oven was for us; to the oddest corners of Lear’s Gladstone bag, where meaningless words turned themselves into complete sense; to the softest landing in Sendak’s dream city, where arguments are resolved by music and you actually meet yourself.

The library card is the smallest page in our wallet and gives access to pages of practicality held together by spiral plastic, American-cut pages of confident prose balanced by unspoken margins, shiny pages of eye-pleasing belief from the history of worldly art, convoluted arrow pages of fix-it manuals folding out into tables of repair, pages of maps all coastline and alps.

The library card is a ticket to the idea we reached for earlier, the philosophy we thought must exist but couldn’t see now, the logic that isn’t like steps in a rational puzzle but leaps from emotion to meaning and back again, the conclusions we know are more than destinations more like the terminus for our next direction, the poetry to be found in the ordinary inarticulate.

The library card is a creased rectangle to the great globe of our and everything’s strivings, a brutal barcode to the transparent beauties transported in simulacra, our overfamiliar name and same old address searching out anyone anywhere anytime anyhow, a string of numbers that is not us say the loans we take and never will be us whatever a computer might think, say the loans.

The library card slips under the radar of cyberspace, cannot be tracked by known or unknown security agencies, could be someone else borrowing the same material, is interchangeable when interfacing with technology, floats in the top pocket untraceable by satellite or drone, suits itself what is listed under its unique status, serves as a bookmark and DVD chisel.

The library card is the strangely exact compact with everything written no longer in a bookshop, everything written by strangers down the street, hours of music the radio forgot, festivals of film the television only dreams about, kinds of talking you don’t hear down the shops, somewhere you would rather be, someone you would rather be with just for now.

The original quote is by Libba Bray, via Talitha Fraser.

Posted by The Carmelite Library at 13:52 No comments: