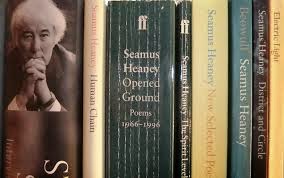 There is a sense in which all Heaney’s poetry is elegiac, in that it celebrates,
rejoices and embraces. Heaney’s poetry is a sustained series of acts of reciprocity for living, thankfulness for lives, gratitude for the words that
he could weave together. All his volumes are sprinkled with poems of dedication.

I want to concentrate on four elegies. Three of these are European poets who suffered under Eastern Europe’s repression.

To the Shade of Zbigniew Herbert

From Out of this World
in memory of Czeslaw Milosz

Audenesque
in memory of Joseph Brodsky

I want to concentrate initially on Ledwidge. There is a small biography of him by Alice Curtayne. More specifically there is a small ‘Selected Poems’ introduced by Seamus Heaney and containing, at the rear, his elegy for Ledwidge. Ledwidge embodies all the conflicts and complexities of the Irish throughout the 18th, 19th and 20th centuries. Back, also, to the Battle of the Boyne in 1690.

And, of course, long before there was the subjugation, the colonization of the country into the anglicized system of assimilation. No wonder, historically, so many Irish fled to Australia leaving behind famine and, as they hoped, the rigor mortis of the monarchy. Sadly the neo-colonists have brought new air to the deadening body.

“In you our dead enigma, all the strains
Criss-cross in useless equilibrium.
And as the wind tunes through this vigilant bronze
I hear again the sure confusing drum……”

Strains, useless equilibrium, confusing drum – our dead enigma. A haunted Catholic face pallid and brave. And so the Easter Rising 1916 – one hundred years next year, and Ledwidge is in a British uniform as his very compatriots in uniform desecrate Dublin and murder the Irish leaders.

He shall not hear the bittern cry
In the wild sky, where he is lain,
Nor voices of the sweeter birds
Above the wailing of the rain.

Nor shall he know when loud March blows
Thro’ slanting snows her fanfare shrill,
Blowing to flame the golden cup
Of many an upset daffodil.

But when the Dark Cow leaves the moor,
And pastures poor with greedy weeds,
Perhaps he’ll hear her low at morn
Lifting her horn in pleasant meads.

It’s when we turn to the Milosz elegy that we taste Heaney’s ambivalences about the Catholic Church, not about the spiritual, but the church as an institution which has done historically so much ill in Ireland and has been as guilty of subjugation and impoverishment as the English. Heaney was very fixed on the idea of the individual being capable of and free to make moral choices. You don’t have to read too many poems to find that imperative. At the same time the saturation of the Catholic faith upon his growing up is abundant.
“ There was never a scene
when I had it out with myself or with another.
The loss occurred off-stage. And yet I cannot
disavow words like ‘thanksgiving’ or ‘host’
or ‘communion bread’. They have an undying
tremor and draw, like well water far down.”

Heaney loved wells. Who said it – “Truth lies at the bottom of a well”? Heaney’s poetry is riddled with ambivalences – historical, cultural, spiritual, personal and domestic. Resolution is never a formula. It’s all in the reading. Generous man, he takes you with him in the generosity of the special and unique voice. The digging, planting, ploughing voice.

“Our road is steaming the turned up
breath. Now the good life could be to cross
a field. And art a paradigm of earth
new from the lathe of ploughing.”

“Vowels ploughed into other open ground,
Each verse returning like the plough turned round.”

He is a participant in the roll-over of life and devoutly wishes to have other participants if they so choose.

It is not surprising that Heaney wrote the elegies for three Europeans – Brodsky, Milosz and Herbert. The complexities and conflicts, the ambivalences and cross-currents of post-war European history mirror for Heaney the experiences of Ireland. He says this:

“In the course of this book, Mandelstam and other poets from
Eastern bloc countries are often invoked. I keep returning to
them because there is something in their situation that makes
them attractive to a reader whose formative experience has been
largely Irish. There is an unsettled aspect to the different worlds
they inhabit, and one of the challenges they face is to survive
amphibiously, in the realm of ‘the times’ and the realm of their
moral and artistic self-respect, a challenge immediately recognizable
to anyone who has lived with the awful and demeaning
facts of Northern Ireland’s history over the last couple of
decades.”

Or is it legitimate to ask: why write elegies? Loss, of course, is one very good reason, but I think that there is more to it than that. Think of the great elegies – Lycidas (Milton), In Memoriam A.H.H. (Tennyson). There is an underlying continuity between the living and the dead that is animated and preserved. Further Heaney was a remarkably generous man. I know that having been a recipient of his generosity as a student (“A” for Poetry Workshop) and a guest in his Strand house.

Then there is, as clear from the poems chosen, a sense of similitude, a conjoint enterprise, that characteristic of sympathetic identification with
another’s life and works. And, above all, the preservation of the continuities of languages and voice. It is not simply anguish and tears at loss, but also, a celebration of those elements and values that make living joyous and embracing, and hope to make death so in its own way.

One of Heaney’s many and life-asserting attributes is his emphasis on hope, the surprise of hope. “Faith, hope and charity”. Hope is a very close relative
of faith.

Among the interesting critical texts to which I have had reference is by
Bernard O’Donoghue:

“On the face of it, these figures of the ‘unsaid’ and the
Inarticulate sound paradoxical in a book dedicated to the liberation
of the poetic voice. But Heaney’s poetic voice is, in a way,
one of Foster’s ‘professional intermediaries’, giving a voice to the
voiceless. After all, what elegy does is to give voice to the
terminally voiceless. There are two senses in which this book is
elegiac: first the obvious one, that it contains some of the finest
elegies in modern English poetry (in an area, incidentally, where
modern Irish poetry is particularly strong: for example, Longley,
Muldoon and Michael Davitt); but the book is elegiac, too, in its
homesickness for Ulster. The figure of the homesick Ulster poet,
Sweeney, has been in Heaney’s head throughout the 1970s, and
the translation of his deracinations will be his next literary project,
Sweeney Astray.
But the poet homesick for the North is already manifest in a
number of ways in Field Work: obviously in the vernacular usages
quoted above, all of which are as foreign to Southern Irish English
as they are to Standard English. But there is also a celebration of
Ulster consonantalism, of the kind quoted above from W.R.
Rodgers, especially in the poem ‘The Singer’s House’, written for
Heaney’s friend David Hammond, who is one of the best
Contemporary Ulster folksingers:
When they said Carrickfergus I could hear
the frosty echo of saltminers’ picks.”

What Heaney does show and tell us is that you have to work hard with the pen . A poem is not a spontaneous overflow. Words have, like lozenges, to be sucked for the very core of their meaning (grammatical, syntactical and etymological meaning). Shaping is like sculpting – hammer and tongs. Read “The Forge”, a poem of practical spirituality, a refutation of historical irrelevance and an acceptance of the community that has put an end to a blacksmith’s existence.

Heaney is a wonderfully embracing man who wants us all to be morally responsible and independent participants and sharers in an egalitarian society. He is, among other things, the poet of the demos, the Prospero of the kingdom of poetry whose revenge is directed at those who would deny poetry, relegate it, treat it as irrelevant, subjugate and deny the moral individuality of the person in the paddock or in the suburbs. His poetry was for everywhere and everyone not just for you and me.

“Where unambiguous assertions of faith issue from one militarized camp or another, a judicious ‘faults-on-both sides tact’ can be a politic alternative. Heaney takes an ethical stand against the self-righteous arrogance that destroys writers as well as nations. His ideal of organic unity provides a model for a democratic state in which different factions work in creative proximity, just as contrary sympathies do in his mind and poems. As the sequence of prose poems crosses back and forth between these differences, Heaney repeatedly returns on himself, bringing his highest hopes for peaceful coexistence down to earth for candid analysis and raising his deepest fears and biases up for lofty moral scrutiny. Doggedly self-reflexive, Heaney in Stations offers a spiritual and autobiography that amounts to a self-crucifixion. By stressing natural and supernatural analogues of his artistic development, he makes his story both biological and biblical and contributes an intriguing self-portrait to the many-roomed house of autobiographical fiction."

If you’d like to turn to a poem which is lyrical, pastoral and elegiac, you could do worse than read the redemptive “At a Potato Digging”. (in Death of a naturalist) This is an elegy for the victims of the 1845 famine. Or  “Requiem for the Croppies” (the Wexford boys with cropped hair) This latter poem was written to commemorate the 50th anniversary of the Easter Rising of 1916. Heaney turns to 1798 as being the seed bed of the rising. Next year is, of course, the 100th anniversary. You can still see the bullet holes in Dublin.

for Lieutenant Michael Malone,
shot in Dublin in his home on Anzac Day 1916

When you see the Guinness boiler-barrel rolling along.
Masquerading as something armoured and strong,
It is not difficult to know
That desperation always masks a bravado show.

I was silenced by the shadowed plaque on the wall,
It’s only now I can engage in a puny recall.

Here we, too, remember the red, white and blue,
As we had once danced to that tune too,
As our bodies rolled into the Turkish turf,
Shot down riding a distant, different surf.

In preparing for this offering I have

had regard to the following:

Posted by The Carmelite Library at 02:53