Reveries of libraries, the twenty-sixth : FIVE HUNDRED SHADES OF FIFTY SHADES OF GREY 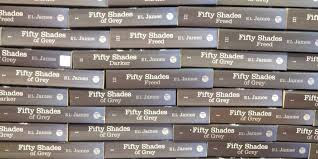 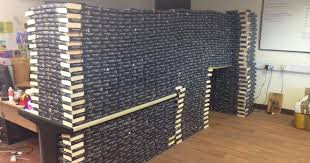 Book forts, book counters, book tables, book pyramids, and other book furniture are being bricked into place all over the globe. These solid constructions made from hundreds of copies contradict the prophecies of academics and marketeers about the death of the book, even if some resemble a mausoleum. The tower of babel never looked so much with us as when we encounter it firsthand in the foyer of a public library, each paperback neatly lodged on top of another.

Celebrated amongst these constructions is the wall of ’50 Shades of Grey’ (a soft porn bestseller by E.L. James) devised by the staff of the second-hand seller Goldstone Books of Ammanford, Carmarthenshire in Wales. Plainly this is not a novel that readers care to keep on their shelf for the long term, as dozens of copies kept arriving at Goldstone on a regular basis. Faithfulness to the author is not in their make-up. Repetitiveness, I am told, is a weakness of this book, hence seemingly the repetitive arrival of second-hand copies, none of which are likely to be going anywhere else in a hurry. The book was picked up, perved through, then indiscriminately chucked away. Confronted by this avalanche of grey, Goldstone staff made a feature of what they could not hide.

Over five hundred years of the printed word have contributed universally to the black-and-white views of generations of readers, as well as every shade of opinion in between. The earth gives and the forests turn into books, explaining the fairy tale that is supposed to have a happy ending. Earth wakes again and birds lend their quills to the unending retelling of migration and nesting and song. The earth provides the taproot of ink to impress, as birds’ feet in wet sand, the picturesque alphabets of generations. That which was born incunabula grew into a hydra.

Unquestionably the outcome of immersing this heady and colossal, indeed unquantifiable, heritage of print in water would result in fifty shades of grey pulp. This soggy misfortune would never be rectified by a pre-planned digitisation program, which would be like watching fine sand drizzle through an hourglass forever. When Prospero determines to drown his books does he rid himself of Hamlet’s pretty text? Even then, words would bubble to the surface somewhere, oxygen for the listener keen for a sign, or just a bit of haiku in a grey world.

Libraries know that, along with insects, mould, and fire, water is one of the enemies of books. Their practice is not to celebrate profligacy or prolific excess. Even the very largest of libraries came that way through precise selection, the preference for one book and not the other, the compilation of the best that is thought and said (they think), requiring further storeys or extensions across the whole precinct, across the river and into the trees. How many poems are made in praise of the airiness of libraries? They whisper the whispers in the stacks, the convoluted conundrums of the carrels, the revolutionary repartee at the front desk, with its five hundred shades of novel. They catch fire, and in unexpected displays.

Fire of my loins, fire of my being, fire of nights and days, pants ’50 Shades of Grey’, hot pants being the disposable poetry readers want more of. The shades of ash resulting in this two day incendiary romance lack the colour we hoped for in the reading relationship. Disillusion leads to acceptance that this relationship was destined for the church book fair, thence to wash up as a brick in a Welsh bookfort. Or worse, the flames of the home fire, deep in the snowy depths of winter, where the printed pages are kindling for an evening of unsurpassed pleasurable warmth. Some people call this wisdom.

The night is a black beauty and day a white wonder, yet nothing is quite so black-and-white. Staff at Carmarthenshire return to work, their counter starting to curl at the corners, sagging here and there from neglect. The stock that moves has more bite, more oomph, more colour, and something else to say. It has broken out of prism. The something else, it seems to be saying, is get out into you element, figure out how it works, learn from others, turn your alphabet to effect. Don’t add to the waste of affairs that end up on the shelf, or end up a shelf. 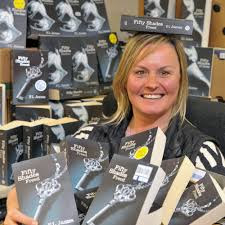 Posted by The Carmelite Library at 15:00