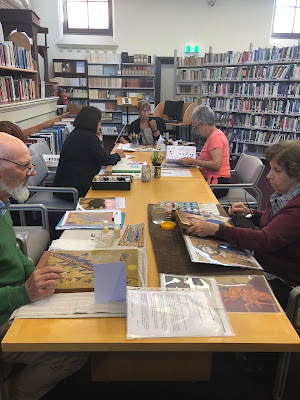 Seraphim Icon Group at work in the Library during the Symposium this May
In Session Five (Friday 24th of May) of Ways of Seeing, the Carmelite Centre’s three-day spiritual workshop, iconographer Rob Gallacher spoke on discovering contemplative prayer with icons. Here is Rob’s introductory paper to the session.

Let me introduce this session with some words from Aidan Hart   (Beauty, Spirit, Matter p.2)

“The icon is as radical way of seeing, and therefore suggests a radical way of acting.   When we look at an icon we see as a saint sees.   We are inside their head and heart and looking out through their eyes.   For when a saint sees a filthy homeless person he sees a prince of the King of Heaven.   When he sees a slug he laughs with joy to see the humour and practicality of its Creator.   For the saint sees not just with the eye of his body but with the eye of his spirit.   He sees, as it were, in four dimensions and in full technicolour, the inside as well as the outside of things.   In short the saint sees things as they are.”

While I can resonate with these words, my own experience is slightly different.  Certainly when I became involved with icons I saw things, and people differently. But it was more like this:

I was in a situation that was causing me to feel stress. I had the usual symptoms, sleeplessness, tummy ache,  and a brain that was churning at high speed and wouldn’t turn off. I saw that John Bayton had started an Icon School at St Peters, Eastern Hill, and I decided to join.  John’s methods were extremely painstaking, and that was one thing that slowed me down. But more importantly, the icon gave me a sense of perspective.   It lifted me to a vision of the greatness of Christ that made the disputes in which I was involved seem small. Then I saw that the icon I was using as a model had survived wars and revolutions, plagues and famines, and that however the arguments of the people around me were resolved the icon would go on delivering its message.
So I became less judgemental. I saw people as all God’s children rather than as being on my side or otherwise opposed.

And I discovered a different way of praying, a way of dwelling in the world the icon opened to me.   I call it contemplative prayer.

Consider the Australian crucifixion. The cross is outside the city. Traditionally the city wall would be in the background, but it seems to me that in today’s terms, the world of the crucified lamb of God is different from that of the opera house, the MCG, or factory filth.   So these replace the wall.  We are outside the city in a similar but modern way. Secondly, there are the Mother of Jesus and the Beloved Disciple. With the words,  “Woman behold your son”  and “Son behold your mother” Jesus established a community of mutual caring, characterised by the sacrificial live he is displaying on the cross. This is John’s image of the church that will carry on Christ’s work of redemption when his earthly life is finished.

It is a different way of seeing.

Take the Transfiguration icon and study the mandorla. It took me a long time to realise why there is the dark colour at the centre. It is a way of expressing the spiritual journey.  When you first see the light of Christ, the world is illumined with a bright, light blue light.   But as you start to see the world differently those sharp distinctions, those clear cut judgements about people, become a little blurred or modified. It is like entering a cloud or a fog. The more you perceive the greatness of God, the deeper the mystery becomes, until you come close to the giver of light, who is beyond light, the darkness at the centre. The cloud of unknowing.

Blue is a fortunate choice for divine light. Think about the sky.  You see blue, but you know that there is a world of wonder beyond. The darker the blue the more of the mystery you see. But you know that all that is out there is infinite, and humankind will just go on perceiving a bit here and a bit there. So it is with the world of the spirit.

Our experience at St Denis in Paris. Abbot Suger (1081 – 1151).  He built the first Gothic Cathedral.  Only the ambulatory remains, but it is enough to perceive how he used blue light for divine light.  When I entered it seemed dark and hard to make out the art work and the tombs. It took about half an hour, and then I began to feel at home in a strange way.    All was bathed in this deep blue, but now I could move around with ease.  I could see, but I was seeing differently. A bright light would have had another effect – a focus on objects rather than atmosphere.

Hart Again, (page 3),
“Divine beauty is one of the rays of light coming from the One (God)……    This divine beauty is splendour and glory,  a radiance which, if we are willing,   makes us like itself.”

Let me break that down a little.   How does the icon help us shine with divine radiance?

First, by faithfulness to Scripture.  The icon has to be as accurate as a translation. But it can brings passages together in a way that words can’t.

Consider this Baptism icon. Not only is John the Baptist caught in the act,  but Jesus is naked, cf. Philippians 2:  “He humbled himself”.
Angels ministered to him, as after the Temptations  (Matt 4:11).
To be raised with new clothes.   Paul speaks of putting on the new,   Ephesians 4:24:   “to clothe yourselves with the new self,  created according to the likeness of God.”
And, on one side there is desert, while on the other it is a fertile paradise.   Romans 8:21:   “the creation itself will be set free.”
If you want to be politically correct you can relate that to global warming and climate change,  which adds significance to “Already the axe is laid to the root of the tree”  Matthew 3: 10
Hart speaks about seeing with the eye of the heart  (page 47) and uses Moses as his example.   The bush had always been burning, only he had not had his eyes opened to see this.   This icon speaks to me of the call of God which is ongoing, and of the I AM who always is.

As well as putting me in touch with Scripture, the icon also involves me in the tradition of the church.   Take, for example, the Mandylion.   Eusebius, c 250 CE, included a story about Angar 5th.   He was king of Edessa at the time of Christ.   He had leprosy.  Abgar sent his servant, Ananias, to fetch Jesus so he could be healed.   When Ananias approached Jesus he was washing his face.   He said he could not go,   but gave Ananias the towel he was using.   The imprint of Jesus face was on the towel, and Abgar was healed. Whether or not there is truth in the story, as our western minds judge truth,  there certainly was a towel with a face on it.    It was produced when the Persians attacked Edessa in the 5th century.   It was cited at the 7th Ecumenical Council in 787.    It was part of the price Edessa paid to Constantinople for protection against the Turks in the 10th century.   It became the palladium of the city of Constantinople until it was lost during the 4th Crusade in 1204.   But by then there were copies,  eg the Holy Face of Laon.   Painted in the Slav states, as the writing shows, it was given by Pope Urban IV  to his sister, Sybille, in 1249.   She was Abbess of a nunnery in France.   In 1679 it was installed in a silver reliquary.    A century later came the Revolution.   During the reign of Terror it was seized and the silver was melted down.   But the icon itself was sequestered by Administrator Lobjoy, and hidden till 1795,  when it was taken to the Cathedral of Laon,  which is where it now is.

Contemplate your own experience in the light of this tradition and you will come to a very special Way of Seeing.
Posted by The Carmelite Library at 22:09