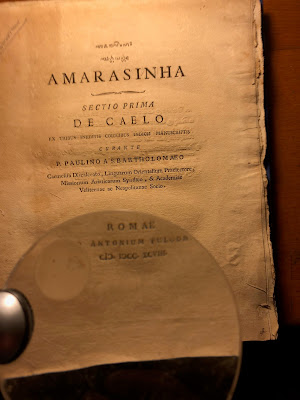 Amarasimha, here Amarasinha (5th-6th c. CE, though even that is narrowing down his possible dates) the first part of his ancient Sanskrit dictionary Amarakosha, translated into Latin, with commentary. (Rome, 1798). Notes: This superb book is one of the earliest translations of what is thought to be the oldest thesaurus of Sanskrit terms. West meets East. The Latin of Paulinus a S. Bartolomaeo (1748-1806) reveals how ‘De Caelo’ moves from synonyms for the heavens to names of Indian deities, each with their own special powers or virtues. The thesaurus worked as a rhyming mnemonic, leaving us marvelling at the added levels of sophistication of the original. The title page presents a bio-line of the Carmelite at time of printing, which can be picked out even by someone with no formal Latin: “Carmelita Discalceato, Linguarum Orientalium Praelectore, Missionum Asiaticarum Syndico, & Academiae Velieternae ae Neapolitanae Socio.” Similar strings of achievements in other records I found disclose that he worked with the Malabar Mission in India, when not sifting manuscripts at San Pancrazio in Rome. He is typical, in this regard, of the brilliant linguists who gravitate to la Città Eterna in every century, busy about it in the Bibliotheca Apostolica Vaticana and other babbling booknooks. WorldCat led me to a very good record at the University of California Berkeley which contains a wealth of information ‘outside the book’ to describe this very rare one. 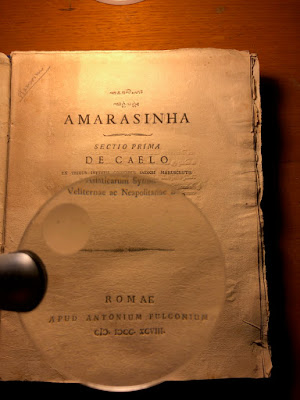 Posted by The Carmelite Library at 03:02