Albrecht Dürer’s Melancholia and the Internet 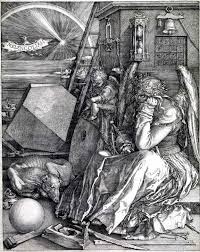 But if Dürer did not try to peer so deeply into the inner life of nature, as Leonardo did, nor feel its appalling independence, he was deeply engaged by the mystery of the human psyche. His obsession with his own personality was part of a passionate interest in psychology in general; and this led him to produce one of the great prophetic documents of western man, the engraving he entitled Melancholia I. In the Middle Ages melancholia meant a simple combination of sloth, boredom and despondency that must have been common in an illiterate society. But Dürer’s application is far from simple. This figure is humanity at its most evolved, with wings to carry her upwards. She sits in the attitude of Rodin’s Penseur, and still holds in her hands compasses, symbols of measurement by which science will conquer the world. Around her are all the emblems of constructive action: a saw, a plane, pincers, scales, a hammer, a melting pot, and two elements in solid geometry, a polyhedron and sphere. Yet all these aids to construction are discarded and she sits there brooding on the futility of human effort. Her obsessive stare reflects some deep psychic disturbance. The German mind that produced Dürer and the Reformation also produced psychoanalysis. I began by mentioning the enemies of civilisation: well, here, in Dürer’s prophetic vision, is one more way in which it can be destroyed, from within.

This lithe linguistic reconstruction of Albrecht Dürer’s engraving first came to general attention via television in 1969. As a fourteen-year-old viewer I was fascinated by how the words, so precise and direct, could describe the work while at the same time explain its meaning. The words came from Kenneth Clark, a lean patrician Englishman who seemed ever to be in some sort of pain to tell us exactly what he thought of any artwork. This particular passage of Civilisation (ess, not zed) was also striking to me because Clark was effusive about the negative message of the Dürer, a change from most of the show where he chose to accentuate the positive. It is this “brooding on the futility of human effort” and its effective explanation that has stayed with me ever since. The concept that learning, the humanities and the sciences, could be a burden as well as a liberation, a source of unhappiness as well as happiness, had been put into my mind. Clark was sending his viewers a warning, of which there are many in that series.

It was about the same time that we all went, one morning, on a school excursion to the IBM Building in Fitzroy Street, very near St. Kilda Junction in Melbourne. We had been popping holes in flimsy computer cards for some weeks, our objective being to send some no doubt elementary message into the monster machine on the ground floor of the place we were now visiting. Dimpled chads hung from the cards of some of the lazier students. The computer must have been two storeys high maybe, inside the building, and this was its main impression. Maybe it was its only impression, as there is only so long that schoolboys can stare at the walls of a large box before going ape. Serious men walked about the place, pointing out where things went in, why lights went on, and using statistics the while to wow us into submission. The scientists among us were wowed, the rest were wearied. I suppose what we were doing was Fortran and I have no idea really how high the computer was, it just felt that way. It would have been about the main computer in Melbourne at the time. Maybe it was the only computer, in Melbourne.

Over forty years later, and a whole lot wiser, there are days when we each stare at our personal computer screen with all the brooding melancholia of Albrecht Dürer’s dark angel. Like other sophisticated technological advances, the internet is thought of as, by nature, a civilised and civilising force. Its existence often goes unquestioned, as its presence approaches ever more toward omnipresence. Even omniscience. When an operation like Google brags that it wants and will have all knowledge available online we respond, “only in America”, knowing ourselves that such an objective is never attainable. There are more things in heaven and earth than are dreamt of in our philosophy, as someone who is not German once wrote. But what has already been assembled online is beyond any one human to absorb, in fact. It is impossible to find everything of personal interest over a lifetime out there. Depending on your day, the internet is a godsend, a singular super-signifier, a handy device, a regular update, a miasma, a mess of messages, or a monster. Because we cannot now live in communication with society without talking, sometimes quite frequently, to a computer, its hold on our lives is potent, if not quite omnipotent, yet. We stay on course, or stray off track, or play. We peer deeply, or not deeply, into the inner workings of billions of tiny electronic connections. If we treat the thing as a tool and a game, we can keep ourselves lively.

If we think too hard about our appalling dependence on the internet, then we might start to worry. Upload and download lead to overload. We wonder what all of this information is doing to our minds. Google Image is so inexhaustible, it’s exhausting just thinking about it. One effect that must happen to many people is the melancholia observed in the gaze and posture of Dürer’s figure. While it inspires passion and interest, the internet can also lead to a simple combination of sloth, boredom and despondency, as common in literate as in illiterate societies. Kenneth Clark’s version of Dürer’s engraving causes me think of the internet, its potential for good and bad, and the thousands of wonders it leaves lying about. To borrow Clark’s own words, the internet reminds me of humanity at its most evolved. Her wings are the added lift we get from gaining information while not leaving our seats. The compasses, symbols of measurement by which science has conquered the world, define the space between my computer and the one I am visiting on the other side of the planet. The internet is chockfull of the emblems of constructive action, yet how effectively do we use them? Or are they just scattered about unused? Our search strategies are a saw, a plane, pincers, scales, a hammer, and a melting pot, yet we may find ourselves on occasion sitting here at the screen, pondering the awesome scale of knowledge and brooding on the futility of human effort. The polyhedron and sphere are the inanimate beauties of our thought, like the boxes that house our computers, but it is the dog at the feet of its mistress, sad and sleepy because her mistress is immersed and unhappy, that is the real beauty within the frame. Is the internet one of the “the enemies of civilisation”? Clark’s Spenglerian language, loaded as it is with ominous signals, sounds heavy and misplaced. Melancholia I has a ladder going into the sky and an hourglass with plenty of time to go. It has a rainbow across a sea and scales to balance the information. These are all positive symbols we could apply to the internet, once we are in the mood to use them.

Posted by The Carmelite Library at 19:25