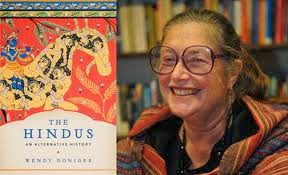 Wendy Doniger is a modern English translator of some of the central writings of Hinduism. For those of us who run theology libraries, her name is associated with an English version of the Rig Veda, with translations of the Manu Laws, and other magisterial Indian texts that are the bedrock of religious meaning in the Subcontinent. She is a formidable Sanskrit scholar, an Indologist teaching at one of the hubs of religion studies in the United States, the University of Chicago. Wendy Doniger, we have known for years, is a serious representative of the pursuit of understanding about Hinduism.

None of these elementary facts seem to have impacted on the minds of protesters, bloggers, critics, and others involved in recent days in an eruption of vitriol directed at her 2009 book ‘The Hindus : An Alternative History’. In an intense legal action brought about by certain conservative and nationalistic, perhaps fundamentalist, Hindu groups the publisher Penguin India has been forced into a humiliating backdown in which it has agreed to pulp all remaining copies of Doniger’s book unsold in India. The consequent war of words online and elsewhere is easy to google.

The Carmelite Library holds several of her books because they are amongst the best, sometimes the only, modern versions of Hindu foundational works. ‘The Hindus’ was ordered immediately upon publication and has stood for some time now at 245.2 D683, available for loan any time during opening hours. My attention was drawn during its cataloguing to Doniger's excessively enthusiastic assertion that the Mahabharata, Ramayana and other ancient Hindu texts are "a hundred times more interesting than Biblical and Homeric texts". This is not something you hear every day. More interesting? A hundred times more interesting? Clearly we have a fan here. It is a statement it was hard to forget.

Doniger’s assertion comes from a deep desire to privilege Indian scripture and literature up against the major ancient works privileged by the West and its scholars. As a Sanskrit scholar she goes out to bat for India, as it were. She wishes to draw attention to these giant texts by engaging in her own battle of the giants. One can be sympathetic with her attitude, especially after we encounter Bibliolators and those who would turn the Bible into a paper pope. Western literature itself suffers from a lack of creative exposure to the Mahabharata and Ramayana, something that Doniger strives to correct through her translations, but also through her rhetorical flourishes. It’s her field and she is going to make a noise about it. We could all gain by increased absorption in the ancient writings of Asia.

To say something is a hundred times more interesting than something else is flamboyant argument. Interest is in the eye of the beholder, it is not based simply on someone else’s opinion, which is why all of this writing, East and West, will continue to have a readership.

The assertion tells me that Doniger is such a strong advocate of Hindu literature that she will say anything to grab more attention to its cause. She is colourful, that’s for sure, and perhaps that colourful form of argument finds its way as well into ‘The Hindus’. Reader, beware! But still, such strong advocacy would, you think, be just what Hindus in the Subcontinent should be cheering for, more attention being paid in the West to the formative classical scriptures of their religion. Instead of which, we see a powerful small minority of Hindus acting on behalf of the whole religion to make her book invisible in India. That the vast majority of Hindus have never heard of Wendy Doniger was the case, until this week. Now they can download ‘The Hindus’ or read it on the internet, in order to make up their own minds. They can follow the whole argument in the newspapers and probably learn more about the ins and outs of her theories than if they attended a seminar on the subject at the University of Chicago.

The Hindu hardliners have got their headlines. They went for the big target and have won, in their view, an important victory. This will not stop discussion of Wendy Doniger’s ideas about Hinduism, in fact will assist in an increase in book sales. The book has not been banned, it has just disappeared from sight. Hindus do not issue fatwas, otherwise she would be up there on the front page with Salman Rushdie. Whether her theories have an impact on thinking about Hinduism only time will tell, but this scandal, like so many scandals, has served to get people reading the book who would otherwise never have known about it. The one country where it will not be available to students for discussion, of course, is India itself. This must be causing some disquiet among academics in that country.
Posted by The Carmelite Library at 19:16