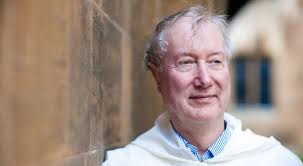 On Tuesday the 16th of April Susan Southall conducted a Spiritual Reading Group in the Carmelite Library on the English Dominican Timothy Radcliffe. Here are the quotes from his writing that were used during the session.
Quotes from The Dominican Way Edited by Lucette Verboven London, Continuum, 2011 (DW) and I Call You Friends. London, Continuum, 2001.(CF)
1.      Thomas Aquinas stated – and this is at the very heart of his theology – ‘What God is, we cannot say.’ Words cannot enclose God; they can only let us approach the edge of the mystery. We can say true things about God. For example, I can say that God is good, that God is one, that Christ is risen from the dead… but we cannot know fully what that means. I cannot know what it means for God to be God. There is a paradox in our Dominican spirituality, a tension I find very inspiring: we claim friendship with God, but this friend is the One who is beyond words.
I repeat, to say that God is beyond our understanding does not mean that no statement of the truth is possible. If someone says that Jesus did not exist, that he did not rise from the dead, I believe that he is wrong: I can make statements that are true, but I cannot wrap it all up. Heresy begins precisely when someone claims to know the whole of the truth. Heresy consists of trying to shut God up in a box, to reduce him to my little grasp of the truth. Dogma, conversely, seeks to loosen our possessive little grip, so that truth may disclose itself ever more… Dogma propels me on a journey towards the truth. (CF 81-82)
2.      I fell in love with (Dominic’s birthplace in Spain). I fell in love with the light that pervades everything, its clarity, its luminosity. I believe that this light is typical of Dominic, his ability to see clearly, to recognize people’s humanity, their goodness, their suffering. Truth is perhaps in the first place a light that reveals the beauty and goodness of God’s world, and also its suffering and pain.
For this reason there is a close link between truth and love. This is strange, since we usually think of love as a nice warm feeling and has nothing to do with the mind. But loving another person includes trying to understand who he or she really is. Growing in love implies coming to understand them, see through their eyes, penetrate their humanity; and growth in understanding overflows in love. Our contemporaries tend to think of knowledge as cold, an impersonal detachment, keeping a distance. The Bible suggests otherwise, the word ‘know’ means a most intimate, indeed a sexual relationship. Knowledge implies intimacy. Love helps me to know the truth, and the truth helps me to love. (CF 80)
3.      You can see that this century has been crucified by the worship of state power, the worship of blood, the whole Aryan mythology of Nazism. People were worshipping a false god. At the moment the ideology of the global market is reigning. But that is a false god. It seems to me that the role of the Church is not to invite people to belive; because everybody believes — but they believe crazy things; they believe in fate, in the stars, in horoscopes.  What we have to do is to discover belief in the God who will liberate us from slavery. Most false gods demand that we bow and worship. But our God tells us to stand up and be free. (DW 10-11)

4.      We often think of spirituality as nice and warm and doctrine as arrogant, abstract and incomprehensible. But doctrine is exciting and liberating. When you get involved with Christian doctrines — the resurrection, the Trinity, the divinity of Christ — you are invited on an adventure in the discovery of the truth. Doctrines don’t close our minds, they open them. I think it’s unfair to young people to give them just a nice vague spirituality. It’s boring. (DW 111)

5.      Is celibacy the problem that has led to sexual abuse? I don’t think so. All the statistics we have for Britain and the United States show that married clergy fail just as often. I think the problem is not celibacy but a form of clericalism where priests in many denominations and in many faiths think that ordination makes them powerful. Abuse is the misuse of power… We also have to rediscover that the most important sacrament is not ordination but baptism. (DW 202-203)

6.      I think the crucial question of the Church today is lay leadership, rooted in baptism. So we need lay Dominicans who will be lay leaders, and that requires a good theological formation to understand their specific role. It’s bad enough to have the clericalization of the Church, it would be even worse to have the clericalization of the laity!
We must bear in mind that the renewal of the Church has often come through the laity. Who are the three great patron saints of Europe? St. Benedict, St. Francis of Assisi, and St. Catherine of Siena. And what do they have in common? None of them were ordained. S we must have confidence in the vitality of lay people. (DW 216)

7.      To see the goodness of another person often requires certain repose. We must be with them, unhurriedly, wasting time with them. If we are rushing then we are more likely to see them in functional terns, as useful or hindering our projects. The perfection of love implies leisure, in which we can be receptive to another, almost passively attentive.

8.      Preachers must discover their own voice and their own way of being, otherwise they will not speak authentically.  Some … Dominicans preach through art, others through writing or speaking, or by working for justice, or just by the silence of the monastic life. But all of them have authority because they speak as themselves, as the gifted, vulnerable, particular people they are. God’s joy and beauty must reverberate through their particular flesh and blood humanity. We believe that our God became human, and so we must become human too if we are to speak well of God.  (DW 1)

9.      When we say yes to God, we set out on a journey in the course of which our reason helps us to advance towards a glimpse of the mystery. So I truly believe that faith calls on reason. But likewise, reason needs faith; otherwise, it lacks foundations. You could put that another way: with the incarnation, God embraces all that is human, all that we are – our sense of beauty, our capacity for love, and, likewise, our ability to think. If Christ became human, then, in a certain way, our intelligence is blessed by God. We should make use of it. (CF 86)

10.  Then there are others who have difficulties with the Church not because they hate but because they are living in a relationship that conflicts with the Church’s teaching, such as unmarried couples, divorced and remarried couples, practicing homosexuals, and so on. We should first of all recognize that at the heart of their relationship is love. Any love, as love, is good, is God’s presence. We should recognize this and give it its value. The moral teaching of the Church should never consist of telling people that they should not love someone… We have to understand how they see the world, learn what they have to teach us, see through their eyes, grow in mutual trust… God’s friendship with the human race is the very heart of the gospel. So we cannot express our deepest moral convictions except in a context of friendship. (CF 97)

11.  It may appear strange to talk of a spirituality of truthfulness. Obviously the preacher must say only what is true. But I believe that one will only know when to speak and when to be silent – that balance of confidence and humility – if one has been trained in acute discipline of truthfulness. This is a slow and painful asceticism, becoming attentive to one’s use of words, in one’s attention to what others say, in an awareness of all the ways in which we use words to dominate, to subvert, to manipulate rather than to reveal and disclose. (CF 204)

12.  Friendship may seem a strange way to use to speak about God’s love. It can seem a bit cold compared to the usual vocabulary of passionate spousal love. But for the first Dominicans it revealed something crucial about love…. St. Thomas called friendship ‘the most perfect form of love’ because it is not possessive, because it values equality among persons, because one seeks only the good of the other. So it does illuminate some aspects of the divine love of the Trinity, the perfect equality of the Father, the Son and the Holy Spirit. This is an equality that we are called upon to practice as brethren in the Order. (CF 50)

13.  The word ‘master’ sounds very grand, but Dominic chose the title because he did not want to be an abbot. Master originally means ‘teacher’ and doesn’t imply bossing people around. In the Dominican Order, we are called friars or brothers and not monks. The first thing you learn is that you are no more and no less than a brother. When people arrive at Blackfriars, Oxford, they sometimes ask is if we are a father or a brother, and, even though we are ordained, we are taught to reply, ‘I am a brother’. I remember a visitor who saw a young man at the door cleaning the floor. He asked, ‘Are you a father or a brother?’ The young man said, “I am a brother’. And the visitor said, ‘Well, brother, get me a cup of tea’. So he went and got a cup of tea. Then the visitor said, ‘Now, brother, take me to my room’. So he took the visitor to his room. And the visitor said, “Now, brother, I wish to meet father prior’. And he said, ‘I am the prior!’  (DW 8)

14.  We are tempted to make the truth something that we possess, our property. We wrap it up in a few formulas. We try to master it. And this is not surprising in a society which is dedicated to private property…But God’s word cannot be owned… It breaks open all our attempts to trap it in our words. It busts open our little ideologies. The word of God is truth that searches and probes us…the Bible is not a book that we read, it reads us. (CF 170)

Posted by The Carmelite Library at 17:06