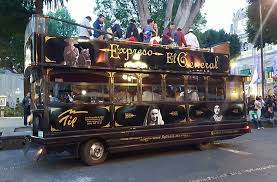 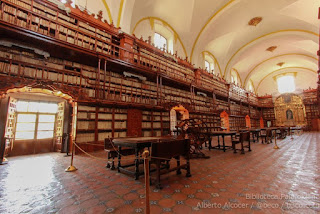 “Upon entering the massive carved wooden doors of the Palafoxiana Library, one is struck by the rich Old World scent of fine furniture and leather-bound books,” says our guide Angela Schuster. “The morning sun beams through the windows of a high vaulted ceiling, playing off the voluptuous baroque ornament of the three-tiered bookcase that envelops the room. Narrow staircases and walkways provide access to the stacks, their shelves lined with early editions of Vitruvius, Homer, and Seneca, commentaries on Canon Law, and treatises devoted to all manner of scientific inquiry—most bound in goatskin, their titles rendered in sepia script.”

Juan de Palafox y Mendoza, Bishop of Puebla (1600-1665) established what most people regard as the first public library in the Americas, the Biblioteca Palafoxiana, on the 6th of September 1646: https://www.youtube.com/watch?v=W2Gwq-7-QHk

But Angela continues, “Savouring the library’s seemingly timeless ambience, it is hard to imagine that […] this great repository of learning in the heart of historic Puebla de los Angeles, Mexico, lay in ruin, rocked by an earthquake at 3:42 on the afternoon of June 15, 1999. The quake, which measured 6.7 on the Richter scale and damaged many of the city’s famed historic buildings, sent a wave along the library’s south wall, cracking its masonry and causing its bookcases to ripple and fold. Stacks on the north wall, anchored by the more substantial architecture of the Colegio de San Juan y San Pedro, buckled and sheered under the differential strain, sending myriad rare volumes tumbling to the ground. In less than a minute, centuries of scholarship collapsed in a massive heap of dust. Still further destruction would come three months later, when a second quake struck on September 30.”

The full text of Angela’s tour and the story of the Library’s restoration can be read here: https://www.wmf.org/project/palafoxiana-library

Two entries on the Carmelite Library blog, one about Bishop Palafox, the other about the Library’s celebrated bookwheel, are here:

Posted by The Carmelite Library at 15:05