‘To Call on His Name : Perspectives on the Jesus Prayer’ by John Gill BOOK REVIEW 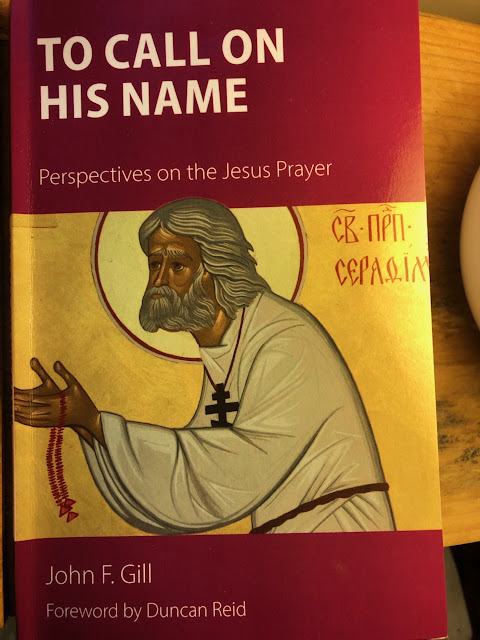 John Gill is a member of the local Melkite Church in Melbourne. His discovery of Eastern Orthodoxy came while reading the Russian spiritual classic ‘The Way of a Pilgrim’, with its explanations of the Jesus Prayer. John was “surprised to find that there was a dearth of material relating the Jesus Prayer from the East to the prayer traditions of the West,” with one outcome being his book ‘To Call on His Name : Perspectives on the Jesus Prayer’ (Sacristy Press, 2019). The book is about prayer life itself, starting in Scripture and the words of Jesus when asked how do we pray.

Through the development of hesychastic practice in Orthodoxy, separating oneself from the passions through prayer, vigils, and good works, Gill says the Jesus Prayer, of which it is a part, became “not merely a practice, but rather a complete approach to the whole of Christian life. It can become a way of constant prayer, but “to be efficacious the invocation of the Name of Jesus requires genuine faith.”

This ‘exploratory journey’, as he calls the book, as well as foregrounding what we know of the Jesus Prayer and its evolving use, also takes care to acknowledge what we don’t know. One lively chapter is entitled ‘Precautions and controversies’.

The author makes connections with mantra in Eastern tradition and the influence of meditation techniques in the church through time. This includes, in our age, the related method of centering prayer taught by Benedictine John Main, and others. He traces how Carmelite, Ignatian and other Western prayer traditions focus on the same relationship to Jesus in prayer. The prayer in one of its forms is in the Kyrie of the Mass, while being present in the entire action of the Eucharist.

Perhaps the best place to start reading is the Appendix, a set of suggestions or guidelines for the regular practice of the Jesus Prayer. These appear to have come directly from John Gill’s own personal prayer life, giving insight coincidentally into the nature of the person whose words we are reading. A valuable, sensible and sensitive set of measures, they reveal both who it is who is writing to us, and why he would have been inspired to write such an informative and well-researched work of spirituality.

Posted by The Carmelite Library at 03:03 No comments:

Posted by The Carmelite Library at 21:41 No comments: 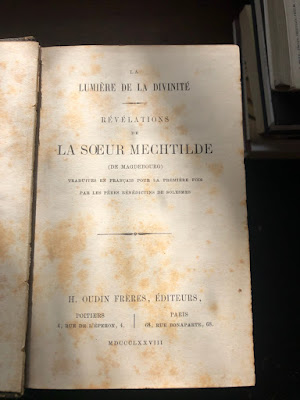 Translation of ‘Das fliessende Licht der Gottheit’, in English ‘The Flowing Light of the Godhead’, but here in French ‘La Lumière de la Divinité’ by the thirteenth century Beguine mystic Mechtild of Magdeburg. (Poitiers, 1878) Notes: Mechtild wrote in a local Magdeburg mixture of Middle High and Middle Low German. Her original writings do not survive but we have two copies, one in Latin the other in another variant of German, which became the focus of rapt attention when she was rediscovered in the nineteenth century. The monks of Solesmes produced a two-volume edition in the 1870s while, it seems, simultaneously putting it into accessible French. As the title page states: “Traduites en français pour la première fois.” There is wide interest today in Mechtild and other of the so-called Rhineland mystics, both by scholars and general readers, and presumably translations flourish in French now just as they do in English. The Bibliothèque nationale de France record provided lots of useful information, after download records proved elusive.

Posted by The Carmelite Library at 22:04 No comments: