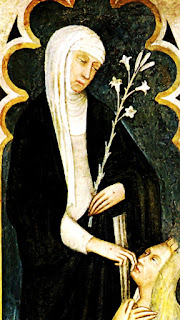 On Tuesday the 18th of April Ann Rochford gave an introductory paper on Saint Catherine of Siena, as part of the Carmelite Library’s regular Spiritual Reading Group.

Catherine of Siena was the great Dominican woman of the fourteenth century.   She is a one of the great Mystics and a noted ascetic.  Pope Paul VI commented, “Her gift of wisdom enabled her to taste the truth” She was uneducated: she did not learn to read until her late teens and she only learnt to write her own correspondence in her later twenties.  Yet, she is noted as a great theologian, in fact a Doctor of the Church, (a person whose teachings are true and timeless). She has left us with a collection of almost 400 letters; twenty-seven prayers and her very great work “The Dialogue.”  (Three different literary genres) She carried on lengthy correspondences with popes, kings and princes.  She is credited as being a driving force in bringing the Papacy back to Rome, from Avignon.  She was a peacemaker and spiritual advisor.  She had a legion of followers in her lifetime.  All this, and she was dead at thirty-three.
_____________________________________________________________________________
Catherine was born on the 25th of March 1347.  She was the 24th of 25 children.  (Family of multiple births, with a twin sister. Maybe half the children died in infancy) Her father was Giacomo de Benincasa, her mother Lapa Piagenta.  Lapa was forty when Catherine was born and lived to be 89.  She walked in the procession, which brought Catherine’s relics back to Siena. Siena itself was a town of cloth dyers. It was prosperous and Catherine’s family was not poor; her parents desired to marry their children, particularly their daughters, “up”.

In her mid teens she was accepted into the Mantellate, a third order of lay Dominicans.  These were women, usually widows, who took the Dominican vows, wore the habit, kept the Dominican rules of silence and prayer times: but they lived in their own homes.  This suited Catherine well, because she could chart the course of her own spirituality, but was not such a happy arrangement for the rest of her family.  They would often come home and find that she had given away the food for the night, or they would see their winter cloak around the shoulders of the beggar down the street. In her first few years in the Mantellate she led a life of solitude, although she was taught by older members of the order, how to read. Her life of deep mysticism began to flourish.  She talks of having many visions whilst in mystical trances and being visited, not just by Jesus Himself but also by many saints, including Dominic, Thomas Aquinas, and Mary Magdalene.

At around 20, after a vision, Catherine saw that God was calling her to leave her enclosed life and work in the World.  In the vision God told her he wanted her to fly on two wings, one wing was her personal spirituality, the other service to others.   She began visiting the sick in their homes and feeding and caring for them in the local hospital Santa Maria Della Scala.  She asked to be given the worst cases, the plague and leprosy. She soon attracted a following of local young Sienans, and then people from further afield, who joined her in her work.  Such was the enthusiasm of her following that she eventually had to build a house of her own just outside Siena, to cater for her large following.  Her followers were men and women, clergy and laity, quite remarkable for a medieval laywoman.  She instructed them by sharing her own spiritual journey and acting as their spiritual director.  She referred to them as her Family and they often called her Mamma.  Her followers would not describe her as happy -- but always very joyful.  Her letters often express her love for them.
Amongst her followers were: her mother, her sister-in-law, a Franciscan provincial, Augustinians, William Flete a Cambridge graduate and English Augustinian, who came to Italy to meet her and remained a close friend, young Dominican novices, young lay people from rich and poor families. There were also three young laymen, who acted as secretaries and wrote all of her correspondence.
____________________________________________________________________________
As her fame became better known, Catherine became famous as a peacemaker.  She was called upon to settle disputes in families, and then disputes between the fractious Italian states.  In these matters she wrote to, and instructed, the King of France, the Queen of Hungary, dukes, counts and other notables across Europe. Catherine’s letters are straight forward and a delight to read.  Her strong personality and sense of what is right in God’s eyes, shines through them.  She thinks nothing of the fact that a young woman of humble birth is giving very direct instructions to the great people of her time.  She is doing God’s business.

Catherine’s great work is The Dialogue. It was written in the last few years of her life.  Her scribes, who took turns to sit with her, wrote down the document and recorded what she was saying, during her mystical trances. At the beginning of The Dialogue she tells us she wants to pursue truth and clothe herself in it:  the truth of herself: the truth of God. To speak the Truth is the Dominican charism.  Catherine was a very fervent Dominican.  Truth and Love are the two virtues that shine through her work.

The work is a dialogue between herself and God (really between humanity and God) and obviously comes from her times of mystical experiences.  She has four petitions she wishes to put to God, and she gives us her record of the discussion involved in each of the questions. Her petitions were about Herself, the Church, the whole world, and for assurance of God’s providence in all things, particularly in regard to a certain case of which she was aware. In the discussion she refers to herself in the third person, often as “the soul”.  God is usually called “first truth”.

Mystics, like poets, need symbol and image to express their thoughts.  The Dialogue is therefore not an easy read, but if you have the time, it is worth some effort.

Catherine died in Rome in 1380, aged 33.  In her last years her body was ravaged by her inability to eat and mortifications she imposed on her body.  These no doubt hastened her death.

Posted by The Carmelite Library at 23:31 No comments: