Posted by The Carmelite Library at 14:35 No comments:

Biography, selective by nature, may reveal as much about the biographer as its subject. The twenty lives attended to in ‘Luminaries’ (SPCK, 2019) are written by Rowan Williams to “illuminate the Christian way.” They also sparkle with his original insights and present preoccupations. “We can’t plan to be difficult and unique saints,’ he says of Florence Nightingale, “We manage normally to be rather average sinners.” Or of the modern Carmelite saint and philosopher, Edith Stein: “Go far enough with the disciplines of this world in honesty and integrity, and God is waiting for you.” His account of Meister Eckhart’s sermon style could be self-descriptive: “An unusual mixture – both very colloquial and relaxed and extremely intricate and technical.” These brief lives are models of concise meaning.

“As love is union, it knows no extremes of distance.” A favourite poetry discovery this year is the Mexican Phoenix, Sor Juana Inés de la Cruz. Like other 17th century poets, say John Donne, she moves confidently between sacred and profane. Such was her love of learning from an early age, Sor Juana finally went to one of the few places where this passion could be met for a woman of her time: she entered the convent. “I don’t study to know more, but to ignore less.” The church was uncomfortable with this feminist and controversialist, even conducting an inquisition. She acquitted herself, according to one observer, as “a royal galleon might fend off the attacks of a few kayaks.” Edith Grossman’s translations (Norton, 2014) deliver lively poetic access to her varied thought. Once met, hard to forget.

Posted by The Carmelite Library at 14:17 No comments:

On Wednesday the 6th of November, Bernadette Micallef conducted a Carmelite Conversation in the Library on Saint Raphael Kalinowski OCD (1835-1907). Here is Bernadette’s introductory paper to the Conversation. 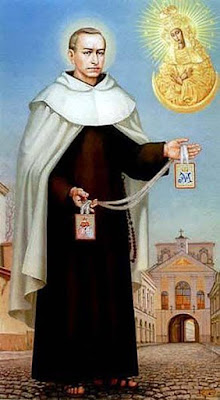 Disclaimer: I’ve done my best to be accurate in the story presented here but found it difficult to reconcile varying accounts and certain discrepancies in the time line in different references. I still have questions myself about the sequence of events, particular around his ‘conversion’. I’d encourage you to do your own reading and delve deeper into the mysteries of his life that can lead us to God.
Bernadette Micallef
Carmelite Conversation
Wednesday 6th November 2019
The Carmelite Centre Melbourne.
Posted by The Carmelite Library at 21:00 No comments: