A Visit to The Biblioteca Carmelitana in Rome PAUL CHANDLER

A visit in April 2004 to the Institutum Carmelitanum in Rome by the librarian of the Carmelite Library (Paul Chandler O.Carm.) in Middle Park brought an unexpected windfall of rare books to the library. 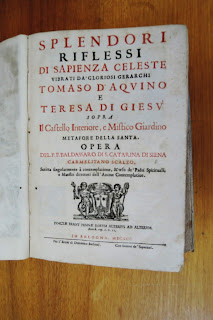 The Carmelite Order began at the end of the 12th century in Crusader Palestine, and later became one of the four principal mendicant orders of the Middle Ages. The first surviving Carmelite literature dates from the 1270s. Although the order was never as large or intellectually significant as the Dominicans or Franciscans, there is nevertheless a large literary production from across these seven centuries: largely biblical, theological and philosophical before the 16th century, and predominantly spiritual and mystical thereafter, but ranging across almost every field from astronomy and belles lettres to canon law and psychology, even to a 1998 translation of Aristotle’s Ethics into Welsh.

Every monastery had a library, large or small, and the principal studia in the university cities usually had quite large collections. There were, of course, various destructions and depredations, but the systematic suppressions of the 19th century were the most severe blow to the Order’s libraries, with many of the most important dispersed. The Carmelites reached a low intellectual ebb in the 19th century (an old barb counted a learned Carmelite among the seven wonders of the ecclesiastical world, along with a simple Jesuit, a poor Franciscan, a humble Dominican, and a few others). The Order’s failure to re-establish an international graduate faculty in Rome or elsewhere also slowed attempts to reconstitute library collections that would represent the Order’s rich bibliographical heritage.

Although many smaller libraries remained intact, a definitive revival really came only with the establishment of the Institutum Carmelitanum in Rome in 1950. Its tasks included historical research and publication, an annual bibliography (Bibliographia Carmelitana Annualis, 1953-  ), and administration of the Biblioteca Carmelitana, which incorporated what remained of the Order’s principal Roman libraries. Today consisting of about 25,000 volumes by or about Carmelites, the BC is the most comprehensive such collection in the world. Other significant Carmelitana collections include, more or less in order of importance, the Carmelitana Collection in Washington, DC, with 14,000 volumes, the Teresianum in Rome, and the Nederlands Carmelitaans Instituut in Boxmeer. In a field where there is little competition, our small Carmelitana collection at Middle Park, with about 5,000 volumes, is not insignificant.

I spent some time in Rome in the early ’80s doing graduate work in theology, Latin, and paleography. The Biblioteca Carmelitana had a doubles room, where duplicate books from the library were kept. Legend had it that Fr Kilian Lynch, a Irishman of aristocratic bearing who was the last of the old-style priors general, had been horrified to discover the neglected state of various Carmelite libraries in Italy in the impoverished years just after the war. Supposedly, in one house he had found the exceedingly rare Speculum Carmelitanum of 1507 in a stack of books being used page by page as toilet paper. The story goes that he summoned Fr Pio Serracino-Inglott, then librarian, from Rome to the offending Sicilian convent and instructed him to remove all books of value on his authority. Other monasteries neglectful of their cultural goods were similarly stripped of them, and the library in Rome began to collect numerous duplicates of even the most valuable books. A collection of them was finely bound, furnished with bookplates bearing the prior general’s arms, and presented to the refounded 13th-century house at Aylesford in England, which had been suppressed in 1538 and regained in 1949. Others went to help establish the very fine collection in Washington, DC. By the ‘80s, however. the doubles room was no-go territory. Despite much trying, I never managed to get in.

It was a bit of a thrill, then, to be given the key and invited to ransack in April 2004, a process which took two days, and a third for packing up eighteen large boxes of books. Nearly all were hard-to-find titles which have considerably strengthened the obscurer corners of our collection. 120 were pre-1800 titles, which have been added to our Rare Book collection, which now includes about 500 per-1800 volumes, mostly Carmelitana. ANZTLA members might be interested to know of some of them.