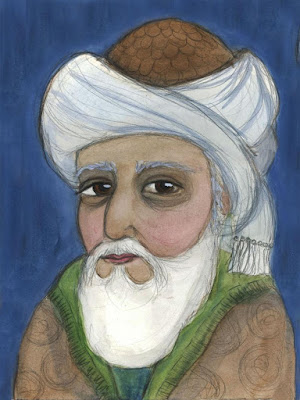 An original hand drawn and painted illustration of Rumi
created by Debra Styer with watercolor and gouache.

On Tuesday the 19th of November Ann Rochford conducted a Spiritual Reading Group in the Carmelite Library on the Sufi mystic and poet Rumi. Here is Ann’s introductory paper to that session.

Rumi is not an obscure topic.  He is a great thirteenth century mystic, and is universally known across all major religions.  Much has been written about him and I will only reach the tip of the iceberg in the one and a half hours we have today.  I want to start from a personal contemporary position.

I first learnt about Rumi in any depth in 2000, when I went to offer my services to the Kilbride Centre.  Rumi was having a very serious revival at the time and we seemed to be running endless seminars about his work.

In 2012, my husband and I did a tour of Turkey (highly recommended).  As we were travelling towards Cappadocia our tour guide started talking to us about Mevlana.  Mevlana was very well loved in Turkey and perhaps we would like to go to a ceremony still carried out by his followers. We had never heard of Mevlana.

The guide kept mentioning the possibility of attending this ceremony and eventually said Whirling Dervishes.  Then the penny dropped and I said do you mean Rumi?  Rumi has many names; in Turkey he is known commonly as Mevlana, which means master. In the West we call him Rumi, which refers to the sultanate of Rum, which was the ruling entity in that part of Turkey at the time Rumi lived there. (Rum is Roman)

Some of us did go to the ceremony.  Strict rules applied to the attendees.  No talking, no clapping and of course no cameras.  It started with a long musical introduction, then the master came out, and finally the dervishes arrived one by one.  The purpose of the master is to stop the dervishes whirling off the track.  They began to whirl, always left to right, and moved into their meditative trance.  It was quite mesmerising and went on for over an hour.  The music eventually changed and brought them out of their trance and that was it.  Some of the Dervishes then came back and did a few whirls so that the camera-deprived could get one shot for their memory bank.

It was Sunday when we visited the Rumi Museum in Konya.  It was for many centuries a Madrassa.  Islamic leaders had offered it to Rumi’s father, Baha ad Din Waled who was also a famous teacher, and called the Sultan of Scholars.  Rumi inherited it from him, and then his son after Rumi’s death in 1273.

When Ataturk came to power in Turkey after the First World War, the Madrassas were closed down. Dervish ceremonies were prohibited.  Eventually, in the 1950’s, a whirling ceremony was allowed to be performed, at Konya, once a year.   As Rumi is so significant in Turkish Islamic spirituality, this Madrassa became his museum and a place of pilgrimage.  Adherents of every religion visit it.  The mosque contains his mausoleum along with those of his father and other leading scholars.  There is a display of the dervish ceremony and a few artefacts that actually belonged to Rumi. As he was an ascetic, his possessions were not plentiful.  Today Ataturk’s laws have been watered down and Dervish ceremonies are more easily celebrated……….although not popular with right wing elements in Islam.

The most amazing thing to me was the mix of people who were there that day.  It was very crowded.  There were tourists like myself, nuns in the garbs of many congregations, ordinary Turks, some of the women in hijabs, a few Buddhists, and quite a few Saudis, with women in their black burkas.  An amazing mix of people, all here because of their common interest in this man, who lived and died in the thirteenth century.

Time to find out a bit more about him.

Mevlana Jalauddin Rumi to note some of his names was born in Balkh, which was then in Persia and is now part of Afghanistan, on the 30th of September 1207. He died in his long time home of Konya, in Turkey in December 1273. Rumi is known as a Persian poet, a Jurist, Islamic scholar, theologian and great Sufi Mystic.

He is the founder of a form of the ascetic dervish movement in Sufism. (There are a number of different forms of Dervish Sufism)  Rumi is the founder of the group of Dervishes famous for their whirling trances. It is properly known as The Order of Mevlevi.  Their prayer services are called Sama.  They consist of music, which creates a rhythm, a master to keep dervishes centred and a number of whirling devotees (always to the left) who enter into deep trances, which can go on for hours. Rumi started this form of mystic devotion by circling around a pole in order to clear his mind and connect with the spiritual.

Rumi believed in the use of music, poetry and dance as a path for reaching God.  He said that music focuses the whole being on the Divine.  In the whirling dance the practitioner turns towards the truth, grows through love, abandons the ego and arrives at the perfect.

Rumi came from a family tradition of liberal Islamic preachers of the Hanafi rite. They were Sunni Muslims.  It was an automatic assumption that Rumi, this only son to survive childhood, would follow in the family vocation. By 1220 the family had fled their home in Balkh due to the Mongol invasions.  They wandered across the region for a number of years.  To Mecca, Baghdad, Damascus, and Karaman where they lived for seven years, before settling in Konya in 1228, after an invitation to his father to set up a Madrassa.

Prior to arriving in Konya, at the age of 18, Rumi met the Sufi, Attar, in the Iranian city of Nishapur.  Attar was a very renowned Sufi who was generally held in awe in the Islamic world. Rumi was greatly attracted to Attar and became a constant follower.  He was searching for deeper religious understanding and had investigated a number of other belief systems, including Christianity.  Attar recognised Rumi as potentially a great leader.  When he saw Rumi walking behind his father, Attar described the father as The Sea---- followed by the Ocean.  Further encounters with Sufi’s in Bagdad ensured that by the time he reached Konya, Rumi was a committed Sufi.

Konya had been a Roman settlement. (Rum) At that time it was a thriving, cosmopolitan city with Jews, Christians and Muslims living in harmony.  It proved a fine place for a young Sufi to create a following.  When his father died, Rumi succeeded him at the Madrassa.  He was just 25.

Rumi is sometimes acclaimed as the Shakespeare of Mysticism.  His poetry and mystical insights were respected and loved across religious traditions in his lifetime, as they still are today, eight centuries after his death.

He has left us his seminal work the Mathnavi, considered one of the greatest poems in the Persian language.  This is a poem of six volumes, which took the last 12 years of his life.  It contains 27000 lines each consisting of a couplet with an internal rhyme.  It covers many topics, including right living, wisdom, justice the wonder of the natural world and love. Images of the natural world and love in its various forms are major themes which he comes back to constantly.

We have the works of Shams-e Tabrizi, Rumi’s teacher, which contain 35000 Persian couplets and 2000 Quatrains. It is written mostly in Persian but also in Turkish, Greek and Arabic. We also have seventy-one lectures and talks, sermons, and letters, which were written to friends and family.   A huge legacy, which is requires great skills in translation from its ancient languages to modern idioms. Rumi’s renown is such, that a number of modern scholars have devoted their lives to translating his works, e.g. the translator Coleman Barks.

An important part of Rumi’s spiritual formation was his friendship with Shams-e  Tabrizi.  They met in 1244, when Shams went to Konya and sought him out. They were spiritual soul mates who engaged is mystical conversations which enriched each other’s deepest understandings.  Shams was with Rumi for five years and then went away never to return.  What happened to him is not known, but Rumi grieved his parting for the rest of his life.  Shams is often mentioned in his poetry and there are many verses devoted to him

Rumi married twice.  He had two sons with his first wife and after her death, a son and a daughter with his second wife.

When he died in December 1273 the Christians and Jews of Konya joined his funeral procession a tribute of his great spirituality, which was above religious divisions.

Finally, because of my own interest, I have to point out that Rumi was a contemporary of both Saint Francis of Assisi and Meister Eckhart.  What was there about the 13th century that brought into the world such a wealth of mystical insight?

Posted by The Carmelite Library at 17:48 No comments: