Emily Dickinson -- There is no Frigate like a Book

There is poetry that renders absurd the wordy efforts of readers to explain and analyse its contents. In forty-one words, Emily Dickinson says things about books and reading to make interpretation of the poem look like a drag on the spirit. So allow me to indulge in a laborious labour of love by remarking on the words in her following rapid flow. We see the familiar features come into view, the capitalised words big with meaning and occasional dashes of punctuation that seem like chances to draw breath, and so we begin:

There is no Frigate like a Book
To take us Lands away
Nor any Coursers like a Page
Of prancing Poetry -
This Traverse may the poorest take
Without oppress of Toll -
How frugal is the Chariot
That bears a Human soul.
The concept of the book as something that takes us places without moving an inch would have been well-known in Emily Dickinson’s time. The concept of that something being a frigate is well-nigh unique to Emily Dickinson. A frigate was a swift water vessel, a boat designed to move quickly and effectively to its destination, which is Dickinson’s thought: the book takes us places in what is an instant. Likewise, a courser is not your average horse but a fleet stallion, a horse for racing and chasing, the strongest and fastest kind of horse for battle. So to say a book is even better than a frigate and a page of poetry better than a courser is to give high praise indeed, if agility and speed are highest values.
Now if that wasn’t enough, the second half of the poem shifts gear up. Reading books and poetry is something anyone can do, including “the poorest” who cannot afford a frigate and would not be able to own a courser. They may be able to travel without any fear of costs when they read. She then introduces a third rapid transit vehicle, the chariot, which is an even more archaic and poetic mode of transport than a frigate or a courser. Furthermore, we are presented with the ironical idea that such an expensive ancient imperial car could be “frugal”. Frugal because books and poetry cost next to nothing and yet may take us where we want to go. And when we reflect on the three modes of transport, we see that they would have been, even in Dickinson’s time, book words, words more likely to be encountered in her library than heard on the streets of Amherst, Massachusetts. Yet the immediacy of the language and thought scarcely gives us time to judge the words as anachronistic. We accept their veracity in real time. We are transported into her world of thought.
The shift in the second half of the poem is not just about the practice of reading, either. Ultimate questions of meaning are subtly introduced into the context. The “Traverse”, a reference to travel and a pun on poetry itself, also holds the deeper meaning of life’s passage, our time alive in this world. That we may make the Traverse without cost, or judgement, would seem an impossibility, and yet it is in our reading that all of this can be done. Dickinson would have us believe that a book is a very cheap way of getting us where we might like to be. A book may even contain the human soul. The human soul? At the end of the poem we are brought up short. What precisely does she mean, it may bear a human soul? We seem a long way from the positive noises about reading made in the opening lines. For while we may read the second half of the poem as being an extension of the list of qualities of a book, the grammar suggests that the subject of the second half is “This Traverse” and not books as such, at all. While the chariot may be a book, it may also be read as the human body. Read in this way, we suddenly see that she could be talking (and who knows whether ironic or not) of the Bible, or perhaps of the book as the means to wisdom. The poem argues for a poverty of spirit familiar to readers of Scripture.
We are not surprised to know this poem was written by someone who did not leave her house. It is an apologia for staying put and reading, a justification for the book as of equal if not greater value than the lived experiences presented inside the book itself. For these reasons the poem must be read with a caution. The thrill of reading is lauded while the implication that that need be all there is to life, is also implicit in the poem’s worldview.

Posted by The Carmelite Library at 21:48 No comments:

A reading of 'In the Library' by Charles Simic

Philip Harvey
For the first time in many years the Library is having a light cull of books, completely unusable books, that is. The jargon word is taken from museum practice, a deaccession. This cull has been approved by Committee and prompted mainly by space considerations, not because of their replacement with e-versions, or any other IT-induced reduction of the standing collection. In fact, you couldn’t find e-versions of most of these culled books, or even want them if you did. The titles come elsewhere in better versions, better typefaces and better everything. They are superseded textbooks, theology manuals in Latin from the 1950s that only someone in Rome could read today, reference works that due to time and advances in knowledge contain dangerous and misleading information. There are ratty copies of existentialist novels and pamphlets on obscure byways of doctrinaire Catholicism that haven’t been looked at for fifty years. Some of them put me in mind of the book identified in this poem by the Serbian-American Charles Simic, ‘In the Library’ (dedicated to Octavio Paz) though the book in the poem would remain firmly on the shelf of the Carmelite Library.
I hear nothing, but she does.

Once we have forgiven Charles Simic for his stereotyping of librarians we consider some of the better implications of his poem. We have all come across books that we gaze at with puzzled wonder. What kind of book is this? Who would have read this book? Why was it written? Who would take the time to write it? The very existence of the book in hand tells us that a whole range of real people worked carefully to prepare the text, set the type, produce the item, distribute and promote it. A librarian with sensitivities will occasionally have pangs of guilt or second thoughts about culling such books. Their rarity stops us in our tracks, the purpose of their very existence is not to be denied. “A Dictionary of Angels” would stay where it was parked because angelology is a genuine if under-attended subject of theology. Books on angels have a permanent shelf life in this Library. To have records of named angels is essential in getting to know the minds of other generations, whatever our own definition of an angel. Scripture and Talmud would be missing something were angels to be deleted. Students of angels would probably take exception to the second verse of the poem, where Simic wishes to relegate angels to the past: this is not something that makes sense if they are part of the heavenly realm. He also indulges in comic or far-fetched descriptions of angels that bear really no resemblance to their appearances in Scripture and elsewhere in Judaic, Christian and Muslim tradition.  More riskily, in fact it’s heretical methinks, the poet seems to imply that angels only exist today in books. The rabbis would have had something to say about this strange idea, not to mention the shepherds watching over their flocks by night. As it is, we should leave encounters with angels to those who have something to say. The poem’s purpose, however, is not to deny angels, rather to get us to listen to the ‘whispering’ in the books, and even if we cannot hear anything, to pay attention to those who can hear the ‘whispering’. The materiality of the book itself may fall apart yet there are presences everywhere. Their own existence in time is telling us of other existences and other experiences than our own. We must cull with a discerning eye, but also with extra senses of the kind possessed by Miss Jones.

Posted by The Carmelite Library at 16:13 No comments:

The exhibition of works from the collection of the Calligraphy Society of Victoria was taken down after over a month in the Library. Here are two photographs of the exhibition taken by curator Sally Diserio. In the foreground of the first picture is our facsimile of the St John's Bible, open at the carpet page for the Wisdom of Solomon. 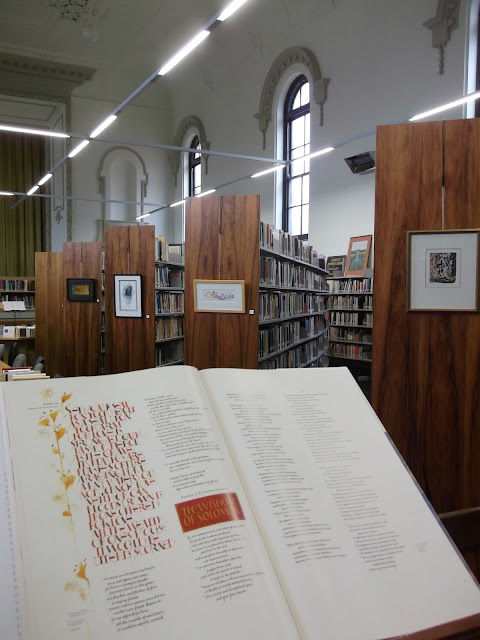 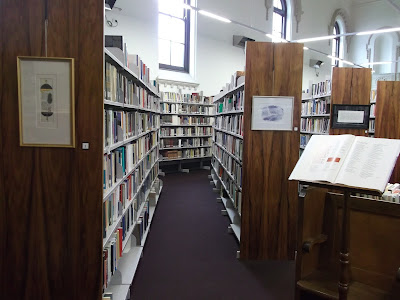 Posted by The Carmelite Library at 17:59 No comments:

News of the death of Seamus Heaney has gone worldwide in the time it takes to do a day’s work. Words and person come together in the minds of those who knew him, even if only from the page. It is safe to say that no other poet today could receive such universal acclamation or unite his readers in a shared loss. Even the minority criticisms of enemies hidden in newspaper blogs only add to the chorus of proof that someone great has passed on. Reports both in the media and from the funeral say his last words to his wife Marie were ‘Noli Timere’. ‘Do not be afraid’ could itself be heard as an undercurrent of reason in his poetry, but it’s early days to make too many generalisations. Interestingly, the media has not picked up on the source of the Latin ‘Do not be afraid’, which would be instantly identified by any Catholic churchgoer in Ireland before the Council. It’s Bible, in particular Jesus to his followers, but also the messenger to Joseph at the annunciation, and is traced back to Isaiah and other places in Hebrew Scripture. It’s Bible because it’s the Vulgate, used in the churches and schools of County Derry in Heaney’s childhood. And that is what he is saying as well to his wife Marie, it’s going way back, to their childhoods. It is a private language. Heaney is not being literary or clever by saying Latin, he’s saying something they would know really really well: Noli timere, Do not be afraid of anything. It’s an intimacy and a message of courage at the same time. It is very fine indeed, difficult to countenance once there in public view.

Posted by The Carmelite Library at 16:31 No comments: