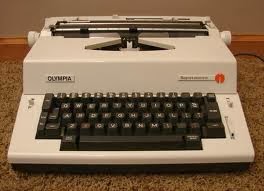 Quietly, with scarcely a string of words, the last typewriter manufactured in Britain left the production line at Brothers factory in North Wales in November 2012. Dutifully, duly, this instant relic was handed directly to a museum of technology.

Rumours persist online that someone, somewhere is still making typewriters, but increasing evidence from the same source suggests that if they are they do not have a big publicity profile. Searches for the machines in Melbourne kept coming up with the word eBay, a word that my spell checker only recognises when the second letter, not the first, is capitalised. Computers are now telling us how to behave, something we never expect of a typewriter.

The sense that something not too long ago happened to typewriters is felt when we notice that there are no new models in libraries and offices and homes. They are simply not being bought, and there is a reason for that. This week the Library sent a good-natured request to its own e-list:


Spine labels on books record the call number of the book, so the books are shelved in the correct order. The Carmelite Library prefers to use a typewriter for production of spine labels, and thereby hangs a tale. The Library typewriter is acting erratically. It is unreliable. The Library needs another typewriter for the typing of spine labels. Any typewriter that works. It doesn’t matter how old-fashioned, manual or electric, as long as it works. We are hoping someone on the list (or a local parishioner) may have a typewriter, in good working order,  that they can give to the Library on a permanent loan. Good working order also means its ribbons are still on the market.  Please talk to the librarian Philip Harvey at the Library, or by phone on 9682-8553

Responses were encouraging. One friend of the Library said he had a couple of manual typewriters, stored against the day when the whole computer universe suffered a collective meltdown. I advised him we wanted a typewriter because it’s faster and more practical than the computer for this particular job. Up until now, at least, that has been the case.  Others came to our aid with working typewriters, or mostly working except maybe for a few keys that need straightening, the caps lock is gone, or a roller needs constant adjustment. Minor mechanical problems go with the scene. Availability of ribbons hangs over us like a Damocles sword: we survive by a thread.

Perhaps typewriters are going the way of vinyl records. They have never gone away and remain in demand, even though the majority of people use another technology. For we must face the fact that we are in a transitional phase, where a major form of 20th-century communication has been swept aside quicker than we can say qwerty. This divide becomes most apparent in age groups.

People over fifty grew up with typewriters, tapped to their heart’s content or rampaged furiously over the keyboard in search of their lost Hemingway self. An office without a typewriter was almost a meaningless concept. Many of these 50+ people were easy converts to the computer, where errors can be corrected on sight, storage can be facilitated in what a writer friend of mine calls her ‘virtual box’, and any of dozens of fonts can be selected from a dropdown menu. My favourite is Garamond, though lately I have developed a fondness for Cambria. With a typewriter it is one size fits all.  Other 50+ people watch with fear and trembling the passing of the typewriter. They have a possessiveness about typewriters that rises above sentimentality. The pure logic of the Save Icon is a whole new science, there to take away their fixed and secure feelings about return levers and shift keys. Their Remington is a fortress of good practice. Their Olivetti is not just the acme of style, it serves a useful purpose.

People under thirty display a very different attitude to typewriters. Typewriters are, for them, a fascinating object of creative delight. –30 people grew up with the computer screen and its hundred attendant devices. None of that overload of effects applies here. The typewriter delivers the words immediately, creates a fresh page of new script on call, gets the job done in real time. I have witnessed teens and pre-teens rush on sight to a typewriter in order to muck around with it and see what marvellous creations they can extract from its readymade capability. You can take them anywhere, more so the typewriters that don’t need to be plugged in. In fact, typewriters are cool.

All of this explains why businesses in some parts of the world now specialise in typewriters. They are stocking up the machines and their replacement parts, in anticipation of an ongoing demand. This is potentially lucrative, especially as parts become more rare. It is possible to imagine typewriter clubs, in the same way as we have clubs for vintage and veteran cars. Indeed, typewriters are already classifiable themselves as vintage or veteran.  The fact that the Carmelite Library can ask brazenly for a free typewriter is itself telling. The motive and action are validated by the reality that typewriters everywhere sit around gathering dust. Few people use their typewriter, which is why they are quite happy to send it somewhere where it serves a useful purpose. I myself would have offered one of the three typewriters we have at home, except that one of them has some faulty key responses, the second is liable to breakdown without hospital care, and the third is a classic memory typewriter used by one member of the household for storing day thoughts. It’s a blog without the web.

Responses to the Library request keep arriving by email. Next week we will have to decide which one of these offers comes with ribbons that are still being made. It is a sign of the times that big stationery stores don’t sell typewriters anymore, but do sell the ribbons that go with them. Next week, it will be time to make some phone calls. 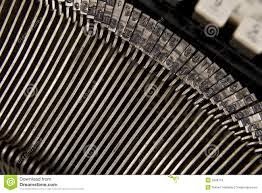 Posted by The Carmelite Library at 16:58 No comments: 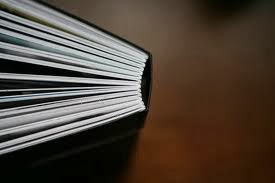 In Italo Calvino’s book If on a  Winter’s Night a Traveller, the insertion of incorrect signatures by a publisher into its brand new book is one of the many comic mishaps that propel the plot of his highly literary novel. Wordy word games and writerly jokes are common features at play in Calvino’s writings. He assumes his readers know the rules of the book game, where the wrong set of pages causes a red face for the author, egg on face for the publisher, and a range of emoticons on the faces of readers.

This week on Atlantis (e-list of the American Theological Library Association) the same mishap is reported in the book Gospel-Centered Hermeneutics  by Graeme Goldsworthy ( IVP Academic, 2006). That it took eight years for someone to notice might say something about the popularity of this book, and we wonder that the author’s friends didn’t say something before, but still Angela G. Morris at the E.M.White Library of Louisville Seminary in Kentucky writes: “Pages 65–96 of our copy is … 65-96 from a book entitled  Myths and mysteries of the Old West  and includes text about George Armstrong Custer, Sitting Bull and The Mountain Meadows Massacre.  All very interesting, but not on the topic of the main text of the book.”

The beauty of e-lists is that clarification comes quickly. Other librarians soon wrote in about their copies. It seems the original hardback of 2006 is okay. Some libraries ordered the paperback of 2010, which is the one with the wrong pages. IVP apparently is hard at work sending replacement copies on request. One hopes that any e-book version has been scanned or copied from the original in the computer. If not, there is also the added problem of correct identification of page numbering.

Those stuck with the only copy of such a book, unable to find a replacement, are faced with a quandary. To remove the book from the collection is to stop access to the genuine contents found in the other pages. To keep it on the shelf unremarked is to further the confusion. If you do not decide that the book is simply a dud, it is useful common practice to write on the flyleaf and/or title page of the book full details of the exact discrepancy. At least then everyone knows and the Library is free of blame. The other thing to do is advise the publisher, if the book is recent.

There is another side to this story as well. While some of us rush to read Gospel-Centered Hermeneutics  by Graeme Goldsworthy, others rush to collect the same book because it contains pages 65–96 of Myths and mysteries of the Old West. As one e-lister wryly noted, it sounds like a future collectible. Well, maybe, maybe not. But it reminds me of the incredible flurry that surrounded the release in Australia of one of J.K. Rowling’s Harry Potter books. Queues once formed along the streets, waiting for the bookshops to open selling first signed copies of new titles in the series. It was a reminder that this sort of readers’ clamour didn’t end with Charles Dickens. Unbeknownst to the sellers and buyers, page one of this particular installment of Harry Potter had a printer’s orphan. Because Australia is such an extraordinarily long way from England, even for jet aircraft, and because first release copies are released on the same day worldwide, and because Australia wakes up first to the morning sun, the publishers discovered too late that their initial print-run would have to be recalled and pulped. Only Australians got to snaffle the limited issue. Thus, by force of the market and the tyranny of distance, some very happy Melbourne buyers keep their rare Rowlings on the shelf, there to grow in value with time.

Posted by The Carmelite Library at 16:21 No comments: