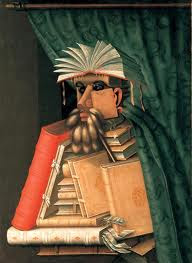 The Prague court of Rudolf II was one of the great centres of the later Renaissance. The emperor gathered about him alchemists and scientists, astrologers and astronomers, authors and artists of every kind. Creativity was the keynote, compatibility less so. One artist whom Rudolf inherited from his father’s reign, and who for this reason has strangely become synonymous with the history of Prague, was the Italian painter Giuseppe Arcimboldo (1526-1593).

Arcimboldo enjoys a unique place in Western art, with opinion divided about the exact value of his work. He took everyday objects and used them as montage portraits, so for example his four personifications of the seasons use stock from the green grocer to fashion human heads. He created portraits of Rudolf II himself in this fashion, leaving us to ponder whether we are staring at someone “younger than springtime”, the top banana, the apple of our eye, or an old fruit. The fascination with Arcimboldo’s paintings is not just that they are talking points, but that they challenge our own ideas about their exact purpose. One such painting utilises drapes, books and papers: ‘The Librarian’ (circa 1562).

Arcimboldo’s paintings seem to exist in the borderlands between symbolic archetypes and deliberate satire. From our distance it is hard to tell sometimes whether one of his masterpieces, the Emperor portrayed as the Roman god Vertumnus, is a marvel of imperial claims, or a sly dig at the pretensions of an indulgent humanist. His painting of a man with a face made of a fish and a pig is grotesque, surely, but viewers at the time knew instantly who the person was from the likeness and may have treated it as no more than a game of identification. Today we conjecture as to whether it is even the Swiss Reformer John Calvin. It’s guesswork. Not that Arcimboldo’s audience were naïve. The sixteenth century is rife with satirical portraits and maybe Arcimboldo has taken ideas from these send-ups of rulers and turned them into serious art works. They have become what we would call concept art.

‘The Librarian’ has literally been constructed from books. The resemblance to a human being provokes the riddle about what came first, the books or the person. It steps over the line of characterisation into that space where a person is defined by what they do. At this level we are trapped in the lazy thinking that wants to summarise someone up by a simple equation of a librarian as a mere organiser of books, or of books being the things that shape that person. It is objectification.

Lazy is a word that has come to mind for a reason. Scholars believe that this is not just a portrait of any librarian but of Wolfgang Lazius, which is the Latinized name of Wolfgang Laz (1514-1565), one of the Brains Trust of the Habsburg courts. Like others in this stellar world of multi-skilled polymaths, Lazius was an Austrian physician, cartographer, historian, and bookman. One commentator writes, “You will note that Arcimboldo has painted the librarian's paper ‘fingers’ clutching a stack of books acquisitively. Over 400 years later, Lazius still hasn't been able to shake the reputation that he obtained records by whatever means necessary ... including theft.” (Shelley Esaak) With such knowledge of motive and history we look at the painting in a new way.

Laura Thain on Thu further extends the background. “Scholars read The Librarian in two distinct ways. The contemporary reading (which much subsequent scholarship has acknowledged or substantiated) argues the portrait was a personal attack levied at one Wolfgang Lazius, HRE Ferdinand I’s court historian in the Habsburg court at Vienna, for his vain and inaccurate scholarship. Yet K. C. Elhard argues instead that Arcimboldo’s painting criticized not poor scholarship but poor bookmanship—that is, it levied a critique against ‘materialist book collectors more interested in acquiring books than reading them.’”

Like much else in Rudolfine Prague, this painting fell victim to the subsequent extremes of the Thirty Years’ War. Many of Arcimboldo’s paintings were lost or destroyed. This one was snaffled by the invading Swedish Army as part of the booty, which is why to this day it hangs not in the great gallery at Hradcany Castle in Prague but in Skoklosters Castle near Stockholm. Indeed, Arcimboldo’s works disappeared from the scene for centuries, whether due to changes in taste, or neglect, or the usual wasting of time itself.

Reception history does not clarify precisely when Arcimboldo was rediscovered in the 20th century, though commentators are firm in the view that Salvador Dali was inspired by him and that he came again to general attention in the 1930s. This puts at odds those art historians who, for example, like to say that Arcimboldo was 350 years ahead of Cubism. Planes and sections are a feature of ‘The Librarian’, but the painting is a world apart from Picasso, Gris, and Braque. Arcimboldo’s purposes are altogether different from those of Cubism, his draughtsmanship is precise and realistic, and his worldview is almost perverse in its Mannerism. One wonders (doubts is a better word) if a Cubist ever saw Arcimboldo before World War One or what he would have made of Arcimboldo’s wacky presentations. Their own obsessions with the picture plane owe most to the breakthroughs of their immediate predecessor, Paul Cezanne.

Nor can we say with any confidence that Arcimboldo was a Surrealist before the fact. The Milanese and the Hapsburgs of the 16th century went mad over him, but cool heads prevailed for 300 years and his star went cold. We can see why the Surrealists were attracted to Giuseppe Arcimboldo: his daring anthropomorphism, his morphing of the natural with the extreme and grotesque, his prodigious alchemy of the everyday and the dreamlike. Personally though, I find the connections between the Mannerist Arcimboldo and Surrealism more a matter of 20th century fellow feeling and inspiration, less so a matter of kindred intentions. The Italian is playing a game of witty artifice, not an intensive exploration of dreamscapes and alienation.

Any study of this artist has also to acknowledge the French literary theorist Roland Barthes. His book length essay on Arcimboldo addresses the “visual articulation of the intersection of man and nature”. As Thain on Thu says, “Barthes fixates on the way the artist employs rhetorical tropes into his painting—metonymy and paradox, for instance. For Barthes, Arcimboldo is a ‘rhetorician and magician’ because of the structural semiotics he represents in his paintings; each part of what we recognize as a face is a discrete element meaningless in isolate, but when assembled, the elements of his paintings produce meaning in a sum greater than their parts. While Barthes argues that these “puzzles” are a metaphor for language, they also strongly exhibit Arcimboldo’s debt to Florentine Neoplatonism in their commitment to displaying meaning only as a composite body.  When dissected, they cease to speak.” Perhaps the best way of abstracting her words is to say that Arcimboldo demonstrates, rather blatantly, Barthes’ view that meaning is a construct, and that our sense of what is being conveyed depends mainly on the components of the work, be they words, images, or some other medium. Certainly Arcimboldo appears at a time in Western art where game playing has become central rather than peripheral to the artistic act. He leads the way into the Baroque.

Meanwhile we enjoy ‘The Librarian’ from a different time and perspective altogether, as can be appreciated when we visit the gallery down the corridor here.

Barthes, Roland. Arcimboldo. Franco Maria Ricci, 1980.
Demetz, Peter. Prague in Gold and Black : the History of a City. Penguin, 1998.
Esaak, Shelley. In: About.com Art History, 2008, on an Arcimboldo Exhibition held in Paris and Vienna.
Graham-Dixon, Andrew. The Librarian by Giuseppe Arcimboldo, at http://www.andrewgrahamdixon.com/archive/readArticle/221
Thain on Thu, Laura. The Fate of Arcimboldo, the Fate of the Book, 2012, at http://viz.dwrl.utexas.edu/content/fate-arcimboldo-fate-book

Posted by The Carmelite Library at 04:01