The Scholar and the Cat


Each of us pursues his trade,
I and Pangur my comrade,
His whole fancy on the hunt,
And mine for learning ardent.

More than fame I love to be
Among my books and study,
Pangur does not grudge me it,
Content with his own merit.

When a heavenly time! we are
In our small room together
Each of us has his own sport
And asks no greater comfort.

While he sets his round sharp eye
On the wall of my study
I turn mine, though lost its edge,
On the great wall of knowledge.

Now a mouse drops in his net
After some mighty onset
While into my bag I cram
Some difficult darksome problem.

When a mouse comes to the kill
Pangur exalts, a marvel!
I have when some secret’s won
My hour of exultation.

Though we work for days and years
Neither the other hinders;
Each is competent and hence
Enjoys his skill in silence.

Master of the death of mice,
He keeps in daily practice,
I too, making dark things clear,
Am of my trade a master.

This version of the ninth century Irish poem about the cat Pangur Bán was made by the Irish novelist Frank O’Connor. His title for the poem is ‘The Scholar and the Cat’. It is a typical piece of O’Connor work: sharp, good-humoured, accomplished. We admire his character delineation. Every translator of Pangur Bán brings their own personality and interests to the poem and any reader of O’Connor knows about the “difficult darksome problems” in his fiction, relates to how O’Connor himself achieves in his writing the moment where “I have when some secret’s won, My hour of exultation.” English versions abound, they leap from the page: J. Marchand, Kuno Meyer, Robin Flower, W.H. Auden, Eavan Boland. Here is the Auden version:

Pangur, white Pangur, How happy we are
Alone together, scholar and cat
Each has his own work to do daily;
For you it is hunting, for me study.
Your shining eye watches the wall;
My feeble eye is fixed on a book.
You rejoice, when your claws entrap a mouse;
I rejoice when my mind fathoms a problem.
Pleased with his own art, neither hinders the other;
Thus we live ever without tedium and envy.

This version catches the eye for several reasons. It includes the actual meaning of the cat’s name, White Fuller, i.e the cat has a white woolly coat. Auden is the only translator I can find to use the word ‘book’ itself as the pronounced object of the poet-scholar’s study. In its brevity, Auden’s version attempts to summarise the reflective relationship in the final line as one “without tedium or envy”, an idea never stated explicitly anywhere in the original, but implied throughout. This is Auden’s own interpretation of the poem itself and is telling in terms of his ethical ideas about the creative act.

The ninth century did not have the ‘book’ in the way we know it since Gutenberg. So even though the poem revolves around the object of the scholar’s work, some translators fall short of calling it a book. Eavan Boland says that

Myself and Pangur, cat and sage
Go each about our business;
I harass my beloved page.
He his mouse.

While another contemporary Irish poet, Paul Muldoon, gets even more wily:

He and I are much the same
in that I’m gladly “lost to fame”
when on the Georgics, say, I’m bent
while he seems perfectly content

The role of the man, the monk it is assumed, is left quite open. While some translators assume he is a scholar, he could as well be a scribe, an illuminator, or simply a reader of the words in his cell. The original was written into the margins of a Primer, now held at Reichenau Abbey in southern Germany. Hence Muldoon’s reference to Virgil’s Georgics, which it is guessed may well be the work being read by the monk using his Primer. The poem may have been composed at the Abbey itself (we don’t know) and may be the work of Sedulius Scottus, the Pangur Bán poem resembling his the style. 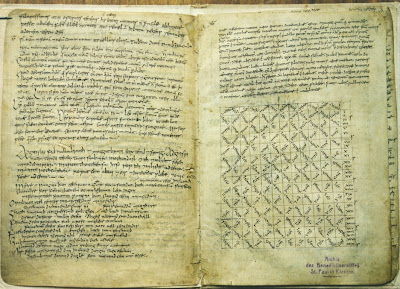 Sometimes I wonder what else Pangur Bán may be, the imagination itself, or the reader’s other half wishing to be elsewhere than on the page. The cat is one hemisphere of the brain, the monk the other. Ying and yang. The broody English poet Philip Larkin would have gibed in his Letters at such theories, saying the poem is just about a man and a cat, that’s that, and Larkin would be right, it is about that, as well.

I conclude by presenting a contemporary riff on Pangur Bán. The poet Victoria Beaumont felicitously describes the relationship between human and feline, the main effect of the poem, but notice that she has chosen, like other translators, not to be literal about what the poem means by the ‘book’.

Me and my cat Pangur work at home all day.
He keeps mum, I have too much to say.

I bask in the glow of my computer screen
While he romps about, indifferent as a teen.

Whether at this or the other end of April
It is cosy and timeless at our Windows sill.

He toys with the mouse, dreams of microsoft meals.
I’m the one left knowing just how things feel.

Though I can’t figure out how he gets where he climbs
My method employs post-modern paradigms.

He always manages to find what he finds
While I try to remember what’s on my mind.

Cool as, I bend paradoxes like a shot.
He curls up in shapes that celtic, not.

My thesis will soon be old hat as a tricorn,
While Pangur’s work is why he was born.


This is the tenth in a series of essays about the book in poetry, first released at this site.

Posted by The Carmelite Library at 15:48