The Gospels for Hearers

The Gospels for Hearers. Translated from the Koine Greek by Elizabeth B. Edwards. Dianggellia Press, 2013 ISBN 9780646555805 Order online at http://dianggellia.com/ 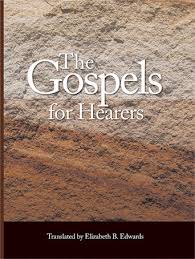 In churches everywhere the Gospels are read aloud and sung every day. Not just in church either, but at home, in classrooms, hotel rooms, and unlikely public places. These words - unfamiliar to some, familiar in part to most, overfamiliar to some of us – are at the heart of our language and culture, whether we think ourselves secular or not. But how do we hear them? And how are they meant to be read?

The translator of this new version of the Gospels, Elizabeth Edwards, knows they were written to be read aloud. Her translation is “writing for speaking”, though she is motivated too by a desire for freshness, passion, and transparency, as well as a belief in the adult intelligence of the listener. She is a kindred spirit with the translators of the King James Version, their intention being to make a version of Scripture that spoke directly to any listener, with a true sense of the force and immediacy of the original. Like them, Edwards brings a lifetime of faith and scholarship to bear on the text. Her respect for the sources is paramount, her drive to make the sentences have their own impact is creative and learned. Listening brings inspiration.

The results are impossible to quote at length here, suffice to say Edwards throughout knows how to balance meaning and modern usage without straining for effect or playing to the gallery: “It is more feasible for the sky and the earth to disappear, than for one comma of the Law to fall.” (Luke 16, 17)  She may prefer plain sense to traditional use: “Give back to Caesar what belongs to Caesar, and to God what belongs to God.” (Matthew 22, 21). She says of the Ten Virgins, “Five of them were silly and five were sensible.” (Matthew 25, 2). She shows how sometimes it really has to be spelt out: “He was in the world – the world which owed its very existence to him – and yet the world did not recognize him.” (John 1, 10)

Edwards’ husband, Bill Johnston, is a minister, poet and actor, a fortunate combination, for his skills in setting out the translation on the page for public reading are a secret of its success. Each phrase is given its own space, breath and pacing, consistent with contemporary English speech. Line layout catches the attention, builds momentum, or presses emphasis. Johnston delivers the craft of scripting while avoiding the pitfalls of theatricality.

The translator was also fortunate in having, like the Gospel writers themselves, a community of faith on which to try out her latest efforts. In this case it was the Montrose Uniting Church and blessed indeed were the members of that congregation to have heard for the first time renderings of the Koine Greek that get the urgency of the Gospel language in an idiom that is natural and vernacular.

Can anything good come out of Montrose? The Gospel itself, in a grammar and vocabulary, a form and presentation that speaks to us, anew. ‘The Gospels for Hearers’ is available for use in worship, theatre, school performance. But I find the text useful too for study of individual passages, due to the spacious page layout. Each verse is given its due, so I can consider the play and purpose of the words on their own. And perhaps most rewarding of all for the first-time reader of Edwards, there is the sheer shock of the new. Lovers of the Gospel enjoy being confronted and there is plenty here to make us think again about the beauties and paradoxes of the Greek, as well as the joy and wonder that Mark, Matthew, Luke and John (in that order in this version) were trying to tell their listeners, as though it were a matter of life and death.

Posted by The Carmelite Library at 21:55