‘The Edge of Words: God and the Habits of Language’ by Rowan Williams 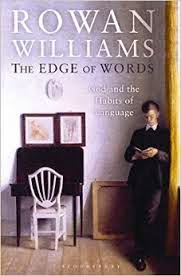 This review by Philip Harvey first appeared in The Melbourne Anglican, April 2015

Language is one of the attributes of being human. The spoken, heard and written word singles us out within creation. But how we use language, and what we mean by our words, varies extravagantly and is not uniform. While language’s purpose would seem to be to make common sense, our own ways of using it are subtle, complex and artful. Also, we are the inheritors of the Tower of Babel.

Undeterred, Rowan Williams has written this set of Gifford lectures to help identify the many different ways we use words, and in particular that most vital of words, that in English is ‘God’. He quotes Michael Leunig admiringly: “The word ‘God’ cannot be grasped scientifically, rationally, or even theologically without it exploding. It can only be held lightly and poetically.” Williams then asserts that his book is a “phenomenology of explosions.”

Everyone with a vocabulary has a word for God. In our society, whether we are orthodox believers, fundamentalist ideologues, atheist ranters, secular humanists, or just like going surfing, we know what we mean by God. Whether we mean the same thing is another matter, which may be one of the reasons for Williams’ deeper interest in language use at this stage in his intellectual career.

The Archbishop has steeped himself in philosophy of language and neuroscience, so that we have here a handbook of all the important contemporary theories. His intention though is to find how they help us with our God-talk, starting with the brilliant, back-to-front question ‘does the way we talk as human beings tell us anything about God?’

Rather than launching into yet another round of proofs for God, Williams is interested in how the challenge of speaking about God is the challenge of “referring appropriately to what is not an object among others or a definable substance that can be ‘isolated’ and examined.” There is a register to how we speak about God that is not routine in the way we speak about much else: it is disruptive, even eccentric. Speaking about God has this disruptive effect and in so doing challenges our understanding of finite being itself, i.e. the subject of all our discourse.

Can we say what we like? George Steiner speaks of the “protean stability” of our speech and Williams picks this up when talking about truth and falsehood, the fact that relatively little of what we say is descriptive, that we make things up, and even lie as means to an end. He puts forward the Augustinian reminder that it is only through grace that we recognise we are liars and can only cease to be so when we let go of the ‘ownership’ of our speech and “surrender to the language of confession, testimony to the beauty of God.”

We are used to metaphor, error, fiction, and untruth, and cannot imagine language free of these factors. By so doing we recognise that the world itself is not a fixed object but a series of invitations, that things are open to reworking and change. Whatever language we use it is time-related: “speech refuses to work with deadlines for final representation.” At every step Williams hints at the similarities between language and our ways of explaining God, at how the limits of our language search out for the “imagination of a universal consistency.”

Elsewhere he talks of Meister Eckhart’s paradox that God is both the end of all naming as well as being that which is incapable of being named.

Rowan Williams wryly describes the argument of one of his sources as “prohibitively difficult” and his own style here is at the heavy-duty end of his writing manner, but the book rewards those with application and a love of language and its propensities. It grows with re-reading. Each case for language is lucidly explained in its own terms, then examined in highly creative ways for how it forwards our quest for ultimate meaning. At every turn he offers new ways of thinking about God.

One achievement of the lectures is its proposals for new ways of doing natural theology. Yet I look forward to other literary manifestations of these ideas in his meditations and poetry. One of my favourite sections is called ‘Excessive Speech’. Ambiguity, absence and other kinds of awareness in the world require us to reach for paradox, poetry and parable, in other words to be innovative with language outside of what might be thought normal forms of communication and expression. The pressures placed on language by poetic rules (rhyme, assonance, stress &c.) force meanings into the open and cause us to see things in a new way. (Williams’ explanation of the classical Welsh cynghanedd form here is a treat for the buff.) Language, he is telling us, is not just a leisure activity or a way of cataloguing objects, but is something “shaped by the fact of the body’s participation in the ‘action’ of the world.” This links in usefully with the habits of liturgical language and our need to speak from an understood location in time and space.

The parables of Jesus show us that language about God can be “carefully calculated shocks”. Williams points out that they are intended to embarrass us, even confessing it is hard to know how to give a sermon based on the Unjust Judge. Parables confront us with ourselves, challenging us anew to learn how to continue on the way. They are not final definitions but means to knowing more about God wherever we find ourselves. He goes further and says that the life of Jesus is a parable, one that we play out in narrative form in ritual and the church’s year.

His concluding chapter looks at silence, whether as the frame around language, the meaning that exists between the words, the place we find ourselves in when faced with suffering or wonder. This book is filled with sensitive considerations of the many-sidedness of language, only a few of which are mentioned in this review, but some of the most exact expressions of spiritual depth are found in this chapter. When he says we reach for something beyond the “chatter and buzz of egotistical self-reflection” we sense he is talking not just about God the Unsayable in silence, but about our constant world of language in the here and now.

Posted by The Carmelite Library at 16:30