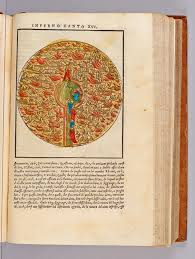 On Tuesday 4th of August three enthusiastic readers of Dante presented favourite translations as part of the third Carmelite Library Lecture for 2015. In conclusion, Robert Gribben, Will Johnston, and Philip Harvey ‘came clean’ with declarations of their likes and dislikes, their own thoughts on good translation of the Comedy and named some preferences. All three sets of closing remarks are published here on the Library blog. These are Robert’s closing words.

Now you hear from the junior member of this group of Dante lovers! My interest began when my professor in Cambridge in 1968 read to us part of a canto in both the original Italian and then in English. I suspect the English was Dorothy L. Sayers, but both language versions moved me. It led to my wife and I learning Italian for about seven years, until I could at least recognize the stems of verbs and nouns and begin to see the nuances of Dante's poetry. I love Sayers' theological essays, and all her detective novels several times, but I have not read all three volumes (Pelican, beginning in 1949) of Dorothy L's Commedia. However, in recent times I find myself coming back to her for accurate translation,  in which she retains the three-line terza rima, blithely rejecting the 'alleged impossibility' of finding enough rhymes in English (she rehearses her arguments in 10 of her 69-page introductory essay (to Hell).  Her account of the background to Dante and his world is remarkable for its detail, though no doubt now superseded by studies such as Prue Shaw's.

However, my favourite translation for getting the gist of a canto is Mark Musa's, boldly entitled The Portable Dante (Penguin 1995). His language is modern American (more East Coast universities than street slang).  His introduction runs to 43 pages, and is easier to absorb than Sayers'. His translation makes no attempt at the terza rima, but its triplets are 'rhymeless iambic pentameter', that is, blank verse. His footnotes throughout the Commedia are hugely helpful and not too numerous; but best of all are his short essays before each canto summarizing its contents and making the links across Dante's schema. And he is indeed portable.

Robert Durling's are not. Three enormous volumes (Oxford UP from 1995 to 2011)  amounting to some 21,000 pages, but you also get the original text, with an English translation on the facing page,  a commentary almost literally on every word, phrase and allusion, canto by canto, plus maps, charts and relevant contemporary texts from e.g. Virgil. His translation is literal prose, only arranged in triplets to match the Italian text.  It is very spare, very precise: its intention is to get the meaning. These are the volumes for those who want to penetrate to the bottom, particularly if you are interested in the mediaeval Italian.

I have only just met the very English Sissons and the Irish Carson, and I love Carson, though it's a pity he only translated the Inferno. He is a bit rollicking and backstreet Belfast.

Last, to our own, if such a serial expatriate can still claim to be Australian: Clive James. You will know Clive from his poetry, his essays and autobiographical books and from his television.  He was a generation behind me at Cambridge, and his autobiographical stuff amuses me in a nostalgic way. His recent reflections on his somewhat drawn-out dying I find fascinating, and impressive.  And I find him something of a mystery - I speak as a Christian - and not least when he translates, with such care and respect, reams of poetry whose underlying faith he must reject. I have noticed this most recently as I have worked through the Paradiso (with Musa in my hand).  Translating the Commedia has been a life's work, and it is dedicated to his wife, Prue Shaw, a very distinguished Dantean scholar.

His introduction is a mere 23 pages and worth reading for seeing into his mind. Does his didactic approach to the modern reader, of adding into the text explanations of mediaeval references, work? Well, they help, but they are not sufficient if you really want to know what Dante means. There are times when it's not translation, it's paraphrase, a problem some biblical translations share. He does thereby make the translation much longer than the original.

Clive rejects the claims of the terza rima. He chooses, as I said, the quatrain, or rather, rhyming couplets, which he churns out with ease, so naturally that as one of his friends said, they sound like Clive talking.  Certainly there are phrases and expressions which are pure Australian.  But one thing Clive James gets brilliantly. His page design shows no sign of couplets, quatrains or triplets: the verses follow each other down the page to the end, every 160 or so of them per canto. He captures one central aspect of Dante: the way in which a new idea burst forth from halfway through a line, so that almost breathlessly you are catapulted ahead. Clive has Dante's splendid pace right, and this makes the translation fairly whip along, a thrill to read out loud. That's why I chose the sudden arrival of the angel with the boatful of souls. It's why I found Inferno canto 1 so fresh (along with Carson). It applies throughout, including in the mutual admiration of Franciscans and Dominicans in the Paradiso, not necessarily the most arresting part of the plot. In the end, his version excites, amuses, challenges me, and for that I am very grateful.

And for us, moderns?
Depending on the admirer, [Dante] was the harbinger of modern poetry, the liberator of vernacular speech, the civic leader, the wanderer and refugee, the prophet of nationalism, the advocate of universal government, the exacting craftsman, the master of the poetic monologue - a man for all seasons. To those struggling to liberate 'Italy enslaved' [P 6], he was the founding father of his country - a mediaeval Garibaldi' [1].

Dante appeals at many levels, from his descriptions of the Italian landscape, to his vivid images.  Australians might like it because it is in the vernacular, because of its realism, and that is a virtue of James's translation. We might share a love of the human story written in mythical form - think Tolkien, J. K. Rowling, Ursula Le Guin, the endlessly re-cycled Arthurian legend, the detective novelists (from Dorothy L. Sayers to P. D. James), autobiographies (as self-revealing writing) and travel writing.

James's (estranged) wife, Prue Shaw, herself a distinguished scholar of Italian, suggests,
... in fact Dante's concerns in the poem are those of any thoughtful person in any age or place: what is it to be a human being? how do we judge human behaviour? what is important in a life or a death? Human behaviour, our own and other people's, is at the core of human experience in this world.
We engage with these questions through the stories Dante tells in the Commedia. There is his own story (how he came to be the person who writes the poem we are reading), and there are the stories of the people he meets on the journey. The stories of their lives are endlessly fascinating: the predicaments they found themselves in, how they came to make the choices they made, why they have ended up damned or saved.

Those stories involve human emotions we can all recognize and relate to: love, hate, anger, fear, joy, anxiety, bewilderment, despair. The poem invites us to think about these powerful feelings and their place in human life - to reflect on them not just in relation to our own experience but also to the wider scheme of things.
Clive James himself welcomes it as standing at the dawn of modern science: 'its essential moment is its final vision, when Dante, the traveller, at the apex of heaven, looks into the source of creation and sees the imprint of a human face'.  From an atheist, that is quite a statement.