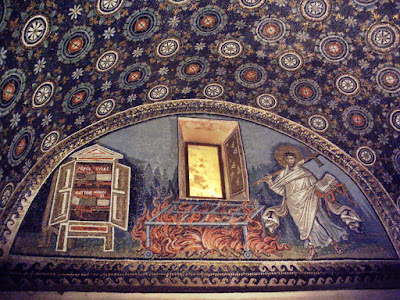 The Word before all worlds may still need to be compressed into documents. The documents become an icon of the Word they open to our eyes. In a cross-shaped building in an old garden in Ravenna is a mosaic of a box cabinet containing the four canonical Gospels. Their names are pieced together in Latin, language of the transient Empire. The books comprise a treasure house of Revelation to their readers, who stored their treasure where their hearts also could be found.

Apostles and evangelists shape up inside the small brick building. White stars in a blue vault glisten across the ceiling. The Gospel cabinet may have been of the kind where Scriptures were stored outside the time of worship, but liturgists disagree. History wishes to claim the little cross-shaped building, down the garden path of pruned pine trees outside the church in Ravenna, was a Mausoleum. Though historians tend to disagree.

The Mausoleum was probably an Oratory. Even this simple statement divides our reading of the building near San Vitale in Ravenna, named for the Empress Galla Placidia. The iconography of the mosaics is interpreted differently, depending on whether we choose to accept the place is a preaching house, or a burial chamber.

Most everything written about this place wavers with uncertainty. The remains of Galla Placidia may have been buried in one of the sarcophagi in this place, or in Rome. The records disagree. Birds drinking at water bowls, sheep on rocky hillsides appear in mosaic here to acknowledge the Word before all worlds. Cherubim and stars gaze upon the empty cross. It seems hard to believe the artists had other intentions.

But uncertainty is in the nature of the world. The Romans borrowed this awareness from the Greeks: the one thing we may be certain of is uncertainty. The lunette with the Gospel cabinet includes a flaming grill and the whirling image of a saint. It could be Saint Lawrence of Rome or Saint Vincent of Saragossa, iconographers disagree.

When we gaze at his powerful person we see he holds an open book, himself living proof of the truth in his grasp. Certainty, too, is represented squarely in the form of apostles and evangelists, the stars in a blue vault, and in the library of Gospels. They and their building look so modest against the enormous buildings nearby, the tempestuous peninsula of Italy, the raging excitement of an Empire in freefall. They, and their mosaic icon of the containers that reveal the Word before all worlds.
Posted by The Carmelite Library at 20:05