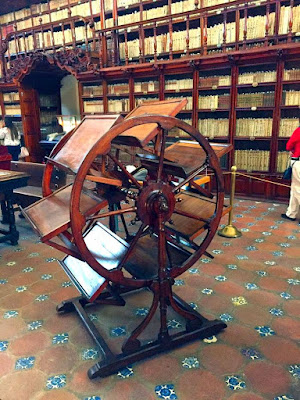 A book as long as your arm needs somewhere to rest. Opened by hand, the book becomes a table, imprinted with all known knowledge. Oceans may come up between us, while the leaves are close as touch. And another book, seemingly more wondrous than the first, purchased by subscription from a city of snowstorms and cobble streets and candlelight. And another, yet larger, as though we could sit all day and night at our table of pages, absorbed in their longer and longer contents, with no thought of going outside again.

Agostino Ramelli (1531-ca. 1610), inventor of overinscribing fountains and hurling engines, saw the need for the management of such armloads of books, that may only be shifted one at a time, due to weight. His own book of inventions has never gone out of print and may be viewed on the patient websites of august institutions. This next generation Leonardo who, like Leonardo, made his living as a military engineer, produced invention upon invention for the benefit of someone or other. The distance between practicality and impracticality, as witnessed in his bookwheel, is hard to measure with an instrument. For who knew if the bookwheel, which in one century went into overdrive, would not in another turn into a slowly turning shiny timber ferris-wheel, with its own label: Do Not Touch.

The trays rotate like seven continents on an axis, each one subservient to gravity. The floor wheels move in parallel the length of the library, reminiscent of the wheels of constellations in Renaissance star charts. Even now, in Ramelli’s time, when the world is conclusively round, and permanently so for the time being, the continents of trays offer up their bookladen meanings in a room of increasing cross-reference. The bookwheel acts, too, as a prototype photocopy feeder, landing pad for paper darts, and a ballroom for mice.

Mexico took delivery of a brand new bookwheel. The Americas absorbed machinery at a rate. The Bishop of Puebla, Juan de Palafox y Mendoza (1600-1659), established the first public library in the Americas (some say), the Biblioteca Palafoxiana. He was a lover of books and wished to circulate the joy. “He who succeeds without books,” said Palafox y Mendoza, “is in an inconsolable darkness, on a mountain without company, on a path without a crosier, in darkness without a guide.” No bishop would be without a crosier. Nor without a bookwheel to speed up the rate of learning. The bookwheel (pictured) increased the borderless conversation that books engender and inspire. In a minute you could read what each continent, even each island in the stream, said on the matter at hand. Big wheels and little wheels took their turn as discoveries clicked into place.

You wonder what theses were constructed by scholars, as they turned the pages of one after another of seven folio volumes lying open flat on the turning trays of the wooden wonder. The conversations that must have ensued. Their hands turned thick pages of confronting fonts. Their fingers scanned the rubrics and quills inked the margins where they freely roamed. You wonder which volumes went through the wheeling motions in that time before climate change and freeways and electric light.

The bookwheel is the equivalent of keeping seven windows open on your computer at the same time, though even more manoeuvrable as each book can contain thousands of pages. These windows are kept open with the aid of a scrollwheel, which is the spine bump in the back of your mouse. The scrollwheel is no longer than your fingernail. You dance with this mouse night and day. Even the folios known to Agostino Ramelli, or his imitator the Palafoxiana bookwheeler, are searchable in digital that takes only the whorls at the tip of the index finger to display. Ramelli’s profuse inventions image with resolution on a screen the width from thumb to elbow.

But two things made the bookwheel a museum piece: broad tables and a book as long as from your wrist to your fingertips. The handbook and all its practical kind dispensed with the need for machinery. And a table broad enough for seven books did away with cumbersome contraptions, the talking point of Renaissance scholars. The bookwheel is not currently available in most trade catalogues of library furniture. It has come to rest in its special place amidst other rarities rarely returned to.
Posted by The Carmelite Library at 19:40