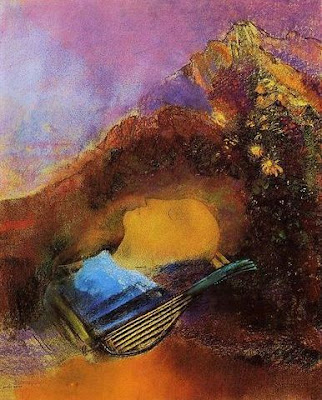 In Session Four (Friday 24th of May) of Ways of Seeing, the Carmelite Centre’s three-day spiritual workshop, Jina Mulligan spoke on the art of Odilon Redon as an aid to contemplation. Here is some information from Jina on the artist's series 'In The Dream'.

A series of ten lithographic works from 1879 on chine appliqué. (MoMMA.org)

If we ask ourselves whether the ten prints of the series are homogenous, whether
they represent, so to speak, the various aspects of a single vision, the answer
must be a clear no. (Klaus Berger, Odilon Redon, Fantasy and Colour, 1965)

The first of his lithographic album, In the Dream of 1879, was a declaration, one
that sustains the astonishing, strange character of the images, “The title came instantly and easily to me,” wrote Redon, “and described my
personal atmosphere in that environment, at that very moment. (I was reading
L’Assomoir, and the Impressionists with Degas had already cleared the way, after
Zola.”)

The names Egar Allan Poe and Goya, inscribed on the title pages of the
lithographic albums published in 1882 and 1885, also helped to define his
inclinations - “equivocal, permissible, very legitimate.”

Of greater significance, and even more profoundly revealing, are the titles he gave
to several of his lithographic suites, notably The Origins of 1883, The Night of
1886 and Dreams of 1891 - key words of his visionary universe where, in a
darkness lit only by flashes of light, monsters, recreated from the beginning or
end of the world, confront one another......

Thus, just as a seemingly united artistic movement - Impressionism - was
encouraging painters towards the conquest of visible reality in its most ephemeral
moments, Redon loudly proclaimed the existence and rights of an internal reality.
To give expression to this internal reality, the artist had to invent a new language,
capable not only of ‘depicting’, but also (and despite its flaws and tentative
nature) capable of evoking the ineffable.
(Roseline Bacou, Odilon Redon Pastels, 1987)
Posted by The Carmelite Library at 19:17