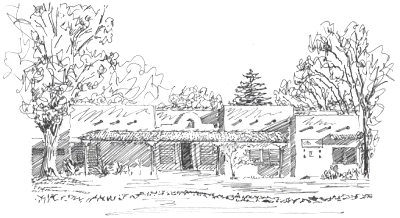 Drawing of the Center for Action and Contemplation in Albuquerque, New Mexico, taken from the Center’s website

On Wednesday the 18th of August Jenny Raper led the Spiritual Reading Group via Zoom in a session on Richard Rohr. Richard Rohr (born 1943) is an American Franciscan priest and friar, a teacher and writer. The presentation was an introduction to his daily meditations, which bring his emphasis on “orthopraxis” into our daily lives, in which “lifestyle and practice are much more important than mere verbal orthodoxy”. After Jenny’s introduction, copied below, the group discussed his three meditations on different kinds of power, released by email on the 8th, 9th and 11th of this month.

Richard Rohr writes that he had a happy childhood, attending his local Catholic church and parish school, being an altar boy, a server and a member of the choir.  This background provided him with a strong spiritual leaning and that he tells us he had a seminal spiritual experience as a very young child and another when he was a little older, when he was alone in the church.  Both these experiences were during the Christmas celebrations and, looking back, he thinks his wonder at the incarnation drew him to Franciscan theology.

He entered a Franciscan 'minor seminary’ at aged 14, entered the Franciscans as a friar in 1961 and was priested in 1970.  He believes in an 'alternative orthodoxy' (Franciscans use this phrase themselves) referring to their focus on 'Orthopraxis' – that the way one lives and practices their faith is more important than verbal orthodoxy.  Many of his writings reflect this belief and have drawn many sharp criticisms from various sources, both Catholic and Protestant – particularly Evangelical and Fundamentalist Christians.

When we consider the religious life and teachings of St Francis and St Clare, the emphasis on orthopraxis is clear to see.  In July 2020, Fr. Joseph Elder OFM posted on the internet that Franciscan theology was influenced by the Eastern Greek Fathers – importantly viewing ‘the Incarnation as too momentous an event to be initiated by sin.  Rather the emphasis ought to be on the goodness and glory of God reflected through his creation” – (John Duns Scotus).  Fr Elder writes that Franciscan teaching 'moves sin out of the forefront and places Christ at the centre of God's creation, revealing a God who is passionately in love with humanity”.  It was during his novitiate year that Richard realised he was experiencing grace and absolute acceptance without requiring him to obey laws or be worthy.

So, from early on in his religious life, Richard's foundation was that God's love encompasses everything and that we are justified by this.  He studied the theological writing of John Duns Scotus (circa 1266-1308), a Franciscan, for four years for his Masters Degree and writes that ‘Duns Scotus gave me foundational permission to broaden out, because he said that what good theology does is maintain two freedoms: It keeps people free for God and it keeps God free for people … what religion tends to do is tell God whom God can love and who God is not allowed to love.’  Also, during these years he writes that he was taught by young enthusiastic priests (‘the best and brightest’) who had been sent as observers to Vatican II.

He also learnt that ‘Franciscans never believed that 'blood atonement' was required to God to love us.’ The enfleshment of God had to proceed from God's perfect love and God's absolute freedom rather than any mistake of ours.  A Franciscan saying is ‘Jesus did not come to change the mind of God about humanity; Jesus came to change the mind of humanity about God.”  Richard says this creates a very coherent and utterly positive spirituality which draws people towards lives of inner depth, prayer, reconciliation, healing and even ‘at-one-ment, instead of mere sacrificial atonement.”

As a young priest Richard Rohr writes that the writings both of Pierre Teilhard de Chardin and Thomas Merton had an enormous influence on his theology and through them he was encouraged to read widely in the other great faiths of the world.  He has expressed great admiration for other faith leaders and often quotes the Dalai Lama, for example.

These spiritual beliefs have been the catalyst for Richard's life as a priest and friar.  His first short experience was as a Deacon in Albuquerque in New Mexico in 1969 where he fell in love with the land and this is where he later created his Centre for Action and Contemplation in 1986.

His first posting as a priest was as a teacher in a Cincinnati Boys High School, where he was assigned to lead the youth retreat for the Archdiocese.  After a nervous start, he connected with the boys and they started bringing along girls too.  This led to the New Jerusalem Community which met on Friday nights.  It became so popular that it was suggested he tape his sermons and sell them as the Great Themes of Scripture; they sold all over the world.  He became a political activist during the 1980s and although he believed teaching was his vocation, he began to think he needed to work with adults, like the ones he met during the protests – people who were angry, confused and empty. Although he was now famous in America and beyond for his tapes, and in demand as a public speaker, he felt empty and depressed.  And, importantly he wrote that he felt ‘the Church made no sense.’  Later he identified this as the process we all go through as we enter ‘the second half of life’.

He tells how, in 1986, he packed up his little truck and drove to Albuquerque seeking a way to practise his beliefs.  He had just arrived when a nun asked him to take on the role of prison chaplain!   He was not keen, but had no other guide as to how he would live and teach now.  Through this work he felt guided to stay and develop the Centre for Action and Contemplation.

“The name was chosen because it expressed the paradoxical nature of the Centre's purpose: standing in a middle place, at the centre of the Cross , where opposites are held together.”

Although the Centre was founded based on Orthopraxis, the emphasis rapidly became that of Contemplation.  The Centre discovered that people all over the world were hungry for teachings and experience in this.  Richard continued to write on theology and practice – to take to people ‘the categories of liberal and conservative … helping people to live at peace with people who are different.’

In 2014 the Centre started making his Daily Meditations available by email to people, at no cost, all over the world. He writes that many, many experts and generous donors made this possible and many hearts and minds put the mediations together.  The meditations grow from his books and teachings – such as his first year in 2014, which was taken from writings on The True Self.  He happily acknowledges influences on the mediations from ‘many teachers – from past and present – (who) have shaped my understanding of human nature and spiritual development.’  He draws freely on teachings from other traditions and spiritual writers who acknowledge no particular tradition.

Many critics deplore this approach and deride his claims to follow the Christian tradition.  I have included three such criticisms, but need to say that these men are all either Evangelical or very conservative in matters such as gender and the place of women. His critics include an American academic, Professor of Modern Christianity, Michael McClymond, who writes ‘Though Richard Rohr wraps himself in the Mantle of Catholic and Franciscan spirituality, much of what Rohr presents contradicts the teaching of the Catholic Church and historic Christianity.’

Ian Paul, an Evangelical Anglican theologian in a review of The Universal Christ, says ‘I did not find a single biblical text which was cited with any plausibility; every single one was either misread, or taken out of context, or even cited with errors. Rohr is leading us down some very odd paths and a long way from orthodox Christian faith at numerous points.’

A Catholic theologian, Douglas Farrow from McGill University, Montreal is very critical of Richard's views on the Incarnation expressed in his book The Universal Christ: ‘Like the Gnosticism of old, this syncretistic pseudo-scientific neo-paganism can be dressed up in Christian language, given Catholic sacramental trappings, and successfully marked to those who want to be religious without genuine conversion to God through Jesus the Christ.’

I have tried to establish how many daily emails are sent out, but the closest I can get is ‘hundreds of thousands’.  The Centre for Action and Contemplation could not help me with any information.  This seems a small number to me knowing just how many of my friends and acquaintances receive them in Melbourne.

Richard writes that Franciscans are required to ‘somehow make the Word of God accessible to the ordinary person; to invite them into the fullness of their own life and not just talk to the highly educated or church insiders.’ So, through the gift of the Daily Meditations, people are enabled to develop their skills in meditation and contemplation, which he describes thus: ‘Contemplation is a different way of knowing.  It is the true meaning of the word, it is pure 'consciousness' which is a humble participative knowing the One who knows all things.’

Each week Richard and his team selects a different theme and for five days provides a daily meditation, with a summary of those meditation on the sixth day.  So, by way of introduction, I have chosen three days from one week's meditations, which you will receive by email from the Library and which we can discuss from the point of view of whether the meditations do achieve what he seeks to achieve and whether or not contemplation is a 'different way of knowing'.

Richard has written many, many books and articles which readily available from mainstream online booksellers and the Centre for Action and Contemplation. Also from the Carmelite Library. The three books I have on my shelf out of the 162 books he has published are

Posted by The Carmelite Library at 17:37