‘A Bridge Between : Spanish Benedictine Missionary Women in Australia’ by Katharine Massam

A book review by Philip Harvey first published in The Melbourne Anglican, September 2021 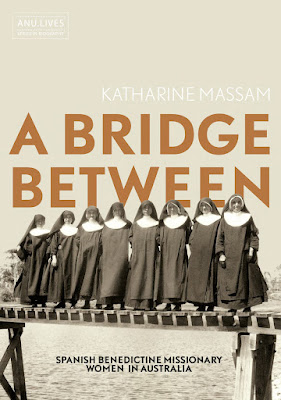 The religious orders are intrinsic to the history of Australian settlement. Yet accounts of the different orders vary wildly in coverage. The Josephites, for example, and their founder Mary MacKillop (St Mary of the Cross) enjoy a wealth of study, while the Carmelites have no official in-depth published history. The genre ranges from HQ histories with little to say beyond names, places, and dates, through to copious reference works like the Jesuits’ biographical dictionary.

Prominent in this literature is New Norcia, the Spanish Benedictine monastic town that has flourished in Western Australia since 1847, the year Melbourne became a city. But this new book is no conventional history of that place. Katharine Massam has worked in depth with the sources, many previously unknown, much translated from Spanish, to piece together the women’s side of the story. Gender, race, language, hierarchy, nationality, law and canon law, rules of orders and cultural styles – all of these social factors are at play as each new wave of sisters arrives from Spain, and elsewhere, to work in a mission field focussed on the Indigenous population.

Her history spans the 20th century, from the arrival of the first nuns in 1904 to the commemorative return visit of the last sisters in 2001. Teresians, Josephites and then Benedictine nuns operate the New Norcia school, then the orphanage, working alongside but separate from the main foundation of Benedictine men. Personalities, ambitions and conflicts are handled with a cool detachment and insight. Massam makes the story highly readable, indeed dramatic, through her sympathetic reading of all kinds of people, whether abbots, bishops, and other superiors; monks, nuns and other church folk; Indigenous men, women and children, living in a world that has changed radically from anything they had ever known. The tensions are identified between rapid social change and lives regulated by prayer, instruction and compassion. The many photographs in colour and black-and-white give a challenging and inspiring parallel narrative to her words.

The style, scholarship and substance of ‘A Bridge Between’ show it is time for historians to look anew at the world of the religious orders, in the light of the social upheavals in the world going on around them, and their own charisms borne out of time and experience.

Massam’s history appears at the other end of the life cycle of most of the orders in Australia. The days are over of regular yearly vocations to join orders with, in many cases, a sense we are looking at closing chapters. Hers is a new kind of exploratory writing about the orders, but also Christianity in general in Australia. It is an exemplar. She deals directly with main issues of racial assimilation, separation of Aboriginal children, and cultural dominance. The text keeps a firm account of transgressions and misunderstandings while moving into the necessary space of naming and reconciliation. Her sensitivity to all sides, her ability to ask questions that affect lives, her determination with the documents, show how to treat such complexities while speaking to their truths. Similarly, she casts her wizened eye on the internal management processes of the Catholic Church, showing how the beneficence of key figures, grit and some grace, and even a spot of luck can make the difference to productive outcomes. Nor does she shy away from describing the sometimes precarious nature of the sisters’ existence when these variables are not all in place.

Posted by The Carmelite Library at 16:01