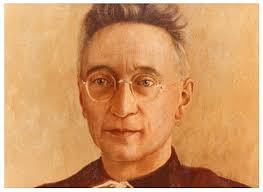 World Press Freedom Day is celebrated on the 3rd of May. Carmelite Titus Brandsma is to be canonized as a saint of the universal church 11 days later on the 15th May. In this article we link the two by recognizing Titus Brandsma in his role as a journalist. The story of his remarkable life as a Philosopher, Theologian, Spiritual Mentor, Mystic, Pastor, Remarkable Human Being, etc. can be found at www.carmelite.com.au

In 1939 Adolf Hitler’s Nazis occupied through brute force what was then Czechoslovakia. It was the beginning of the German invasion Into Austria, Poland, Denmark, Norway, Belgium, the Netherlands, France, the UK’s Channel Islands, the Soviet Union and Italy. On the 10th May 1940 the infamous Battle of Rotterdam, a military campaign that saw the surrender of the main Dutch forces four days later, secured the Netherlands as an occupied country of the Third Reich. Journalists in the Netherlands were put on notice not to resist and among them was the Carmelite, Titus Brandsma.

Titus saw the ominous development of Nazism with his use of unequivocal, forceful language as he warned the Dutch against Hitler’s tyranny, “the Nazi movement is a black lie.” He immediately came to the notice of the Dutch National Socialist Party and hence became a marked man. As the German tanks with their red war banners and swastikas smashed their way across the Dutch frontier any opposition to the occupiers was considered traitorous; religion came under attack and Jews were victimized. Priests and religious were prohibited from the positions of principals of secondary schools; their salaries were reduced by 40% and all Catholic schools were forced to expel Jewish students. Titus defended the freedom of the press and of the Catholic press in particular. For this he was put to death.

Seventy-seven years after the end of World War 2, on average every five days a journalist is killed for bringing information to the public. Attacks are sometimes perpetrated in non-conflict situations by organized crime groups, militia, ‘security’ personnel, and even local police. These attacks include murder, abductions, harassment, intimidation, illegal arrest and arbitrary detention. Fifty-five
journalists were murdered in 2021 and two hundred and ninety three are in prison. (UNESCO) The Committee to Protect Journalists executive director, Joel Simon said in a statement about these numbers that “the numbers reflect two inextricable challenges-governments are determined to control and manage information, and they are increasingly brazen in their efforts to do so.”

The Nazis in the Netherlands introduced a policy of ‘enforced conformity’ which systematically eliminated non-Nazi organisations. This was a shock to the Dutch who had traditionally had separate institutions for all the main religious groups, particularly Catholic and Protestant. The process was opposed in the Catholic press and by 1941 all Catholics were urged by the Dutch bishops to leave any associations that had been Nazified. Catholic newspapers were Informed they had to accept press releases and advertisements emanating from official Nazi sources. Church authorities appointed Titus to convey to all Catholic editors in the Netherlands that they must disobey this command. The church hierarchy warned Titus that he was being asked to take on a most dangerous mission and gave him the option to refuse. He accepted the mission freely and willingly. From that moment as he travelled the length and breadth of the Netherlands to speak with editors he was shadowed by the Gestapo.

The German occupation of the Netherlands which lasted from 1940 until the German surrender in May 1945 saw the majority of Jews in the country sent to Nazi concentration camps. By the end of the war in 1945 only around 38,000 of the 140,000 Jews that lived in the Netherlands survived. Many were sent to Dachau the place of execution for Titus Brandsma.

The atrocities committed during this time were barbaric, and Perhaps the most shocking example was the forced eviction of Jewish psychiatric patients when hundreds of disabled and mentally ill Jews were transported to Auschwitz-Birkenau.

The International Federation of Journalists (IFJ) representing 600,000 media professionals in more than 140 countries speaks for journalists within the United Nations by promoting international action to Defend press freedom and social justice; condemns the use of media for propaganda or to promote intolerance and conflict and believes in freedom of political and cultural expression. Currently the IFJ is working with journalists in the Ukraine particularly with a Sky UK news crew as well as a Swiss journalist who was recently attacked and severely injured by Russian forces.

Australian journalist, Peter Greste, notable for his 13 months of imprisonment in a Cairo jail for his alleged criticism of the Egyptian regime delivered the University of New South Wales 2016 Gandhi
Oration. He reminded his audience that Gandhi was a journalist as Well as being a lawyer, politician and spiritual leader. Mahatma Gandhi launched and edited a newspaper in South Africa and later in
India where all his writings in spite of danger to himself were in support of an unwavering commitment to facts. Gandhi’s philosophy, said Greste can be boiled down to one idea that peace, dignity and security can only be guaranteed when we respect the human rights of all. Gandhi and Titus Brandsma had a lot in common.

Titus was arrested on January 19, 1942 and taken to a prison at Scheveningen near The Hague. He was denounced as an enemy of the German mission with the claim that his hostility is proven by his
writing against German policy towards the Jews. It was well known by the German authorities that since 1935 he was in agreement with many Dutch intellectuals in their public condemnation of the Nazi persecution of Jews. On March 12 Titus was transported to the notorious penal settlement at Amersfoort. A fellow prisoner at Amersfoort recalls Titus concern and care for the Jews. In late April
Titus was transferred to Dachau concentration camp where on Sunday July 26, 1942 he was injected with a deadly drug. He died within ten minutes.

In celebration of World Press Freedom Day and the canonization of Carmelite priest, Titus Brandsma we are reminded that there are Core principles of journalism that Titus and journalists in the twenty-
first century deem sacrosanct. These are truthfulness, accuracy, objectivity, impartiality, fairness; to seek out the truth and act with integrity. Applying these principles in real life is hard but examples
such as Titus Brandsma and other heroic journalistic figures Demonstrate that public enlightenment is the forerunner of justice And the foundation of democracy. Titus died for the truth; Titus died for his faith; Titus died so that others might live.

Peter Thomas has worked in radio and television both as a producer, writer, director and presenter of current affairs and news, light entertainment and religion. He co-founded Albert Street Productions, an independent documentary production company that produced features both for Australia and international television including the ABC, SBS, all commercial networks and the Discovery Channel. He has taught Church & Media Studies at Yarra Theological Union and Radio Journalism at RMIT University, Melbourne. A passionate broadcaster, Peter maintains a weekly radio commitment. He is married to Marcella with four adult children, nine grandchildren and has a special interest in meditation and mindfulness practices.

This article was first distributed by the Justice, Peace, Integrity of Creation Commission of the Carmelite Order, JPIC 114, April 2022.

Posted by The Carmelite Library at 16:12