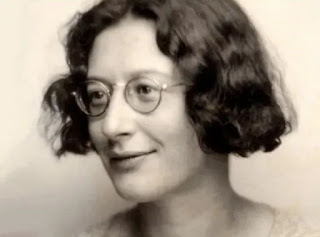 Wednesday the 7th of September 2022

The three women we are reading today lived through the 1930s in Europe, a period that witnessed the rise of totalitarian states and culminated in a world war that involved the persecution and destruction of Jews known as the Shoah, or Holocaust. It is in this context that we read their different understandings of a central fact of Christianity: the Cross of Christ.

Edith Stein on the Cross

Edith Stein adopted the name in religion Teresia Benedicta a Cruce when she entered the Carmelite Order in 1933. Teresia after the guiding light of the sisters, Saint Teresa of Avila, and Benedicta after Saint Benedict. Crucially, as we would say in English, she added ‘of the Cross’, as an indication of her dedication to the cross of Christ, but also fairly clearly in emulation of Teresa’s great protégé, Saint John of the Cross. A central work of Stein’s has the slightly formidable title ’The Science of the Cross’, an extensive study of the thought of John of the Cross, the manuscript of which was found on her desk on the day she and her sister were arrested by the Nazis. To begin to understand Edith Stein, there is no way around the fact that we must learn something about her theology of the Cross.

Concerned for her welfare as a person of Jewish identity, the Order transferred Edith Stein to a Carmel in Echt, the Netherlands, before the outbreak of the War. She lived there with her sister Rosa. Edith was not allowed to teach due a law forbidding Jews from teaching, but did continue to instruct the sisters inside the community. They later said that she was preparing herself for life in a concentration camp by enduring hunger and cold, behaviour in solidarity and empathy with those persecuted that we also see in Simone Weil. Eventually she and Rosa were arrested in a round-up of Jewish converts, sent first to Westerbork, where Etty Hillesum witnessed their presence, as we said at the opening, then sent from Holland to Poland and death at Auschwitz in August 1942.

Edith Stein writes , ‘One can only gain a scientia crucis (knowledge of the cross) if one has thoroughly experienced the cross. I have been convinced of this from the first moment onwards and have said with all my heart: ‘Ave, Crux, Spes unica.’ (I welcome you, Cross, our only hope.)’

‘One cannot desire freedom from the Cross when one is especially chosen for the Cross.’

‘”Thy will be done,” in its full extent, must be the guideline for the Christian life. It must regulate the day from morning to evening, the course of the year and the entire life. Only then will it be the sole concern of the Christian. All other concerns the Lord takes over. This one alone, however, remains ours as long as we live … And, sooner or later, we begin to realize this. In the childhood of the spiritual life, when we have just begun to allow ourselves to be directed by God, then we feel his guiding hand quite firmly and surely. But it doesn’t always stay that way. Whoever belongs to Christ, must go the whole way with him. He must mature to adulthood: he must one day or other walk the way of the cross to Gethsemane and Golgotha.’ (Sullivan 125)

Etty Hillesum on the Cross

On July 26, 1942 the Dutch Catholic bishops protested against the deportation of Jews from Holland by having a pastoral letter read in all the churches. The life of Edith Stein was decisively influenced, like those of thousands of other Jews, by the Germans’ retaliatory action to this pastoral letter, ordering the immediate deportation of all Catholics of Jewish descent. Etty Hillesum lived with the same kind of threats. She freely chose to go and support and work with detainees in the main transit camp in the Netherlands known as Westerbork. Members of her family, including her parents, were sent there and Etty saw it as her calling to be with the victims. When we read her diaries this is the culmination of the underlying reality she keeps mentioning in passing all the time. She and many of her friends live in a wartime situation of extreme social abuses, one in which their personal identity compromises their very existence. Here is someone who, like thousands of others at the time, tries to live a normal social life while aware that at any moment it could be taken away from her by force. Although not a professed Christian, Etty is highly conversant in Christian language, just as she is in Judaism, even though she is not practising. When we read her we are left wondering, what do these words ‘Christian’ and ‘Jew’ mean if they are not applicable to someone like Etty Hillesum?

Here are two quotes from Etty Hillesum on the Cross, the first written early in her Diaries. This entry presents us with the seriousness with which Etty took her decision to start keeping a journal. Our understanding of what we read deepens once we appreciate the vocational choice she has made about her writing.

‘You have to describe the concrete, the down-to-earth reality, and so illumine it with your words, with your spirit, that the soul behind it evoked. If you allude directly to the so-called soul, then everything becomes too vague, too formless. If I really get it into my head more and more firmly that I want to write, do nothing but write, then I must also realize that I am preparing a cross for my back – I already feel it every now and then and shudder a little. The question is, whether I have the talent for it.’

The other quote is the final words of the Diaries. Written privately, they speak conclusively of the role Etty knew she had played in her relations with others.

‘We should be willing to act as a balm for all wounds.’

Simone Weil on the Cross

Essential to Weil’s thought are her teachings about affliction.  This word had special meaning for her. Unlike Stein and Hillesum, Weil escaped the Nazis, travelling first to New York and then to London. Throughout this closing period of her life she suffers guilt for not being with those who are enduring occupation and her strongest desire is to return to France to work in the extremest conditions with the French Resistance. Her own physical wellbeing deteriorates, not helped by her refusal to eat any more than what she believed to be the subsistence level meals rationed out to the French poor. In other words, she was starving herself to death, a condition that combined with tuberculosis led ultimately to her death in a sanitorium in 1943.

And so to conclude, here are two quotes from Simone Weil on the Cross, taken from the numerous meditations she wrote down throughout her life on this subject.

‘The Trinity and the Cross are the two poles of Christianity, the two essential truths: the first, perfect joy; the second, perfect affliction. It is necessary to know both the one and the other and their mysterious unity, but the human condition in this world places us infinitely far from the Trinity, at the very foot of the Cross. Our country is the Cross.’ (Panichas 456-7)

Posted by The Carmelite Library at 19:33