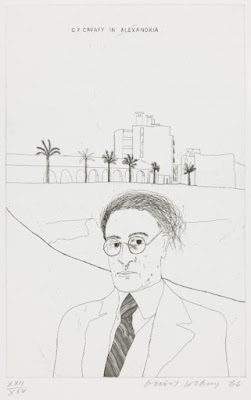 Portrait of Cavafy in Alexandria, by David Hockney (1966)

Constantinos Petrou Cavafy was born in 1863 in Alexandria, into a family of merchants, the last of seven brothers. His father’s death when he was seven brought about a sharp fall from wealth and prestige in the Greek community in Muslim Egypt, to a penurious youth between England and Paris; he returned in 1877 to Alexandria at the age of 14. Although he lived in Constantinople from 1882 to 1885, the rest of his life was spent in Alexandria, the city that became a theme of his poetry.

His working life was spent in a clerical position at the Ministry of Public Works in Alexandria, (administered by the British until 1923); his poetry was unpublished, although from 1891 to 1904 he produced it on broadsheets he distributed to his friends. From 1903 he became better known as a literary figure in Greece, although little understood. Not until the 1920s was he appreciated for his particular style; he died in 1933.

The city of Alexandria was founded by Alexander the Great in 331 BC and named for him. It was the site of his tomb in antiquity where it was seen by several Roman Emperors. Alexandria suffered many disasters, both military and natural, including an earthquake in the 4th c. CE that destroyed the famous lighthouse Pharos. Following the Muslim conquest of Egypt in 641 CE Alexander’s tomb became lost.

Cavafy is an urban poet. His city is envisaged as a metaphor, both personal and historical, creating “a self-contained mythical world that serves to represent both his special view of Greek history and his image of the perennial human predicament.”[i] He shares this use of city and country metaphors with contemporaneous poets such as Eliot, Pound, Yeats and Joyce.  His work provides “a poetic evocation of Alexandria in both its contemporary and ancient manifestations,” reaching on to other Hellenistic cities such as Antioch and Beirut and to the empire of Byzantium, and so enabling ‘his tragic sense of life’ to be projected across eighteen centuries of Greek history and eventually in his last works to be expressed in universal terms.[ii]

Although Cavafy is known as the poet of the city Alexandria, his attention spans across the Greek diaspora, whose centre is not Athens but Constantinople. He himself lived in London, Paris, Liverpool and Constantinople and he spoke three languages. Nearing the time of his death he refused an invitation to stay with a friend in Athens, where he had undergone surgery for cancer of the larynx, saying: “Mohammed Aly Square is my aunt. Rue Cherif Pasha is my first cousin, and the Rue de Ramleh is my second. How can I leave them?”[iii]  He returned to Alexandria and died in the Greek Hospital there. He will treat the Greekness of the diaspora following the fall of Constantinople in 1453 as a matter of language. It could be added that the current diaspora is heavily represented in Australia, with Melbourne being known as the third Greek city of the world, after Athens and Thessaloniki.

Among the Greeks to have migrated to Australia was Manoly Lascaris, a descendent of the Lascaris emperors of Byzantium and the life partner of Patrick White, whom he met in Alexandria during the Second World War. Mr. Lascaris expressed the devotion of Greeks to the Greek language in this way: “What survives is language and Greek words give me strength. It is like going to church! For all of us immigrants, our native language is the only church in which we can venerate the absent deity.”[iv] Cavafy refers to this soul of the Greek language which is inaccessible to foreigners in several poems. In “Of the Sixth or Seventh Century” (i.e., before Arabic has become the standard speech) he says, in Alexandria “she speaks our language still. Throughout the Greek world it’s destined to fade away… (but we) have once more borne the sound of Greek speech back to her soil.”[v]The Samian, now beside the river Ganges (reminding us that Alexander’s conquests extended as far as Afghanistan and India), reflects on his death with satisfaction: “There among compatriots I shall be. And forever after I shall speak Greek.” [vi]

The hegemony of Greek speech and Hellenic culture is taken for granted in the face of repeated disasters overtaking the Greek civilization centered upon Constantinople. (Also called Roman, as the inheritor of the Roman Empire, but never Latin.) The great wave of displacement called the Catastrophe of Smyrna (now Izmir) occurred in September 1922, 100 years ago. The Turks did not accept the First World War provisions of the victorious allies and in the ensuing conflict more than one million Greeks became refugees in Greece and overseas, while the Christian city of Smyrna was burned to the ground. When the artist Ai Weiwei interviewed some of the participants in the present Mediterranean refugee crisis, one Greek coast guard said:

“Personally, I believe that one of the reasons our island had to carry this great burden is because it’s a big island with a population of almost 100,000. The people of the island, our grandfathers and grandmothers, were themselves refugees in 1922, so we know what it means to be a refugee. We feel their pain, and we feel empathy for these people who are now refugees.” (500,000 refugees passed through Lesvos in 2015 alone).[vii]

Cavafy, in 1922, seems to be writing about events in ancient Commagene, a location now part of modern Turkey, important to Cavafy as a nominally Greek culture beleaguered by larger, non-Greek powers: the Romans at the beginning of its history, and the Arabs at the end.”[viii] In “Epitaph of Antiochus, King of Commagene” (1923) he says: “The life he lived was just, and wise, and gallant. The life he lived, still more, was that finest thing, Hellenic — mankind holds no quality more precious: among the gods alone does anything surpass it.”[ix] Here ‘Hellenic’ refers to ‘a person of broad Greek culture… in outlook, culture, and taste; a state of mind rather than a nationality.”[x]

Eliot referred to the ‘mythical method’ as “the manipulation of ‘a continuous parallel between contemporaneity and antiquity’ through what Joyce called ‘two-planed writing.” But rather than deal with the parallel in individual poems, Cavafy tended to create two poems contrasting the ancient and the contemporary city and distributed them at the same time.[xi] The contemporary city is experienced, often in memory, as the “Sensual City” where erotic encounters with young men have inspired the poet to see a kind of ‘purity’ in the grimy surroundings of the brothel quarter, the Quartier Attarine, where shamed and shabby figures are transformed into ‘beauty and vitality’ in those ‘shaped for and dedicated to the Hellenic kind of pleasure.”[xii] Cavafy lived in rented rooms on the outskirts of this quarter for 26 years at the end of his life, once explaining “Where could I live better…Below, the brothel caters for the flesh. And there is the church which forgives sin. And there is the hospital where we die.”[xiii]  The contemporary, or modern city, is a creation of the imagination, “a city of remembered sensations.”[xiv]  But the memories, in poems written from 1904 onwards, are not only of ‘fleshly delight and joy’ but inevitably also of frustration and loss, ‘the unmetamorphosed, transient, and partial world of the poet’s actual city.’[xv] “Let me submit to Art” he says in a poem from 1921, “Art knows how to shape forms of Beauty, almost imperceptibly completing life, blending impressions, blending day by day.”[xvi]

This contemporary city is infused and enfolded with Hellenic antiquity, particularly Late Antiquity (approximately 200-400 C E), the fault line between Christianity and the ancient religion Peter Brown names as ‘classical paganism’.[xvii] For example, the Emperor Julian, called the Apostate, (331 to 363 AD; ruled 361-363) who tried to return the state worship to the antique gods, fascinates Cavafy. Julian, born in Constantinople, a nephew of Constantine the Great, became Emperor at the age of 30 after a military career and a series of family murders. Although raised as a Christian, he converted to Neoplatonism (Plotinus) and was a devotee of Sol Invictus (The Unconquered Sun). This period of time was the point of transition between a system of heavenly patronage and a more secular, in antique terms, approach to divine power through men of power.[xviii] So Cavafy does deal with spirituality, but it is spirituality as it fluctuates across the entire panorama of Greek history.

Cavafy referred to himself “not as a poet only”, but a “poet-historian”, a stance that “allowed him to see history with a lover’s eye, and desire with a historian’s eye” which brings about “the great and moving unity of the poet’s lifelong project.”[xix]

Poems read during the session:

But Wise Men Apprehend What is Imminent

Waiting for the Barbarians

Posted by The Carmelite Library at 17:37