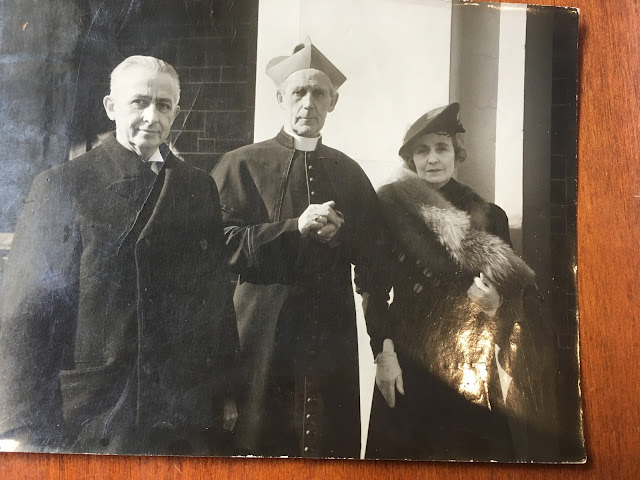 Preparations are underway for the celebration of the centenary of the Carmelite Hall in Middle Park. Archives are admitting to all sorts of treasures, including this photograph of Marcel Dupré (1886-1971)and his wife, with Archbishop Daniel Mannix. At the time this picture was taken (1939) Dupré was Professor of Organ Performance and Improvisation at the Paris Conservatoire; in 1954 he became Director of the Conservatoire. He was a prodigy. For example, in 1920 he gave a recital series in Paris of ten concerts of the complete works of Bach performed entirely from memory. His world tours took in Australia, including “a memorable organ recital” at Our Lady of Mount Carmel Church in Middle Park.

The verso of the photograph contains compliments to Fr Paul Clery O.Carm., priest of the Middle Park Church, signed with the recognisable squiggly initials of Daniel Mannix. Another hand has written later in blue biro: “Marcel Dupré, the leading organist in Paris at that time, taken in Melbourne when he visited Australia in 1937 with Madame Dupré. Dupré gave a memorable organ recital in Middle Park Church.” Our scribe means 1939; Marcel and Jeannette Dupré's only visit to Australia was June through August. Their departure from Sydney for Vancouver was on the 31st of August 1939, only four days before the outbreak of the Second World War. 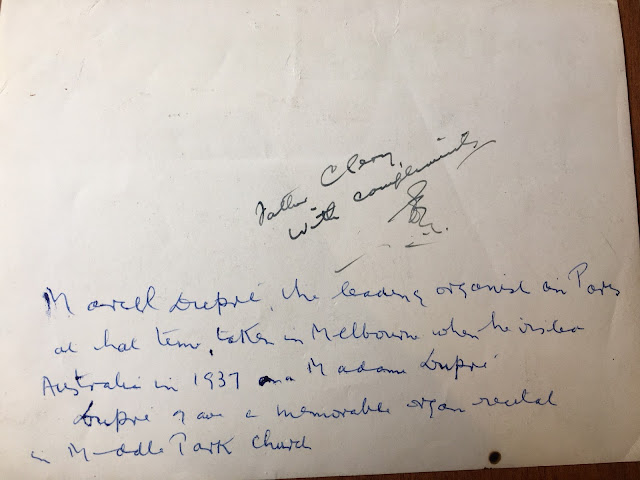 Posted by The Carmelite Library at 20:23

THE CARMELITE LIBRARY - NOW CLOSED
A special theological library dedicated to study and research in the areas of Spirituality and Mysticism. The collection is unique within Australia.
214 Richardson Street, Middle Park 3206 Victoria, Australia. Phone: 9682 8553 Email:
librarian@carmelitelibrary.org

The Library catalogue is available via the homepage of the Library website, just click CATALOGUE. Our holdings can also be found on the catalogue https://divinity.on.worldcat.org/discovery

of the University of Divinity.