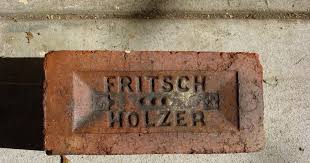 The Upper Hawthorn Brickworks was started by brothers Johann, Martin and Anton Holzer and Gustav Augustus Fritsch. The Holzers and Fritsch had brickworks that operated next door to each other and the two works merged in 1883 to form the largest brick making company in Victoria. At its peak, they employed around eighty people and were making over 250,000 bricks per week. Gustav Augustus Fritsch and Christina Fritsch (née Holzer) were the parents of Augustus Andrew Fritsch, the architect of many church buildings throughout Victoria, including the Carmelite Hall. His name is on the stone in Richardson Street, laid by Daniel Mannix in 1918. At the time of designing and building this Hall, Fritsch fils was also working in collaboration with Walter Burley Griffin and his wife Marion on the designing and building of Newman College in Parkville.
Posted by The Carmelite Library at 18:16