This is Jenny Raper’s presentation to the Spiritual Reading Group on the Chinese version of Ch'an Buddhism (Zen in Japan), given in the Carmelite Library on Tuesday the 17th of April. 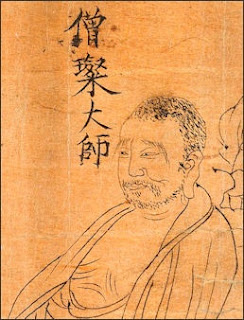 When thinking about the spread of Buddhism I visualize a tiny spring of pure water pushing up gently through the forest floor high in the mountains, into a tiny rivulet of water flowing downhill to become a wider and faster stream as it gathers speed through the plants and the earth.  As it flows and widens, other small streams flow in and more water pours down the widening cleft, as what is now a river makes its way to the plains where it finds many channels through which it flows, creating a great estuary flowing into the ocean.

Buddhism was like this.  One man rising up to meet a spiritual challenge creates a trickle of interest which gathers speed and widens as it flows through many ancient cultures until it is like an estuary – a river of many channels, each reaching the ocean of humanity. His teachings flowed from a small, mountainous kingdom into nearby cultures and gradually broadened into the whole of South East Asia.

The ancient Chinese spiritual beliefs and practices were well established when Buddhism arrived during the Han Dynasty – the 2nd imperial dynasty- from 206BC until 220CE. They had written inscriptions as early as 3000 BCE and had developed oracle texts during the Shang period (C1200 BCE), their religious beliefs centred on the role of the King as the diviner of the will of the Great God and the lesser gods.  He was the living embodiment of the Kingdom and he alone could communicate with his dead ancestors who continued their role in guiding the success of the dynasty.

Towards the end of the Shang period, a great mystical teacher arose – Lao-Tzu - who was venerated as a sage.  He believed people can access the power of “The Way” or the “Tao” using his collection of ancient texts based on divinations of the past Emperors. This is the great Book of Changes known as the I-Ching.  People used this book of oracles as a meditation and as a method of discovering The Way in their lives.

Other Taoist classics followed over the centuries – the Classic of History, The Classic of Odes, The Record of Rites, The Spring and Autumn Annals and possibly a Classic of Music. Later in the Zou period (C5th – 221 BCE) a concept appeared of Tian translating as Heaven or Nature.

The Way or The Tao taught that the entire universe and everything in it flows from a mysterious and unknown force, known as the Tao.

Tao is The ultimate reality
Explains the powers that the universe and the wonder of human nature
Believes everything is One – despite appearances.
Evil and Good only occur when people forget all is One.

Lao-tse taught that (even if it is difficult to grasp) “The Tao that can be spoken of is not the true Tao”. Taoism was the one Chinese teaching that offered ways to connect to the spiritual world and secure blessings and protection.  It was a path to mysticism through shamanic practices and meditation.  Meditation was the great tool, and monasteries arose (especially in the mountains, considered to be sacred) where the masters and monks practiced and refined their meditation techniques.

Practice Non-action
Practice being soft and weak
Practice guarding the female and never move first
Practice being nameless
Practice being pure and tranquil
Practice doing only good
Practice having no desire
Practice knowing when to stop
Practice yielding and withdrawing.

There were many levels of The Tao which were practiced by different groups in society – from the ordinary people to the priests and the Kings.
A young scholar and teacher, Kong Qui, who lived between 551-479 BCE – became known as Confucius.  He did not promote a religion, but the way of the 'gentleman', personal relationships, the conduct of government and most particularly, the conduct of filial devotion, humaneness and ritual practice.  His teachings were recorded in The Analects of Confucius and used by his followers much like a religious text.  The Han Dynasty was strictly Confucian and with its fall Confucian beliefs were vulnerable. We know he visited Lao-tzu, but was not impressed with his spiritual ideals of following The Tao. Confucius was more concerned with correct behaviour and the stability of society. Taoism and Confucianism existed side by side for centuries, often one or the other out of favour with the court. It was into this world of Chinese belief systems that Buddhism arrived.

The Buddhism that arrived in China had already undergone several centuries of development and possessed a huge collections of scriptures  – the Dharma - which had been created by his later followers of Buddha from the oral chanting of the Sanga, some centuries later.  An important point about them is that these scriptures are open– there is potential for new wisdom.

However, some ancient teachings are of paramount importance to being a Buddhist. such as The four noble truths –
Life is inevitably sorrowful
Sorrow is dead to craving
Sorrow can only stop if craving stops
Disciplined conduct and meditation can stop it

The fundamental law of the universe: All life is “transient and changing and they have no eternal Self or soul, no abiding individuality” [Quoted by Theodore William De Bary]

The Mahayana school of Buddhism, which came to China, further taught that there was a heavenly pantheon of buddhas and bodhisattvas.  Was Buddha divine? Well, he had passed away from existence, so no longer in the world.  Yet, to become a Buddhist, one had to profess - “I take refuge in the Buddha, the dharma and the sangha.”  These difficulties were able to be overcome by the Chinese in using Taoist terms – the Indian texts were translated and Chinese schools came into existence. Following the Mahayana school, their practice was largely based on reading the scriptures, learning them, probing the hidden meanings using various methods of commentaries to gain deeper understanding.  This way was accompanied by meditation and asceticism.

For many Chinese Taoists this was really an academic way of being.  Some scholars and teachers developed ideas that reflected the Taoist teachings and emphasised meditation; this school came to be called Cha'an, from the Indian dhyana.  Owing to the difficulty of translation, the earliest texts on yoga and dhyana became sinasized (or Chinesed) into various levels.  The emphasis was on meditation 'as a means of attaining an intuitive recognition with all conceptual thinking set aside and external influence rejected.” (De Bary) Gradually, this style of Buddhism became separate from studying the scriptures and for teachings to be transmitted 'mind to mind'.  Through this, the role of a master became essential for the student and all practice and study was done under his direction.  The Master was entirely in charge of the student's progress,  unlike the Mahayana school where the monks were taught and meditated together. The Cha'an student was also required to work for the common good of the community of monks as an integral part of his training. Thus, all of life became a meditation – by concentrating the mind entirely on tasks one could apply a meditative effect – today called 'mindfulness'. For example, we all know of the raking of gravel into perfect symbolic patterns – the person wielding the rake becomes the function and at one with the symbols and the energy of raking in a meditation.

One of the best know methods of training was the use of the gongan (Koan in Japa). This was the use of a short story containing a paradox or enigmatic question and it meant 'public case'.  In the early period, this training was done in public with students responding the gongan in a meeting of monks. Gradually, these stories were collected and used as handbooks of instruction.  A further development of this method was  when a gongan could not be answered satisfactorily, beatings, shouts and gestures were applied by the master to cause the student to have sudden awakening to the Truth!  A tradition developed whereby students who had advanced could go on pilgrimage to another master in order to progress in his understanding.

The goal of Cha'an was to achieve enlightenment.  All Buddhists aim for this, however, Cha'an taught that this could only be achieved by deep meditation practice.   One story says that the Buddha himself used this method and that it was brought to China, after 28 generations in India, in 520 CE.

As the centuries passed and the succeeding dynasties rose and fell, Buddhism rose and fell with them.  Lavish temples and monasteries were built with monies from the court and the wealthy; many of these temples and monasteries became very wealthy in their own right.  In 845 CE a persecution of Buddhists was instituted – however this varied and the north became the centre of the persecution whilst the south where there was less Confucian structure continued their support of Cha'an Buddhism as a practice of the provincials.

One of the sticking points in China with Buddhism was monasticism. The early monks were charged with being unfilial because they had to leave the family.  A defence was offered by a Cha'an Master called Mingben.  He wrote that filiality is the role of the householder and that the monk shows his filiality by nurturing his parents' dharma-nature and by practice of 'formless' love.  He can, by his devotion to meditation apply merits to his parents whether they are alive or dead.  He said there are two forms of love, one near and intimate and the other 'formless' – which has no end.  The great end of formless love is so that the parents can end their existence of rebirth and suffer transmigration.

Cha'an became associated with simplicity and discipline in all realms of life.  The monks lived a severe life – no possessions, working hard for the monastery, meditating in silence for long periods, attending to their Master and undergoing constant testing until their 'awakening' to the Truth.  This Chinese style of Buddhist practice has retained its core and has flowed into South East Asia where it has developed its own flavours.  In Korea it is known as Seon and in Japan, famously, Zen.
Posted by The Carmelite Library at 18:56