The plan for Spiritual Reading Group in March was that Susan Southall would introduce us to the poetry of the American poet Walt Whitman. Events have overtaken us. The Group will reconvene at a time when the Carmelite Library re-opens. For now though, here is Susan’s paper. The selected poems for reading are also posted on this blog. 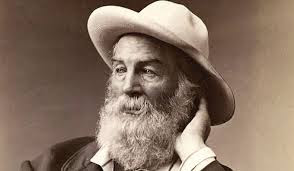 Walt Whitman was the great, expansive poet of American democracy, a transformative literary innovator, and one of the most significant figures in American literature. He gives  answer to  Emerson’s query: can the magnificent project, the revival of an ancient ideal of democracy in their own time, survive and succeed? This is a question true to our own days, when Civil War is again the rhetoric of a divided nation.

When Whitman was born in Long Island, New York in 1819, the United States government, constitution, congress and president had been in existence for only 30 years. Whitman came from a stable background of Dutch and English New Yorkers in an agrarian society he would look back to with nostalgia. For while the acute difficulty of forming a nation at all, between the original 13 confederating states, would carry a legacy leading to Civil War and lasting to the present day, Whitman’s America was one of immense and unrelenting change. Much like today.

Whitman saw changes from sail to steam, horse-drawn carts to railways, letters that took weeks to arrive to telegrams, new financial systems (including crashes), new confrontations. A wave of feminism began in the 1840’s and Whitman was a strong supporter of equality between men and women. We have mobile phones; they had photography, and photography was an important influence on how Whitman described the world. “In these Leaves every thing is literally photographed. Nothing is poeticized,” he said.[i] We have Artificial Intelligence, a growing juggernaut; they had the Industrial Revolution. We have climate change; they had Darwin, and in both cases religious conservatives quoted the Bible and despised the science. We have the New Age: the early 19th century had a plethora of new religious and spiritual movements. Some of them influenced Whitman: spiritualism, Swedenborgianism, Harmonalism.

Each of the thirteen colonies making up the United States had its founding religion. Massachusetts and Connecticut were Puritan theocracies. Maryland settled Catholics, Pennsylvania Quakers, the Carolinas Anglicans. Some colonies were founded on a principle of religious toleration, notably Rhode Island, but there was by the time of the Constitutional Convention an openness to the separation of church and state. What made the Union difficult was not religion: it was economics: i.e. slavery.

“The paradox of liberty versus slavery at the nation’s birth is no paradox at all. Liberty was the right to own property. Slaves were property. Liberty for slaveowners meant slavery for slaves. Viewed from the slaveowner’s perspective, liberty was slavery. It was made much easier by … believing something that resonated with the Calvinist doctrine of predestination: those who were enslaved were those who were naturally inferior.”[ii] More recently, the devout Dutch Reformed who ran apartheid in South Africa believed the same.

Whitman had an almost religious devotion to the Union, but he was not an abolitionist. Politically he was a Free Soiler: he opposed the expansion of slavery into new Western territories on behalf of free white labour, maybe even free black labour, those who could not compete with unpaid slaves. He mentions slaves occasionally in his lists of the people and occupations making up the democracy; he disapproved of abolitionists who held demonstrations in New York with similar disruptions to Occupy and Extinction Rebellion today. Whether he was or was not a white supremacist, he thought the nation should be developed by the whites, which does not necessarily include the Irish, or immigrants in general.

This is the landscape of the Civil War.

Whitman’s most famous book is Leaves of Grass, a collection of poems which went through eight editions, with dates from 1855 to 1882. He developed a free verse that owes much to Shakespeare and the King James Bible. (Some of Whitman reminds me of Ecclesiastes). Whitman said that Leaves of Grass had a deeply religious purpose: “…the religious and philosophical influences on Leaves of Grass were the products of a specific moment, the 1850s, when several radical religious and philosophical influences came together.”[iii]

“He instinctively accepted deism’s centrality to American thought. It was, after all, the free thought of Jefferson, Franklin, and others that made toleration of all religions a specifically American phenomenon… Free thought also made him responsive to… Quakerism… Quakerism had more appeal to Whitman than deism because it made allowance for ecstasy and intuition, which the rationalistic deism did not…There was a special democratic emphasis to the Quaker mode of oratory, which carried the Protestant notion of the priesthood of all believers to a radical extreme.” [iv] He accepted all religions, but “it was particularly hard for him to have faith in the churches at a time when he believed rising capitalism was tainting religion. Like other reformers of the day, he was upset by the intermingling of money and religion in America.” [v] That sounds familiar too.

Whitman, who was, at various times, a journalist, a printer, and a publisher, was in a position to observe the decadent state of American politics. “The 1850s was… a decade of unprecedented political corruption, a time of vote-buying, wire-pulling, graft, and patronage at all levels of state and national government. Class divisions were growing at an alarming rate. Dislocations created by the market economy widened the gap between rich and poor.”[vi]Some of the figures in Whitman’s notebooks seem familiar:  from “…limber-tongued lawyers, very fluent but empty, feeble old men, professional politicians, dandies, dyspeptics…” to “…robbers, pimps… malignants, conspirators, murderers…infidels, disunionists, terrorists, mail-riflers, slave-catchers…body-snatchers…monte-dealers, duelists, carriers of concealed weapons, blind men, deaf men…gaudy outside with gold chains made from the people’s money…”[vii] These qualities can still be noted in politics.

Whitman, however, believed in the power of poetry to moderate and unite the nation. “He was confronted with what he saw as extremists on both sides: slaveholders cursing the government for threatening to interfere with slavery extension; abolitionists cursing the government and the Constitution for permitting slavery. It began to dawn on him that the greatest balancing agent could be poetry — poetry that took both sides while at the same time releasing the stream of curses.”[viii] The first, 1855 edition of Leaves of Grass …”was close to…antislavery activists of the fifties who were emphasizing the humanity of African-Americans…” for this reason African-American readers have often felt close to Whitman, from Sojourner Truth to Langston Hughes and June Jordan, who said, “I too am a descendant of Walt Whitman.”[ix]

The Civil War produced millions of casualties. When Whitman went into the hospitals to look for his wounded brother, he was appalled at the suffering. Lister’s discoveries in antisepsis were not published until 1867. The entire war passed without an understanding of sanitation. Typhoid, malaria, and diarrhea spread in camps and hospitals, overcrowded and attended by undertrained doctors who still believed in miasmas, night air, and lack of nerve force among the medieval obscurities behind disease. Hands were not washed. Amputations took place in stables, resulting in many tetanus deaths. There were “more than four hundred thousand wounded and six million sick in the Union Army during the four years of war.”[x] Whitman found his place in the war, “serving the Union cause as wholeheartedly as… any other frontline soldier. From December 1862 until well after the war was over, he personally visited tens of thousands of hurt, lonely, and scared young men in the hospitals in and around Washington, bringing them the ineffable but not inconsiderable gift of his magnetic, consoling presence… Whitman entered the rank, fever-ridden hospitals…like a breath of fresh air, bringing with him a knapsack full of humble but much-appreciated gifts: fruit candy, clothing, tobacco, books, magazines, pencils and paper. His long white beard, wine-colored suit, and bulging bag of presents gave him a decided resemblance to Santa Claus… (Unlike the official chaplains of the Sanitary Commission) he gave no lectures, handed out no tracts, and prayed no prayers for the immortal souls of white-faced boys writhing on their beds. Instead, he simply sat and listened…He ended the war as ‘The Good Gray Poet’ a beloved, almost mystical figure who personally embodied for millions of Americans a democratic ideal of sharing and brotherhood.”[xi] One wounded officer wrote, “A wounded soldier don’t like to be reminded of his God more than twenty times a day. Walt Whitman didn’t bring any tracts or Bibles, he didn’t ask if you loved the Lord, and didn’t seem to care whether you did or not.”[xii]

Transcendence is an “ameliorating strategy” in Whitman’s poetry, the belief that “everything physical has a spiritual counterpart”…” he is also the spiritualist who proclaims immortality, the progressive scientist who knows God has ferried his cradle for ages, and the Harmonialist who has a loverlike intimacy with nature and who revels in the senses…just as mesmeric healers and trance poets felt the power to soar beyond physical reality, so he has an ‘elemental’ capacity for ‘whirling and whirling’ beyond pain and suffering. [xiii]

Whitman sat by many death-beds during the Civil War. As Mark Van Doren asserts, “Heavenly death — it is a common phrase on Whitman’s lips, and he means it literally. For it is through death that he sees, as he believes, into the heart of creation — where of course life also is, as sister and bride. At the center of the universe life and death lie down together. Any great love plunges to this point in its career, as any great death — like that of Lincoln — becomes a carol announcing the union. Whitman is mystically serious about all this, which is why, together with the reason that he is already a magnificent poet, he reaches in his best poems the height that he does.”[xiv]