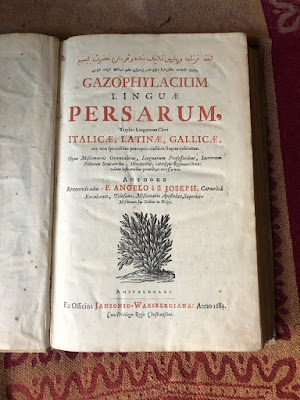 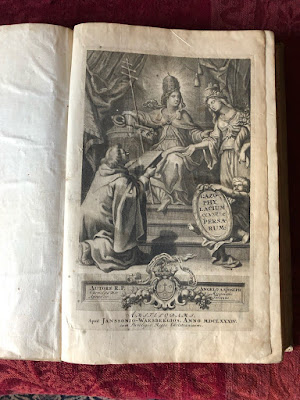 A dictionary or, to use a much more impressive synonym, a gazophylacium of the Persian language, with matching terms in Italian, Latin, and French (Amsterdam, 1684). Notes: The Carmelite mission to Persia, initiated in 1604 by Pope Clement VIII with the support of Sigismund III Vasa of Poland, resulted in many cultural exchanges, significant among them linguistic works on a two-way street. Thesauri, grammars, dictionaries, translations into and from Persian, were produced, including the first Persian version of St Thomas Aquinas’ Summa contra Gentiles (ms. Vaticano persiano 59). The Carmelites set up the first printing press in Persia. The Discalced Carmelite Ange de Saint-Joseph (1636-1697) would probably have trained in Rome before travelling East. A found record of a Teheran reprint of 2013 provided me with the name of his collaborator-editor, Muḥammad Ḥusayn Mar’ashi, whose name appears at the head-of-title in his own language. This record also supplied me with the transliterated Persian not to be found on the first record I uncovered, at the Carmelite Library in Boxmeer in the Netherlands. As the pictures show, ‘Gazophylacium linguae Persarum’ is arranged alphabetically in Italian, with cross indexes from the Latin and French. A fascinating short history of the Carmelites in Persia in the 17th century can be read in the Encyclopaedia Iranica here: http://www.iranicaonline.org/articles/carmelites-in-persia 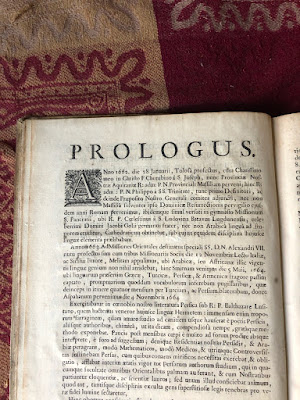 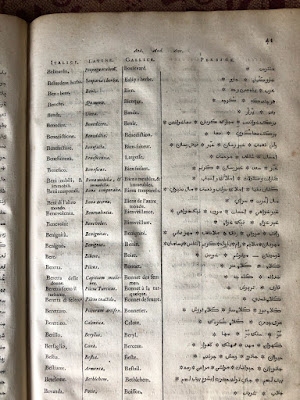 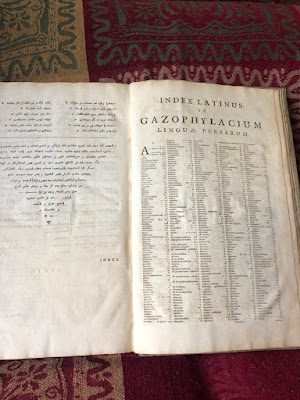 The Index that leads readers to the Latin equivalents in the main text
Posted by The Carmelite Library at 19:36