The Survival of the Documents of St. Titus Brandsma

The Survival of the Documents of St. Titus Brandsma

This article on the papers of St Titus Brandsma was published in CITOC News Online (Centrum Informationis Totius Ordinis Carmelitarum) on the 2nd of June, 2022 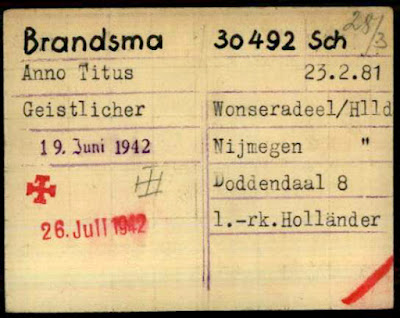 Father Adriaan Staring, O. Carm., as postulator general of the Carmelite Order, was responsible for obtaining reliable and relevant documents to be used in the process of canonization of Titus Brandsma. These historically reliable documents were to be used to prove Fr. Titus’ martyrdom. Better than all testimonies, these documents offer us insight into the Nazi persecutors’ and Titus Brandsma's own views on matters of faith and Titus Brandsma's acceptance of martyrdom. Fr. Staring was particularly struck by the 'happy coincidence or providence,' that many important documents survived the war and its aftermath. Here is a summary from his account of the miraculous journey of these documents. It concerns three different files.

1. The File of the Sicherheitspolizei

The file, Kirchliche Presse, contains documents outlining the activities of Titus Brandsma: the letters from Archbishop De Jong and his secretary Mr. Giese to Father Titus; the interrogation of Fr. Titus on January 21, 1942; the verdict of the “judge” of instruction of Hardegen and two reports on the matter. By the end of 1944, the Sicherheitsdienst had built an oven in Glanerbrug in which all documents from their archives in The Hague and other places were burned.

Carmelite Brocardus Meijer testified in the trial: “The deeds of his condemnation were confiscated by the partisans and sent to me and to the archbishop, who kept the originals, while copies were sent by me to the various newspapers.” But how did these documents reach Brocardus Meijer?

The Rev. Lambertus Smeets, rector of the Zenderen Grammar School, wrote to his provincial on June 19, 1945: “Mr Hilbrink in Zenderen, a member of the Dutch Internal Defense Forces, whose house the Krauts blew up, killing his father and brother, is in possession of the file of the S.S. concerning the accusations, etc., against Titus Brandsma. The Krauts left these papers behind when they left.”

Later, another official copy of the same file (however not a complete copy), was obtained from the office of the Sicherheitsdienst in Amsterdam. At the request of the Underground, this office was bombed and destroyed by the English on November 26, 1944, while the Underground themselves, acting as “firemen,” brought the documents out, saving them.

This file contains the letters of Titus Brandsma, his diary of the first days, his statement of his defense entitled “Why the Dutch People, Especially the Catholic Population, Resist the N.S.B. (the Dutch Nazi party), a meditation on the Stations of the Cross, a life of Saint Teresa, his lecture from Good Friday in Amersfoort, his poem written in Scheveningen, a report on the state of his health, some letters from Archbishop De Jong and from his cousin, the lawyer Brandsma, a doctor's certificate, condolences and witness statements about his imprisonment. These documents shed light on the feelings with which Father Titus accepted his imprisonment.

After the death of Father Titus, his cousin, Mr. Assuerus Brandsma, wrote to the Dachau concentration camp, requesting that Fr. Titus' personal belongings be returned. In fact, they were actually sent back, including the writings from his imprisonment. This happened just in time. A short time later, during a bombing of the S.S. barracks on the night of October 3-4, 1942, a firebomb fell on the prison camp's clothing warehouse. The possessions of 30,000 prisoners stored there were destroyed. The prior of Nijmegen, Father Verhallen, kept this file in his room together with the letters of Father Titus and the witness statements.

3. Saved by the Gestapo

On February 22, 1944 Nijmegen was bombed. The Carmelite house, where Titus had lived, was hit but did not burn down. On July 13, 1944, during a search of the house for something totally unrelated, the Nazi police discovered these documents of Father Titus in the prior’s room. This aroused their interest. Although Father Verhallen told them that these had been sent back to the Carmelites by the Gestapo, they took everything with them.

On September 17, 1944 the battle for Arnhem started. The City of Nijmegen was deeply involved in this battle. The Germans retreated into Nijmegen and on September 18,  the Carmelites were given 20 minutes to evacuate the monastery. It was then set on fire by the Germans and totally destroyed. But the documents of Titus Brandsma had already been confiscated by the police.

A Spirit So Pious, So Holy

A few days after May 5, 1945, the prior in Nijmegen, Fr. Verhallen, heard that a well-known lawyer, Mr. van Velzen, connected to the court of appeal in Den Bosch, was in possession of this file. Van Velzen, by request of the Diocese of Roermond, had worked to aid some of the clergymen who had been arrested. This is how he knew Professoor Nelis, the successor to the Nazi interrogator, Hardegen. In the critical days of September 1944, van Velzen visited him in his villa at Zeist. During that meeting, Professor Nelis was called to the telephone. He returned a little later, pale and shocked. “We have to leave,” he said. “We now have strict instructions to burn everything.” He brought out a pile of files. “I can burn all this because it is all rubbish, but there is one that is something special. It expresses a spirit so pious, so holy, that I shy away from burning it. I gather from the file that they are trying to have him canonized. I don't know what to do with it, I can't keep it and I'm afraid to destroy it.” Mr. van Velzen offered to take it with him and hid it at his home under the carpet, where it remained until the south was liberated. He handed everything over to Fr. Verhallen.

Although these do not relate to the resistance and martyrdom of Titus Brandsma, they are of great value to our knowledge of who he was, his activities, and his commitment to Dutch mysticism. In the process of canonization, they comprise 136 volumes. They were located in Father Titus' study, which was sealed by the Siecherheitspolizei on January 19, 1942. After the house search on June 13, 1944, these writings were taken to safety. The seals of the room were broken and everything was taken to Boxmeer, where an industrialist, Mr. Hendriks, stored them in the refrigerators of his factory. For most of the winter of 1944-1945, Boxmeer lay on the war front like a “no man’s land:” under the Americans by day, under the Germans by night. The residents were evacuated, their property looted, but the writings of Titus Brandsma remained unharmed and were returned after the war.

All these documents are now in the Dutch Carmelite Institute. Through miraculous ways they have been preserved: happy coincidence or providence?

Posted by The Carmelite Library at 18:58