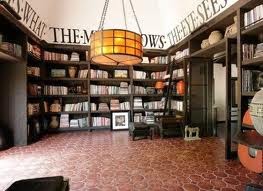 They say that your books define you. Your library is a sign of what you really want, as well as what you wish to keep out, or avoid, or deny, or have no use for, or don’t believe in. The books you want beside you all the time are the books that must mean the most. We know the feeling of reading something utterly beautiful or brilliant or unforgettable and wanting to have all the works by that person, in the hope of enjoying even more beauty and brilliance we will never forget. I once read a novel by the unknown Englishwoman Ivy Compton-Burnett and was so stunned by its verbal originality that I had to order more and more of her fictions until Miss Compton-Burnett became quite the best known Englishwoman in the neighbourhood. Her interviews and biographies increased the enjoyment because they were about her while being written in English that was unlike hers in every way. Ivy moved at a noticeable pace along the walls. Eventually though her skills with laconic dialogue and sparing, usually unsparing, adjectives grew familiar, thus leaving me with a long shelf of Compton-Burnett and a strong desire to read Joseph Conrad. This is how personal libraries grow. The question being, if Conrad hadn’t stepped in to save the day, would I have kept on ordering books even remotely connected with the formidable life of a moderately famous Englishwoman? Where would it all end?

The American character actress Diane Keaton likes taking photographs. She emulates the behaviour of her heroes Diane Arbus, Garry Winogrand, and Lee Friedlander, going around the place taking art pictures, especially of building interiors, with her Rolleiflex. She has collected photography books for years, even admitting this week in The New York Times that these books encourage many fantasies. One, though, stands out. Ms Keaton says, “I’m still trying to turn it into a reality. This is it: Purchase every photography book ever published. I know, I know — ridiculous. But so what?” So what, indeed. While some would accuse Diane Keaton of conspicuous consumption, of succumbing to the capital sin of gluttony, or both, her reverie (for that is all it is, “ridiculous”) is readily understood by many book lovers. It is not the books themselves but the type of book that is important. The desire to collect all the books of a certain kind together is no more than the normal feeling of someone with an admiration or passion or fascination with that particular literature. I know someone who buys every book about Antarctica that he can discover. Another with every 1937-1939 Penguin first edition, which he arranges in number order in a special cabinet. What gives? What one does with every photography book ever published, once the objective reaches possibility, is anyone’s guess, but it is sometimes out of such madcap reveries that great collections start and mighty bequests are initiated. Being a woman of high intelligence, Diane Keaton already has an answer. “My mission is to buy an old warehouse I can transform into a massive library of image-driven books and open it to the public. Some of my new additions to this fantasy library include Mitch Epstein’s “New York Arbor”; Linda Fregni Nagler’s “The Hidden Mother”; the catalog for the Fraenkel Gallery exhibition “The Unphotographable”; and David Plowden’s “The American Barn.” What is charming about this proposal is her love of the individual title when compared with the scale of the proposed dream collection. The ratio of four moderately well-known American “image-driven” photography books up against the total of all photography books is a considerable fraction. However, given that she is a well-paid actress with backing as well as backbone, Diane Keaton may establish her warehouse sooner than expected.

Posted by The Carmelite Library at 21:08