An Exhibition of Superlative Books: The Largest Book in the World

Last year’s library conference included a 12-day global tour of famous and not so famous libraries, all at the safe distance of our screens. This year I’ve decided to put on an Exhibition of Superlative Books. Over the next twelve weekdays the Superlatives will flow on the ANZTLA e-list, but also here on FB. I hope you enjoy the posts. Here is the Exhibition Guide for the space called Largest. Text by Philip Harvey. 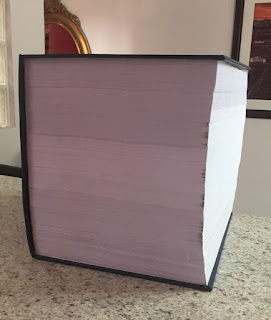 One of the largest books in the Carmelite Library is ‘The Red Book’ of Carl Jung (height 40 cm), which he called ‘Liber Novus’. It was published posthumously in 2009, a private collection of psychological experiments from 1913 to 1916 that were instrumental in the foundation of Jung’s theories. The Library also holds a reader’s edition translation in handbook size, devised to assist study of the larger volume. Days may be spent enjoying its calligraphy and hand-painted images, going deeper into the unconscious. Carl Jung would have had theories about the psychology of bigness involved in producing the largest book in the world. Why, not how, is a question we ask when looking at Exhibit 2, a colossal double elephant folio of Hungarian flower illustrations: https://www.youtube.com/watch?v=A06biAs4p9M Or there is the largest book of poems in the world (pictured), made by the Puerto Rican Rafael Morales Rodriguez, which crushes the very concept of the slim volume of verse. Morales boasts that in its 4498 pages the word ‘love’ appears 7027 times and the word ‘heart’ 5238 times. How we are meant to read the book, or create the intimate space associated with reading poetry, is not explained. Guinness says the largest book is a 2012 compilation of stories on the Prophet Muhammad created in Dubai and measuring an impressive if unmanageable 5 m x 8.06 m and weighing approximately 1500 kg. (pictured) The Carmelite Library does not have the doorway that could give access to this book. Indeed, there are books that require the room, or even the entire building, to be custom designed to house them. For some people though, it depends what we mean by a book. One of the largest integrated set of texts is incised in stone and rests in a religious compound in Mandalay in Myanmar. Housing this book was part of the book’s actual manufacturing plan. It is a stunning production, though some would argue that is not a book, that’s a pagoda: https://asuitcasefullofbooks.com/kuthodaw-pagoda-the-biggest-book-in-the-world-vlog/ Indeed, once we start expanding the definition of the word ‘book’ itself, who knows where it might all end? The largest book could be the building that houses the computers that record the input of the millions of diarists who freely contribute to Facebook. This is somewhat incomprehensible to the imagination. The four petabytes of data generated each day on Facebook is stored in what is known as the Hive. Online is coy about the geographic location of Hive, but it is available to us on our gadgets and we can read it every day. Those with a metaphorical turn of mind might say the largest book is the universe itself, that which all books strive to explain in larger or smaller measure, continually in a state of creation, there for us to interpret. The loan time is a lifetime and access is free. 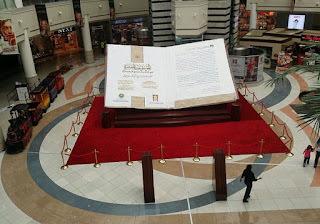 Posted by The Carmelite Library at 01:51