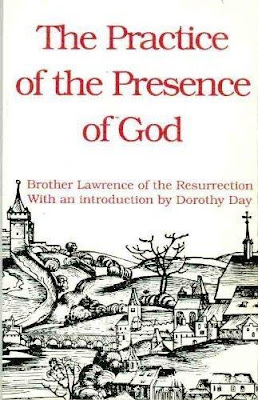 This conversation will explore:
·         A brief overview of his life – some background.
·         His writings - The Practice of the Presence of God. This will include some time for personal reflection  to read his letters.
·         His appeal and relevance today (400 years later)

There lived in his time several spiritual luminaries whose wisdom still guides people today. Francis de Sales’ ‘Introduction to the Devout Life’  is a book written by Saint Francis de Sales.  Blaise Pascal, Madame Guyon, and Francois Fénelon. Jean Pierre de Caussade (1675 – 1751), French Jesuit priest and writer known for the work ascribed to him, ‘Abandonment to Divine Providence’,  his ideas on the spiritual life and  guidance for daily living in communion with God.

Biography (1614 -1691), Carmelite lay brother
Little is known about him.
Born in the region of Lorraine, Eastern France.
Humble parents, did not have enough money for sponsoring an education.
Some form of “home-schooling” by a parish priest (Lawrence) .
A connection to the Discalced Carmelites through his Uncle Jean Majeur.

The Practice of the Presence of God
Brother Lawrence's letters are the very heart and soul of what is titled 'The Practice of the Presence of God'. All of these letters were written during the last ten years of his life. Many of them were to long-time friends, a Carmelite sister and a sister at a nearby convent. One or both of these friends were from his native village, perhaps relatives.

Father Joseph de Beaufort gathered as many of the monk’s letters of spiritual direction that he could find, along with four conversations that people recalled from their meetings with him, and these were published as ‘The Practice of the Presence of God’ - including four recorded conversations and spiritual maxims

·         The basic theme of the book is the development of an awareness of the presence of God.
·         All was published after his death, as he insisted on total privacy during his lifetime.
·         Structure:
·         Part 1: four conversations - Brother Lawrence and Abbé Joseph de Beaufort. Part 2:  fifteen letters from Brother Lawrence's personal correspondence.
·         Tone-formal and detached. Sense of gravity.

This book promotes no spiritual method or technique, except that of ongoing prayer. There is little patience for methods, devotions and mortifications .
The book is more like a conversation between two friends over coffee .
It has an immediacy and intimacy that is both blunt and refreshing. It is a spirituality that is best practised in the small rooms of our ordinary lives.

Theological Criticisms - Quietism
Quetism is set of Christian beliefs that had popularity in France, Italy and Spain during the late 1670s and 1680s.
Quietists had something of the Stoic about them, a passivity and silence in the face of outward events: to suppress, rather than submit to a loving Father.
Strove to crush their own will, and any desire—even the desire for salvation—so that God could bring about whatever he desired without impedance from the human.

·         Irreconcilable with our relationship to God in the Scriptures  which teach us to seek, request,  wrestle, e.g. Doubting Thomas,  Garden of Gethsemane (ultimate anguish), death of Lazarus.
·         The doctrine of the Incarnation (God revealing Himself in Christ)  appears as a ‘blind spot’.
·         Quietism was condemned as heresy by Pope Innocent XI in the papal bull ‘Coelestis Pastor’ of 1687.

Reflecting on the Letters of Brother Lawrence (handouts)

Simple Spiritual Wisdom - Principles
Have a conversation with God. "If we only realized how much we need God's help and how much He wants to bless us, none of us would lose sight of Him, not for a second."
Develop a conscious life. Become aware of noticing where you are, what you are doing.
When facing pain, disappointments and the mundaneness of life – surrender to  God’s presence!

·         To keep God in mind at all times and to trust God as much as possible,  no matter how mundane or routine, was the medium of God's love. The issue was not the sacredness or worldly status of the task but the motivation behind it

·         We must fully recognize our spiritual poverty, our incapacity, and accept this condition.

·         Brother Lawrence developed an ability to live each moment in the Presence of God.

We must have confidence in God, in order that He may accomplish in us what we cannot do by our own powers. This path to this perfect union was not easy. He spent years disciplining his heart and mind to yield to God's presence. "As often as I could, I placed myself as a worshiper before him, fixing my mind upon his holy presence, recalling it when I found it wandering from him. This proved to be an exercise frequently painful, yet I persisted through all difficulties."

Posted by The Carmelite Library at 21:24

Email ThisBlogThis!Share to TwitterShare to FacebookShare to Pinterest
Labels: Brother Lawrence of the Resurrection, Damien Peile