Ways of Reading the Bible (1): Sarah Ruden and the translator’s impossible task 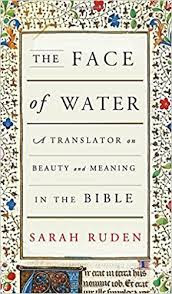 This review by Philip Harvey first appeared in the March 2018 issue of The Melbourne Anglican.

In a world where literalism is allowed the final say, where religion’s foundational words are used for nationalist and divisive ends, we are moved to ask, as Sarah Ruden does, “Okay, the Bible – what about it?” How we read Scripture, our attitude to it, always remain significant issues, even if we say we’re ‘No Religion’. For Christians and Jews it can never be a matter of indifference.

Roaming in from the wilds of classical studies, Ruden was floored by a rediscovery: “The Bible, I recognised, was a book that profoundly mattered, more even than ancient pagan literature (in which I do have qualifications).” Some classicists would deem this a provocative admission, especially coming from an acclaimed translator of Homer, Aeschylus, and Virgil. (She’s the first woman ever to translate the entire Aeneid.)

Her objective is to introduce us to the biblical languages of Hebrew and Greek, and how they work, through the eyes of someone who was born to translate. A combination of lightly handled erudition, poetic sensibility, and spectacular left-field humour turns this exercise into a reading pleasure. I never thought I could get mesmerised by explanations of vav consecutives or hapax legomenon. Her ear for metre is fabulous.

What to do with a literature where “form and content are inseparable, and equally important”? How to deal with language where “if we can’t dance to it, we don’t understand it’? How do you make that happen in English? Ruden describes the process with the Bible whereby she is “trying to make the book less a thing of paper and glue and ink and petrochemicals, and more a living thing.”

Ruden’s concern is how English, for all its vast vocabulary and intricate varieties of nuance, still cannot say everything being said with brevity and wit in the original. The King James Version (KJV) is her default “because of its beauty and familiarity”, but it too is oft wanting. Then there’s the whole dimension known as context, contexts at times “invisible”.

The book proceeds by exposition. Ruden chooses Old and New Testament passages that illustrate her own challenges and theories as a translator. She stands her versions against the King James, showing up shifts in meaning, accent, and pitch. We have space for two examples.

Ecclesiastes famously calls life ‘vanity’, the KJV repeating the Latin tag. Eugene Peterson, almost as famously, translates this word (‘hevleh-ka’) as ‘smoke’. Ruden’s word is ‘evanescence’, the thing at issue being insubstantiality, “a wisp of vapor or a puff of wind … blended back into the air, before you can even focus on it.” But she goes further. ‘Hevleh-ka’ matches in sound ‘helkeh-ka’ in the same verse, a word the KJV has as ‘thy portion’. In other words, whoever you are and whatever you own, it’s all evanescence, saith the Preacher.

‘Rei-a’ is a Hebrew word Ruden calls “helpfully, dynamically untranslatable”. It can mean fellow, friend, equal, companion, member, depending on (you’ve heard it before) context. Indeed, it’s the context that provides the meaning, every time. In the Ten Commandments the KJV translates the word ‘neighbour’. And who is my neighbour? When a certain lawyer puts Jesus on the spot about who shall inherit eternal life, he finds himself in a context where the discussion turns on a definition of ‘rei-a’. But that’s nothing. Jesus tells a shocker of a story where the most reviled claimants to the lawyer’s own tradition are, by the lawyer’s own admission, neighbour to the man who was beaten up.  It’s the Samaritan who shows mercy. Ruden goes on to explain how the Greek equivalent (‘pleision’) adds further surprise and depth to the parable.
Last year, Sarah Ruden published her version of Saint Augustine’s Confessions. It’s good news for all of us that, according to her website, she now plans to translate the Four Gospels. Given the respectful and creative relationship to scriptural language on display in ‘The face of water’, both translation and any attendant critical commentary are sure to keep us on our mettle, and offer something new.
Posted by The Carmelite Library at 20:13