The EarthSong Library comes to the Carmelite Library 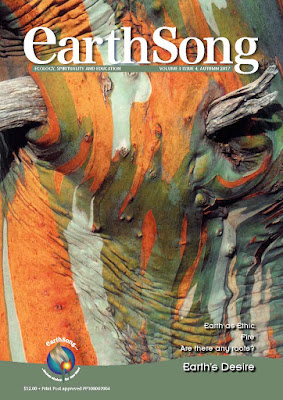 A Report written by Philip Harvey

At the end of last year the EarthSong Project closed after a journey of nearly fifteen years. One outcome of this decision was the donation of the EarthSong Library to the Carmelite Library. This means that the Library, in one week, became the best ecospirituality library in Melbourne. This is a great gift, it’s also a great responsibility, a great potential learning experience.

As its website explains, “EarthSong Educational Project emerged in 2003 from a conversation amongst members of several Religious Congregations wanting to explore the nature and power of the new universe story and its implications for an integral spirituality. The project was launched at Pipemakers Park on the banks of the Maribyrnong River on 27th July 2003.  In 2008 EarthSong: Earth Literacy and Earth Ethics Association became an incorporated body, governed by the EarthSong Council. In keeping with EarthSong’s vision seminars, workshops, retreats and programs for adults and senior students […] comprised the main focus of its activity. Since 2004, the EarthSong Journal offered Australian reflections on issues of ecology, spirituality and education.”

EarthSong’s sponsors were Brigidine Sisters Victoria, Christian Brothers Oceania Province, Faithful Companions of Jesus, Institute of Sisters of Mercy Australia and Papua New Guinea, Presentation Sisters Victoria, and the Passionist Congregation. Later Anne Boyd csb, one of EarthSong’s Project Co-ordinators, established an Ecospirituality Reading Group at the Carmelite Centre in Middle Park, a group that continues to meet and share knowledge, a group to which all are welcome.

The library of EarthSong expresses the many interweaving interests of its original mission. If our concern is for the future of the planet and our place in that future, then these are not minority matters. We are each called to think differently about our living environment, to learn about the changing knowledge we have of the big picture of the Universe, right through to the most local and intimate networks of interrelated being.

So there are many books on that most ancient of disciplines, Cosmology, its history and theology, brought up to the present in which we analyse and synthesise the discoveries and theories of science. Science and religion are no longer contending opposites in some unholy battle for a correct view, but elements of the same human desire to know and understand. Brian Swimme, Mary Evelyn Tucker and Brian Ferris rub elbows with Bill Plotkin, Steven Chase, and John Haught.

Hence also the broad ranging literature on Darwinism and all that followed. Most Christians today accept the theory of evolution. The question for some time has been how to appreciate the changing positions on evolution in the light of Scripture and Tradition; how to conduct a constructive dialogue about its reality. EarthSong library contains dozens of authors and thinkers working in the field. Historically significant amongst these is the French Jesuit mystic Pierre Teilhard de Chardin, whose observable recent rehabilitation within the Catholic Church comes at this time of cosmological and environmental dialogue. The realted events are apparent every day in the papers, how to think and address the presenting issue for our world of ecological crisis, a crisis regarded by many as a First Order issue, given that it threatens what we know of the created world.

Pope Francis’ encyclical ‘Laudato Si’, with its emphatic Franciscan title, is one of the major world documents in response to the “inconvenient truth” of climate change and ecological degradation. The EarthSong Project predates this encyclical but its library helps explain where the Pope is coming from and how to read and respond to his words.

Attendant upon this teaching is the general and worldwide activism, as distinct from do-nothingness, that serves to protect and restore the Earth and the sanctity of Creation. This understandably takes political and social forms, as well as theological and philosophical forms. The collection also contains important works on ecology from all the major faith traditions.

The slogan ‘think globally, act locally’ is a rule of thumb for ecospirituality. We are going to begin where we find ourselves, which is frequently in our own backyard. The library contains many books on Australian environment, whether fauna, flora, geology, or climate. The Carmelite Library collects materials on local history and geography, so there have been many adds on the life (in every sense of the word) of Melbourne and that large expanse of water just down the street, Port Phillip Bay. Any books on local Indigenous culture, history, and religion are added as a matter of course. Aboriginal spirituality is a constant commitment in the Library’s collection development.

Related to this is Australian nature writing, much of which speaks of the intimate connections we have with our own environment.  EarthSong collected widely in this genre, for example Geoff Lacey, Patrice Newell, Mark Tredinnick, Geoff Lacey, and Tim Winton. Some people regard the American Henry David Thoreau as a formative spiritual writer on nature and we have a very good Thoreau section, now further improved courtesy of EarthSong. But Thoreau is only one style of nature writer. Today the landscape is populated with writers putting down their words on the effect and condition of their natural world s. The spiritual life is enriched by the beauty and experience, but also the brutal honesty at times, of this genre.

Another philosophy that turned into a slogan is E.F. Schumacher’s ‘small is beautiful’.  Schumacher is one of several thinkers whose ideas have inspired movements and even schools of followers; such thinkers, not all of them instantly identifiable as religious thinkers, have had a major influence on ecospirituality. Writers in the widespread Sustainable movement are another example, including the Tasmanian Bill Mollison, one of the conceptual founders of permaculture.

The EarthSong library is a prized windfall for the Carmelite Library. It is a grand acquisition. The materials are being steadily catalogued and added to the collection, but it is you the reader of this report who is the future reader of these works and for whom they are being made available. The windfall is also a developing research resource for the University of Divinity, which this Library serves.

Posted by The Carmelite Library at 19:25