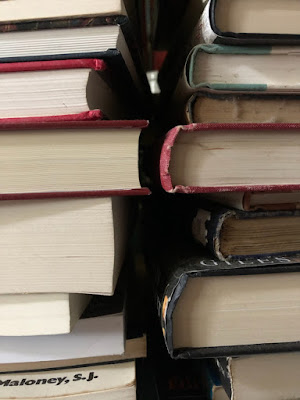 In sorting large Catholic donations of books, there is going to be the gold and the dross. The gold can be some unremarkable looking book in pale blue cloth cover, long worn, that happens to be the only copy in the country. The dross can be something that was a sensation when it appeared, a copy on every shelf, and the talk of the town. The talk has faded.

Donations boxes disgorge the sameness of some of this Catholic literature. Every religious house had to order a copy. Catholic libraries were required to collect the same until it became very much all the same. Theology courses got class sets that now cascade from the boxes in their all too familiar jackets.

A good example of a subset is the literature that emanates from the Vatican machine, that eddies around it like the Tiber after a big storm, the never-ending flow that pours from the Eternal City. Reaching over a billion people is no easy task, the presses run hot. Language is no barrier. The wash-up in donations boxes can best be described, in library terms, as papal pulp.

Being amongst other things a solid Catholic library, the Carmelite Library already accessioned most of this stuff when it first came out. It is held in other Catholic libraries, where it easily accessible. Much of the crucial material is online via the Vatican net service and other reputable sources. The books have become of purely research interest only. One copy of each is sufficient.

There are large glossy reports of international tours, with colour photographs of the pontiff kissing the tarmac, laughing with the president (or even the monarch), visiting a shrine, admiring a national monument, and lecturing a roomful of priests. Encyclical booklets topple like a waterfall from the boxes, leaving us to ask how many copies we need of Humanae Vitae before we get the gist. Biographies of popes are a major industry, or at least keep a lot of authors industrious, but the half-life of these works after their time has come, is brief. The Second Vatican Council continues to have its commanding and disputatious outcomes discussed, but there is only need for one set of the official documents, not one hundred.

We already have all of these. We don’t need more. Nor does anyone else, in most cases. So, what to do with papal pulp?

The librarian must engage in an act of discernment. Huge souvenirs of papal tours serve an historic function, so we are on the lookout for rarities that a researcher may find useful, especially in Antipodean settings. Encyclicals and other papal statements are all online, but one print copy of each is added to the collection; we know they are borrowed. Biographies of popes fall into the categories of Before and After. Death, that is. Biographies written in their lifetime could be described as careless raptures, explanations, propaganda, updates, political point scoring. Very often their purposes are purely ephemeral. Retrospective biographies raise new questions, make assessments, grapple with larger social and political implications. The biographical literature of Pius XII, for example, booms because of that pope’s role in the events of the Second World War and its aftermath. Everything of significance about Pius XII is added to the collection, though the majority of popes seem to have a way of fading into the past, like the pages of their biographies.

Of course, behind all of these scans and scruples, these prevarications and judgements, lies another concern. It is one shared by many librarians, expressed in the final lines of Amanda Witt’s sonnet on the subject. Are we committing a sin by disposing of these extras? Shouldn’t we be saving all of these works, even if no one is going to use them?

Some books are set aside,

We are on a wild ride

And cannot be meek.

Some books the library already holds,

It is checked all the same,

By the title, author name

For others I hear “It’s gold!”

Then the books that make us gulp –

Numerous copies, all the same

These become the Papal Pulp,

In the Disposal Game.

Out the door they go, and in the bin

Posted by The Carmelite Library at 17:42