On the 17th of March Philip Harvey conducted a Spiritual Reading Group on Thomas Merton. Pursuing a biographical line, poems were read and discussed that identified nine different aspects of Merton’s life, self, and work. Each aspect was illustrated by one of his photographs. Here is the text, with comments from the group about the poetry. 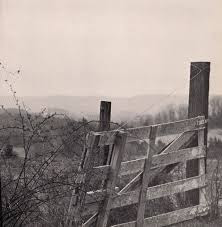 The monastic town of New Norcia in Western Australia has at least five libraries. I have visited all of the main ones, including the actual abbey library used by the monks every day. My most profound discovery was to find that they read all the latest magazines, newspapers, and social commentary. They are amongst the most well-informed people in Australia. I say this because we can say the same of the Cistercians at Gethsemani: they knew everything that was going on outside the walls, if they needed to. This is good to remember when we read anything Merton wrote on social and political activism, and there is a lot.

His protest poetry, if that’s a way of naming it, stems from realism, a desire to say things as they are, and justice, a desire to call out injustice and right that which is wrong. Look closely enough and again we find Christ as the original inspiration of the words, the maker of change from within, stepping into the dangerous places where violence begins. The 11-page prose poem ‘Original Child Bomb’ (1962) is a strategic takedown of the making and use of the atomic bomb. That poem is too long to read here today on zoom, and likewise the book-length poem ‘The Geography of Lograire’ (1968), a remarkable exploration of the spirit through time that, amongst other things, defuses the concepts of racial and religious divides throughout history.

Instead, I will read one of Merton’s short anti-war poems, a deadpan view of warmongers that exposes their cynicism while reminding us that there is a future while the voice of hope rejects their oppressive power. We may take it as given that Von Clausewitz, Napoleon et al, these representatives of war theorists, war mongers and practitioners, will be found at the Stock Exchange. Where else? A parade ground? Seriously? Their names are interchangeable and we will meet them again in the same location. At first we may regard the poem as cynical or despairing. This cycle will never end. But hope and opposition is present around the corners. In fact the poet Merton grows weary of their conversation. Unlike them he has other places to go. Ominously, some would say, he indicates that that they have the power to kill him too. The future is unwritten and unknown. He will go where he will. The priorities of those with power to wage war are demonstrated by naming boulevards after them, as we in Melbourne know who recognise a couple of the names. The poet stands as a witness to the wrongs being perpetuated by those he talks with. The poem shows its time period with the word “deter”, a relatively new concept in global military strategy at the time, but one that is still with us today. On a literary note, the poem seems to me to be possibly influenced by Merton’s reading of James Joyce’s ‘Finnegans Wake’, a book he had been familiar with since university days. Wellington, Napoleon and the rest play parts in that novel, as archetypes of the sort of thing Merton is saying in simplified form in this poem.

The Great Men of Former Times

At the Stock Exchange

What are you doing here?”

“I have nowhere else to go

Nowhere else to go.”

The Duke of Wellington,

And many others with the names of Boulevards.

They all said the same.

And I said to Clausewitz

At the Stock Exchange:

That all the wars are over?

We fight no more:

It is sufficient to ‘deter’.”

“You are wrong, and we will prove it

We will prove it by killing you.”

The Duke of Wellington

And many others with the names of Boulevards,

They all said the same.

Then I grew weary

With these great men of former times,

And quickly leaving them

Went far from the Exchange

But I know that tomorrow

Or the next day

Or indeed next year, if I return,

I will find Von Clausewitz again

I will find him there again.

The Duke of Wellington

And many others with the names of Boulevards

I will find them again.

Posted by The Carmelite Library at 18:42